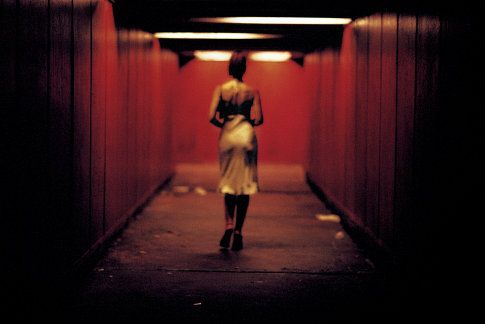 Wonder of wonders, the violent French, art-house crypto-porn is now a full blown genre. We Ruthless folk just can’t get enough of this stuff, and based on the number of hits we get for reviews of relatively obscure movies like Romance, Baise Moi and great movies like The Piano Teacher, neither can you. Then again, our our most popular review last month was for Porn n’ Chicken. What the fuck’s with you people? So, anyway, the question about a film like this is always, how much of the film is art and how much is some Euro realizing he can make a name for himself by throwing a couple of schlongs on the screen.

I’ll call this art. Really, the amazing camera work and cinematography are sufficient reason for me to attach the “art” label, but I’ll do so even apart from those attributes. I’m not surprised to have liked this film because a) Unlike most pro reviewers, I recognized Gaspar Noe’s talent way back when you’d never heard of him b)
Slate’s David Edelstein called this the most homophobic film ever made. I’m not homophobic (well, not very much) and I don’t think the film is. But when people begin inventing self righteous reasons to condemn something, I usually like it.

I’ll begin with the opening credits, which run backwards, then off center to deep resonating sounds. I liked this for the simple reason that it was artistic. Yes it was effective too, setting a deeply ominous tone, but I watched and thought, “wow, Noe’s really trying. His goal is to be an artist, not to get picked up by Sony, make Larry King’s ten best list and be invited to direct the next Harry Potter film*.” The ambitious credits are indicative of the overall ambition of the film.

But on to the content that has everyone abuzz. The movie moves backwards, kinda like Memento. Here the backwardness of the story contributes to a general assault on the viewers, grating on our expectations and sense of order. Also it allows the violent culmination of the film to actively taint all that leads up to it, so we really don’t have a moment’s peace. That violence is, of course, the hot topic. First is a brutal murder. A man is beaten to death with a fire extinguisher. This scene is one of the most disturbing I’ve encountered in film. I remember showing the end of Casino, where Joe Pesci is beaten to a pulp with aluminum baseball bats, then buried (somewhat) alive, to a class in college. The majority of the students looked away from the screen at some point. The beating in Irreversible is far worse. There are no edits or camera movements to protect us as one man literally bashes in the head of another over a minute or so. Incredibly realistic, this scene reminded me of the time I made the mistake of watching Traces of Death.

Before long, we see the motivation for the beating. The girlfriend of the men who carried out the beating cuts trough an underpass at night, comes across a man beating a transvestite hooker and pauses long enough for the man to trap her. He anally rapes her for several minutes, saying things like “are you wet or is that blood?” then beats her into a coma. So, you can see why her friends were so upset.

So what about all this? Is it homophobic? Not really. The rapist and/or the man thought to be the rapist is basically gay, but on a power trip. The club where the murder takes place is a gay leather club called The Rectum. The name of the club is part of a tunnel/ass motif, and if we want to get even more symbolic, the site where the
story of the film, having passed through outer tubes and tunnels completes its journey like a piece of digested food. Maybe you could even say people are ultimately shit. Yeah. So, the gay leather club is a scene of disturbing depravity, which, I’m sorry, just can’t be too far off the mark. Also, the evil rapist is gay. What, gays can’t be evil? Jeffery Dahmer anybody?

So, visual beauty aside, why is this film art and not just shock? Well, the two aren’t mutually exclusive. You can shock artfully. People were shocked by Psycho. In 2003, it generally takes a little more. The content of this film is shocking in its own right but Noe doesn’t just say “look, a bashed in head!” The film making conveys the darkness of the events and of the minds behind them. The blunt depiction of these acts, along with outstanding acting, allows us to see how far they really go. We see every decision and action on the part of the characters, as well as the consequences of those actions as they unfold.

Anyway, I liked this one. Maybe these films everyone likes to call “nihilistic” are just the new horror films. Who is actually afraid of the Werewolf these days? Maybe the occasional Pentecostal. But the dark side of humanity- the eroticism of rape and our capacity for animal violence can be pretty chilling stuff, not to mention the films slogan, that “time destroys all things” and is certainly worth artistic exploration.

*I know this sounds like a dig at Y Tu Mama Tambien, but it isn’t. Maybe it’s a little bit of a dig at that film’s director, who really will be doing the next Potter movie, but if they offered me $10 million, I’d become a member of Spice Girls II, so who am I to play the snob?