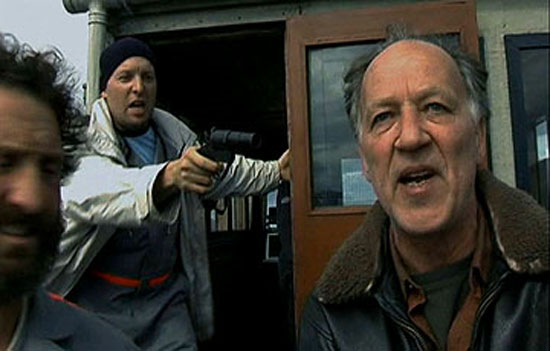 Written and Directed by Zak Penn

Oh Boo-Yah-Tay this was a good one! Honestly, it had me rolling around on my couch laughing for almost the entire time–which is no small feat! Zak Penn’s truly inspired Incident at Loch Ness is about as much fun as you can have for a $2.50 rental fee. Equal parts cruel, thought-provoking and funny, the movie was far better than I was anticipating. Add to the mix the great Werner Herzog and a really scrumptious cast of co-stars, and, well, you have an amazingly enjoyable “mockumentary.” Orders of magnitude superior to Pauly Shore is Dead at any rate. Humor-wise, this shit is drier than even The Office.

And it would probably help if you knew a thing or two about not only how shallow and without scruples Hollywood is, but a bit about Herzog’s legacy as well. At this point in time, if you don’t know anything about
Herzog, well, consider yourself stupid. Oh, and for you stupid folks out there, you probably won’t like Incident at Loch Ness too much, if at all…

The film starts at Herzog’s house in Hollywood. A film crew is making a documentary about the great German director. Instantly, the viewer is disarmed by his soft-spoken, philosophical manner. His is self-depreciating to the point of what seems to be implausibility. Yes, he admits that he made such cinematic colossi as Fitzcarraldo, Heart of Glass and Aguirre: The Wrath of God, but it seems as if Herztog feels that the movies made themselves. He was just there with his camera. He is not special; just damn lucky. Bits of memorabilia dot the walls of his office and before too long we see photos of the famous cryptoid Nessie; the Loch Ness Monster. Herzog explains that his next project will be the making of a film about why humans need to believe in these unknown monsters.

In the typical Herzogian manner, he wants to explore what it is about our psychological makeup that produces myths of this kind (Nessie, Bigfoot, the Yeti, the Phoenix, Chupacabra, etc.) in all cultures found on the planet. Or so he says. Regardless, the film crew will be going with him to Scotland.

Enter Zak Penn. For those of you who are not fortunate to live in Los Angeles, Mr. Penn portrays the perfect
example of a Hollywood Cocksucker. Vain, full of shit, deceitful, duplicitous, woefully uneducated, selfish–you name it, and Zak explores and embodies it completely in this film. And, he is a real life screenwriter, having penned such marbles as The Last Action Hero, Inspector Gadget, X2: X-Men United and of course the sad, sad, sad Elektra. 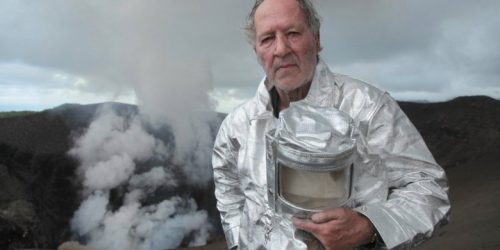 As you might have guessed, walking out of the video store, I had grave reservations about renting a film not only starring but written and directed by Mr. Penn. I am beyond pleased to report that it is obvious he only writes the previously mentioned shit-storms for large sums of cash, for Incident at Loch Ness proves that Mr. Penn is one
smart and capable cookie. Still a money-grubbing Cockscucker who feels no remorse about filling the culture with unwatchable, vapid detritus, but definitely smart and capable. Penn comes to Herzog’s joint and it turns out he is producing the film about Loch Ness. For his part, Herzog seems almost tickled by the idea of having real “Hollywood” money behind one of his projects. Penn–though he seems only to be paying lip service to Herzog’s towering greatness–says he is enthused to be working with a living master like Herzog.

We also meet Gabriel Beristain, a “big budget” director of photography who usually works on eyesores like S.W.A.T. and Blade: Trinity (though I do need to admit that Blade IIwas rather beautiful). Gabriel is of course going to shoot Herzog’s film. Also gathered at the party are Ricky Jay, Jeff Goldblum and Crispin Glover. Why? I don’t know, but Goldblum was his typical batty self and I guess their presences lent the necessary air of absurdity to make the film feel light-hearted. At first. Almost immediately, Herzog and Penn get into a disagreement about money and Gabriel raises some sort of technical issue about the size of his light-pack, that not only was supposed to be hidden from Herzog, but that upsets Herzog very much. Why, he asks, would you need a big Hollywood lighting rig for a documentary? Where is the verite in that? Indeed. Curiously, not a single woman present (everyone brings their wife or girlfriend) says boo. If it was intentional, all the better, but if it was an oversight, it leads me to believe Penn’s special lady was a beard. Anyhow…

They get to Scotland and the problems begin to mount, and fast. In one of the most hilarious scenes, the sound guy is complaining about the noise from the boat’s engine. He suggests doing what was done on a big budget film he worked on; put a tow boat about five hundred yards ahead of the actual boat and that will make things nice and silent. The crusty old Scottish captain balks at the idea. Zak suggests taking the engine out of the big boat and replacing it with a smaller one. The captain again says, “no.” Zak then begins in on a speech, the cruelty and gravity of I have only witnessed in person once–when TAWP was convincing an uncertain “actress” that ass-to-mouth is OK because it’s not really real. Zak basically says fine, don’t replace the engine; he’ll find a captain that will. But the way he says it is so zealous, so calculated… it was just creepy. Needless to say, he fixes the cable. Once the boat is underway, Herzog asks if it can go any faster. The captain bluntly says, “no.” Also great, were the expedition jump suits that Zak had specially made. Not only does Herzog refuse to wear his, but Zak spelled “Expedition” on the back wrong. Probably the funniest bit of nonsense Zak pulls is the mystery sonar operator,
played wonderfully by the surprising Kitana Baker. For the three of you out there who are not reprobate perverts, not only was Ms. Baker playmate of the year, but she was the brunette in the infamous Miller Lite ad. Yeah, that Miller Lite ad. Herzog comments, “I didn’t think she looked like a sonar operator.”

More and more it becomes obvious to everyone involved that Zak has ulterior motives; that he is actually trying to “sex up” Herzog’s film and make it his own. This is totally brilliant because if Zak’s intention was to truly portray a soulless Hollywood cockasaur, there is no better way imaginable than trying to fiddle with Herzog. Just a hilarious and spot on concept. At one point, Herzog bursts into Zak’s office and tells him, “I know what you are up to.” Right as Zak is saying, “you’re overreacting,” an assistant walks in carrying a remote control Nessie. Zak covers his face in shame. I have to mention one more dude. At his house, Herzog asks Zak as the producer of the movie to find a him an insane yet sincere Cryptozoologist. The guy that Zak gets is so damn perfect… watch for yourself, but I promise you, worth the price of a rental. At one point, Herzog is on the bow of the ship, waxing
philosophical in front of the camera about, “What is it about this lake, out of all 10,000 lakes in Scottland, makes people see the Loch Ness Monster?” A rhetorical question, to be sure, but the “scientist” jumps into the frame, shouting manically, “because this is where the monster lives!” I’m not going to give away any more to you. I left out the best and funniest bits, which are simply fantastic. Hopefully, I have wetted your appetite for this wonderfully funny and unique film that deserves a much wider audience than it got. Oh, and if you think Zak Penn has turned a corner, I should let you know that he has already written Spy Hunter and X-Men 3.