Home / Documentaries / IMPACT: THE PASSION OF THE CHRIST

IMPACT: THE PASSION OF THE CHRIST 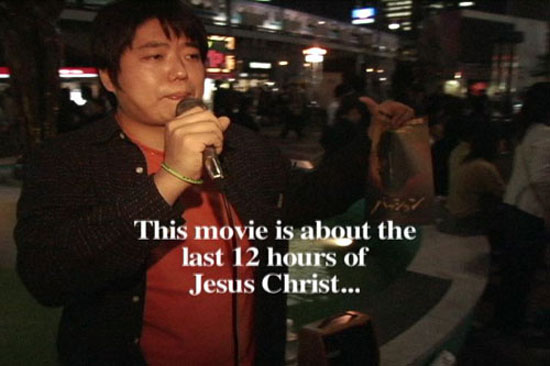 One of the least competent documentaries ever made, Tim Chey’s Impact: The Passion of the Christ would be deeply troubling if it weren’t so damn pathetic. I mean, the film indicts itself! On the surface of things, Impactis concerned with the worldwide reaction to the release of Mel Gibson’s anti-Semitic, cruel, bloody and quite bad, gay S&M snuff flick, The Passion of the Christ. But rather than being concerned with actual reaction, Chey (who previously made the Jesus-a-thon Gone) only interviews and talks to people who were pre-disposed to love Gibson’s horror-show. For instance, Chey and crew (I’m assuming he has a crew) travel to a Japan, a country that as he points out is only 2% Christian, to get “their” reaction. Who does he talk to about just how
important Gibson’s movie is? Why, the leader of the local Campus Crusade for Christ,
who else? Because obviously there is no way she could misstate any
impressions on the impact of the film upon Japanese society as a whole
(there were none). Of course, Chey will have you believe that ALL of Japan (and India, Britain and Norway) is now totally Christian as a result of The Passion of the Christ. Which is just silly. Only the highly anti-intellectual United States of America is possibly more religious as a result of Gibson’s film. And, like most terrible trends throughout history, it will pass.

Impact is filled with scene after scene of vile,
delusional religious wackos, each one more insane and ridiculous than
the next. Honestly, I would say that at least seven different “experts”
in the film said some form of the following, “I’ve read about the
crucifixion of Christ all my life, but now that I’ve finally seen it…” Folks, you didn’t see it. You saw a representation of “it.” In his most excellent book, Video Nights in Katmandu,
Pico Iyer talks about how for many people, the sign is more
important/real than what is actually being signified. To clarify, Iyer
explains that a common reaction of tourists (specifically American tourists) on lets say a riverboat cruise up the Nile is that things look almost as real as The Jungle Cruise
at Disneyland. Furthermore, the ride (i.e. the simulation) didn’t smell
as bad, you actually got to see every animal (no lazy, nocturnal
beasts) and there was no danger or risk involved. The fake and the
phony is perceived as more real than the actual. With The Passion of the Torture Fetishist,
we have a sign of a sign. History gives us not one single shred of
evidence for the existence of Christ (never mind the fact that “his”
deity status was decided via a vote at the Council of Nicea in 325 CE),
so the accounts of Jesus–the Gospels–are only signs pointing to
previous events, i.e. not the real thing; interpretations. Gibson’s Passion, therefore, is an interpretation of an interpretation. Y’all remember the game Telephone? The Passion is essentially a 2,000-year-old version of that.

Impact, as I said, severely indicts itself over and over
again. I have rarely seen a poorer collection of “experts” gathered
together in one film. Some of the non-starters include a Jews for Jesus woman waltzing around Alamo Square Park who says that Jesus was the greatest Jew of all time, and therefore The Passion can’t be anti-Semitic. Furthermore, since Jesus left “no corpse,” he wasn’t murdered! As Kyle on South Park said, “There’s no Jews in San Francisco.” Rabbi Daniel Lapin, a closeted Jew for Jesus and founder of Toward Tradition.

A group fully dedicated to remodeling the United States into a theocracy
just like Iran (only minus all Muslims and atheists)–goes on and on
about how not only is The Passion not anti-Semitic, but how
American Jews are anti-Christian and employ double standards. David
Robinson makes an appearance, explaining how he didn’t find the film
violent at all. Yeah, that David Robinson.
We also meet Pastor Greg Laurie, who reminds us over and over again
that it is Christians, not Jews, who are actually the only people being
persecuted in the United States and the larger world. Not Arabs, not
Mexicans, not gays, not blacks, not Native Americans–no. Only
Christians. I could go on (and I will) but suffice to say that Impact
is simply littered with dangerous, religious fundamentalists and
extremists. And lest you think I’m just loosely throwing around the
term “dangerous” here, as the great Richard Dawkins said,

To label people as death-deserving enemies because of disagreements
about real world politics is bad enough. To do the same for
disagreements about a delusional world inhabited by archangels, demons
and imaginary friends is ludicrously tragic…

…
The human psyche has two great sicknesses: the urge to carry vendetta
across generations, and the tendency to fasten group labels on people
rather than see them as individuals. Abrahamic religion gives strong
sanction to both–and mixes explosively with both. Only the wilfully
blind could fail to implicate the divisive force of religion in most,
if not all, of the violent enmities in the world today.

Which dovetails nicely into the next psychotic and Passion booster from Impact that I want to talk about; William Donahue. President of the supremely intolerant Catholic League and perennial Cocksucker of the Month
candidate, this bloviated gasbag has the physical appearance of a heart
attack crossed with a fart. Worse than his horrifying looks (and I
bring up his ugliness not because it has any relevance but because he
is such a jerk) is the man’s politics. Few pimping the backwards
policies of the right today are as vicious, as cruel, as mean-spirited
and as hateful as Donahue. The term Compassionate Conservative was concocted by conservatives to distance themselves from him.
The man is a humorless bully who recently took the insane step over the
cliff of rationality by demanding that “gays” apologize for AIDS. Chey
asks Donahue if The Passion is anti-Semitic. Donahue loudly
says that since it was Gibson’s hand driving the first nail into Jesus,
obviously the film is not anti-Semitic. Donahue also told Joe
Scarborough, “Hollywood is controlled by secular Jews who hate
Christianity in general and Catholicism in particular. It’s not a
secret, okay?” I guess Chey can be credited with bothering to talk with
one of the world’s foremost experts on Jew-hating. Who, by the way is
wrong about The Passion since all anti-Semitism can trace its
roots back to the Jews being blamed for killing Christ. But what do I
know; Donahue could hate Jews for entirely different reasons. Either
way, fuck him, and shame on Chey for featuring such a repulsive
hate-monger so prominently. 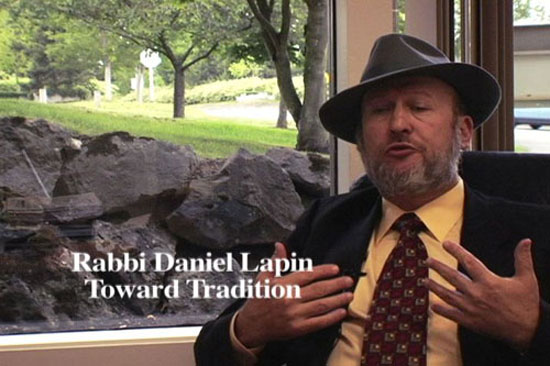 Most damaging of all, and most pathetic, is the insane amount of
screen time given to Dan Leach. For those of you who don’t know, Dan
Leach will be serving the next seventy-five-years in prison because
after seeing The Passion of the Christ, he turned himself in, admitting that he strangled his pregnant, 19-year-old girlfriend to death. That Chey prominently
features the repugnant little-puke is a bad enough error in judgment,
for Leach is quite obviously brain-damaged (hey, if Frist can diagnose Shaivo
based on 30 seconds of video footage, I can say a murderer is fucked in
the head after listening to him talk about how he’s now bathed in God’s
grace for 90 minutes). Chey actually greets him with “How you doing,
man?” and of course makes no mention whatsoever of the victim. What is
worse, and frankly sickening to me, is that in Chey’s mind, Dan Leach
will go to Heaven when he dies, and I won’t, even though I have not,
nor will I, strangle any pregnant nineteen-year-olds. And lets pretend
I wasn’t an anti-theist; even if I was an “observant” Jew, Chey would
still be certain that I would burn forever in hell and that Dan Leach
is going to be hanging out with God for all eternity. The hubris,
illness and irrationality he possesses are both staggering and
depressing. And he is far from alone. Chey also includes an interview
with Johnny Olsen, a neo-Nazi douche-bag who set off two bombs in Oslo fifteen-years-ago and then turned himself in. Apparently, murders are totally into this
Jesus shit. Personally, I would distance myself from any organization
that actively embraced killers. Not Chey though. He practically
fellates these guys. Of course, there is much that escapes Chey,
including the fact that Mel Gibson thinks all non-Catholics (including me, Chey and most Catholics who worship the fake pope) are all going straight to hell. 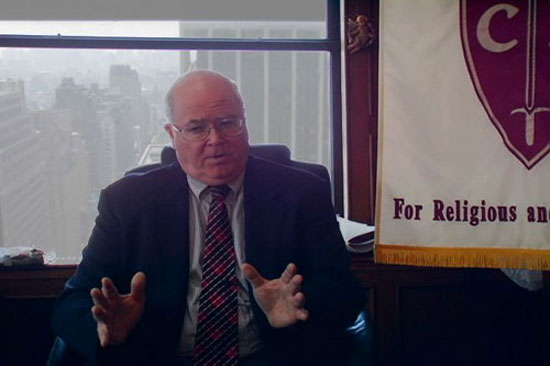 Admittedly, I didn’t watch the entire film. After an hour or so
of excessive nonsense, I could swallow no more. Those who know me, know
that it is a rare occurrence indeed when I turn a film off. Impact was that
awful, that stupefying and that pathetic. What clinched it for me was
the implication in the film that if Klebold and Harris had seen The Passion Colombine would not have happened. I’m not making this up. See, if Chey had only made a film about how The Passion affected already diseased minds (fundies and murderers), I would have
no problem. It might have even been entertaining. But he intended no
such project. Through a very myopic lens, Chey supplied all the answers
to any questions he might ask. Instead of research, this “documentary” is just re-stating. Worse, the caliber of lunatic he chose to bolster his case was low.
While attention-whores like the aforementioned Donahue dominated, Chey
also included nobs like Arch Bonnema, a glassy-eyed Jesus freak who not
only bought 6,000 tickets to The Passion at a Dallas theater,
but who without the slightest hint of irony pulled out the “some of my
best friends are Jews” card when asked if The Passion was anti-Semitic. If you do happen to wind up with a copy of Impact–maybe an annoying relative gives it to you as a gift–I would recommend using it as a beer or bong coaster, for the film serves no other rational
purpose.