There is one genuinely great scene in David O. Russell’s I Heart Huckabees, which involves an immigrant from Sudan, a Christian family, and two young men in the midst of crisis. These men — Albert Markovski (Jason Schwartzman) and Tommy Corn (Mark Wahlberg) have been invited to lunch by the African, who is a figure in Albert’s obsession with coincidence, which has led him to hire “existential detectives,” which, uh, really shouldn’t concern you right now. Tommy is a socially conscious fireman, who insists on riding a bike while on the job because of his concern for the world oil crisis. That also shouldn’t concern you at this moment. Finally, the Christian family is a group of those typical do-gooders, who have invited the African to America so that they can turn him into a pious, Jesus-loving young man who adores blue jeans and collecting autographed photos of famous people. While at the table, Tommy and Albert rip the family to shreds, especially for their hypocrisy and absurd belief system. Tommy is especially angry with the father, as he proudly drives an SUV, works as an electrical engineer (which clears away open space for factories and the like), and self-righteously defends his Christian charity, even though, as Tommy points out, the problems in Sudan are likely the result of the American policies of destabilization, exploitation, and bed-hopping with dictators. Tommy and Albert blast prayer, Jesus, and everything this typical all-American family stands for, that is before they are asked to leave. I go into detail here only because this scene represents why this film is so good and yet, so frustrating and, in the end, so bad. Huckabees, then, is a series of scenes, some of which work quite well, but fail to add up to anything worthwhile.

Billed as an “existential comedy,” Huckabees certainly has more ambition than your average film these days, but its elevated tone is outweighed by its confusion; almost as if it understood that what it sought to convey could not possibly be captured on screen. I have no doubt that this would have been far more successful as a novel, where extended riffs on the nature of self, existence, and reality would make sense and be fully, accurately explored. As presented in the film, there are fascinating beginnings, but too many loose ends that end up leaving viewers dizzy and desperate. A film need not reveal its hand on a first viewing, but it should allow the viewer to believe that subsequent screenings will flesh out more of the mystery. In the case of Huckabees, I have little doubt that I’ll be as dumbfounded on my fifth viewing as the first. It’s not that I don’t understand nihilism or the construct of meaning; I’m just not sure that the film does either. It’s a “greatest hits” of ideas — both probing and superficial — that send characters scrambling from board rooms to mud pits, all in the hope that despair can be countered with possibility. 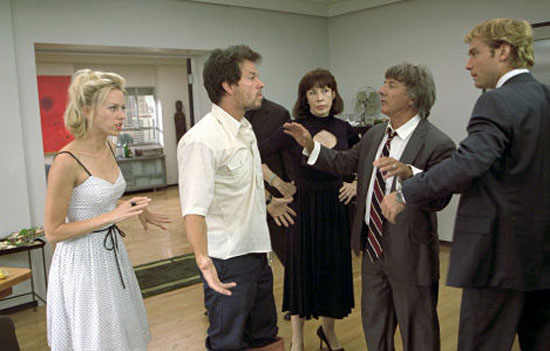 Dustin Hoffman and Lily Tomlin are Bernard and Vivian, respectively, a husband and wife team of detectives who follow subjects, take note of their lives (public and private), and report back with their findings. Each of their clients seeks to find that certain something that is “missing” — the void that we all feel compelled to define, whether or not it actually exists. As Bernard explains to Albert early on (using a blanket metaphor), everything is the same, and as such, connected. There’s a lot of New Age mumbo-jumbo about atoms and energy and stuff to provide evidence of our lot, but in the end, it’s really just a philosophical position that tries to promote good works and humanism without the hierarchical demands of organized religion. As best as I can tell, Bernard and Vivian’s work attempts to prove that we should care about others because they are going through the same things as us; sort of like a “what comes around goes around” mantra. Brad (Jude Law) might be a dick and ruining Albert’s life at the moment, but if we’re patient, the same things will happen to him and you’ll see that, well, we’re really in the same boat.

And then there’s French thinker Caterine Vauban (Isabelle Huppert), who is a reasonable, pessimistic sort; a woman who argues that we’re all alone in our suffering and nothing could ever mean anything as a result. We live and die without the world ever pausing to take notice, and it’s pretty much impossible to exert any real influence on world events. Futility and pain, then, rule the day. It’s fitting that such a character would be played by Huppert, who continues to knock me around with an undeniable allure. And if there’s anything sexier than Huppert speaking French, it’s Huppert speaking English with that delightful French accent. She’s so in control of everything in her vicinity that I’d never doubt a word she says. She walks with determination and fearlessness; quietly judging us because she figured it all out long ago. When she storms into the home of Albert’s parents, secures his diary from when he was a boy, and proceeds to rake his mother over the coals, I was transfixed by her fierce, unshakable power. But again, it’s merely a scene. Huppert also comes into play later in the film when she grabs Albert, leads him to a quiet clearing, and repeatedly slams his face into the mud. Before this, she cheerfully accepts Albert’s advances as he rubs dirt all over her leg (even reaching up into her skirt). And after Albert forces her face into the mud a few times, we watch briefly as he slams her from behind on a log. Two observations here: (1) Jason Schwartzman just might have more body hair than Robin Williams, and; (2) world cinema needs to find even more ways of inserting Huppert into crude sex scenes. As she’s our greatest giver and receiver of sexual humiliation, she simply needs more opportunities to shine. 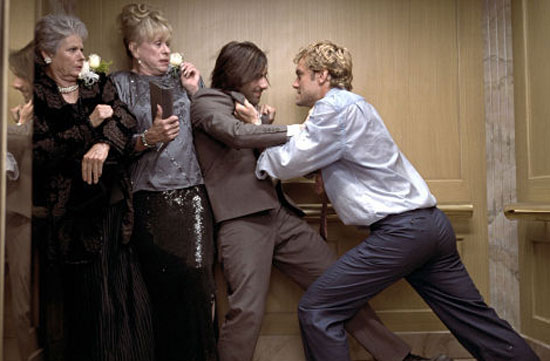 Naomi Watts also appears as Dawn Campbell, the dimwitted “Huckabees Girl” and official advertising voice. Before strangely “finding herself” by dressing down and “refusing to be beautiful,” she spends most of the time scantily clad which, although gratuitous, is one of the wisest directorial decisions of the year. Her character didn’t make much sense to me, but it’s only a case of her making less sense than the others. Everyone, after all, comes across as abstract and artificial; clever and witty, perhaps, but distant and remote nonetheless. And while I wasn’t overly fond of them or their plight, my feelings never turned to nauseated contempt, which, frankly, is what I expected going in. I anticipated a Garden State variety self-awareness, and was instead surprised by Russell’s relative restraint. He’s jerking us around, but somehow, it’s accomplished without the smug, film school superiority. The best way to describe this difference is to say that where other films might try to pass off their garbage as “real life,” Huckabees is content to be cinema. People aren’t really like this, and Russell might be inclined to agree.

But what the hell do I know? Impossible to categorize and just as difficult to penetrate, Huckabees might be at its worst when it seems (and again, I don’t know for sure) to undermine Huppert’s character by having her actually work for the existential team. She’s a front, really; a negative extreme that pulls people from their complacency, only to send them back to the shiny, happy inter-connectedness of Bernard and Vivian. At one point, Albert says that Catherine is “too dark,” while Bernard and Vivian “aren’t dark enough,” but it’s that “lightness” that Albert eventually reaches. Perhaps I’m projecting, but I find it less comforting that Albert seems content at the end, for throughout, hopeless despair always seemed more attractive and exciting. For me, the meaning of life has always been that there is no meaning, and that fleeting, momentary joys are the best we can hope for in a chain of confusing events that always ends in death. Maximize pleasure and minimize pain? Of course, but that’s not meaning so much as a strategy. Meaning can only be what an individual believes it to be at a given time, despite attempts by cultures and nations to dictate a larger scope. And yet, while I cannot escape the idea that relativism is an individual’s only way to make sense of existence, it just as surely is no way to run the world. The philosophical is rarely the practical, despite its pull. 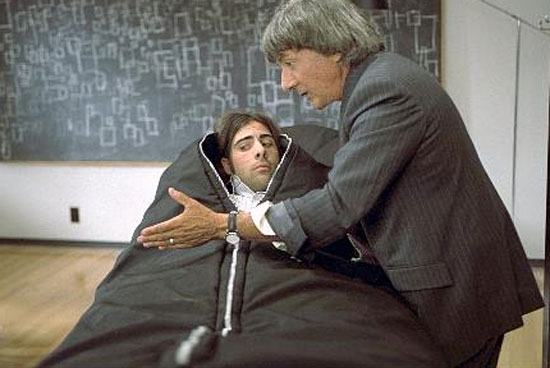 The film also throws in anti-corporate environmentalism, clever in-jokes (Talia Shire appears as Jason’s mother), and the truly disturbing image of Schwartzman nursing at Jude Law’s teat (I’d explain, but it might make even less sense). In all, it’s a grab bag of nonsense, profundity, silliness, and food for thought; all told with little regard for coherence, but high on its own self-regard. It’s both fun and taxing, lighthearted and pretentious; but it never really topples over completely. Had I the power to change the screenplay, I might have gone entirely over to satire, with the punch line that we’re all a bunch of fools for running after anything. For once, I’d like to be left with the notion that we’re all willing participants in the greatest con game ever devised. And yes, such a thing could still be funny. Hell, as Dr. Strangelove proved, we can reach the end of the line and still find time for a joke. One line, though, does manage to rise above the din: “Why do people only ask the tough questions after something bad happens?” If the film had the nerve to provide an answer, we just might have one of cinema’s boldest attempts yet to expose the very heart of our religious impulses, born again or otherwise.