‘Full house’ is a poker term. It’s for when you lose your wife in a card game and you have to invite an awful comedian and a struggling Elvis impersonator to move in with you just to keep from killing yourself.

They actually based an entire TV program off of this premise back in the 80’s. And boy was it a hit! It was my favorite sitcom for at least three years. I think this show actually taught me how to be a white person. It was like an instruction manual for losing a fight or tucking in your shirt. But when I turned about thirteen, I stopped watching it and moved on to Seinfeld, which made me really adept at comedy…and money.

I had forgotten all about this show until last night when I awoke from a sweaty hangover and decided to watch some TV. And there it was, raging on in syndication, with all its blinding Caucasian nuances. For those of you who are reading this from Eurasia or have decided to block this show out of your memory, let me recap for you:

Danny Tanner, played by Bob Sagat, has three daughters: DJ, Stephanie, and Michelle. Their mother is dead/out to sea/lost in a card game/whatever. Danny can’t raise the kids himself because he doesn’t love them enough to expend the required effort. Instead, he enlists the help of his two homeless buddies: Joey Gladstone and Jesse Katsopolis. Joey is a comedian and Jesse is a rock star in the same way I am a writer.

Anyway, they gladly agree to try raising little kids so they don’t have to sleep in their cars anymore and survive off malt liquor and potted meat. It’s a win/win for everyone, except maybe the people at the potted meat companies. A couple of secondary characters come along: Kimmy Gibbler, Becky Katsopolis, Wesley Pipes, etc. 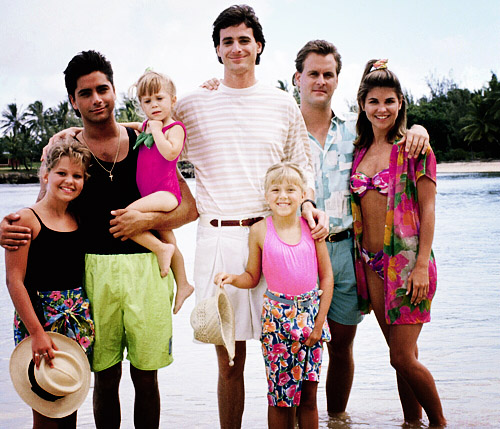 Predictably, wacky shenanigans transpire, somebody learns a lesson, and nobody ever gets AIDS, despite three dudes living in a house in San Francisco during the 80’s. I mean, they didn’t even have a very special episode to mention AIDS. Different Strokes had the balls to tackle pedophilia. Shit, even Carl Winslow fought racism. But I suppose I’m a fool for expecting a sitcom distilled from generic honky tropes to tackle the AIDS epidemic. I mean, couldn’t Gibbler leave a hypodermic needle lying around for Michelle to stumble upon? Is that too much to ask? Couldn’t Uncle Jesse and The Rippers do a tribute concert at the Smash Club for their drummer who is bitterly wasting away because he stupidly thought, condoms are for fags, man.

How come nobody has contacted me to write a sitcom yet? I’ve got eight episodes of Lazy Predator already written. Predator comes to earth and decides to take a mental health holiday because fucking with the space/time continuum and intergalactic warfare are just, like, really harshing his mellow. He subleases a studio apartment in the French Quarter and befriends his wacky neighbor, played by ex-New Orleans Saint, Archie Manning, who is currently going through a messy divorce. They sit around all day getting drunk and playing Connect Four. Also, it’s set in an alternate universe where Russia won the cold war and Lorenzo Lamas is fourteen feet tall and only eats metal. Mr. Les Moonves you can find me on twitter.

So as we all know, Full House ended in 1995, but white people continue to rage on. We have Taylor Swift, Modern Family, and a food dish called a slider. I’m not sure what it is, but I know only us white people eat it. Below are the most common sentences used with the word ‘slider:’

I did so much Pilates today, gonna treat myself to some sliders!

It’s my turn to bring the snacks to my book club, gonna make sliders from my grandma’s old slider recipe!

“Hey gang, lets all go eat sliders and then vote for Mitt Romney!

So anyway, yeah, Full House is technically dead, but what if it wasn’t?! What if it didn’t have to die? What if we had some directly related content to keep our melanin at bay! I’ve listed my ideas for Full House spinoffs below. Enjoy! 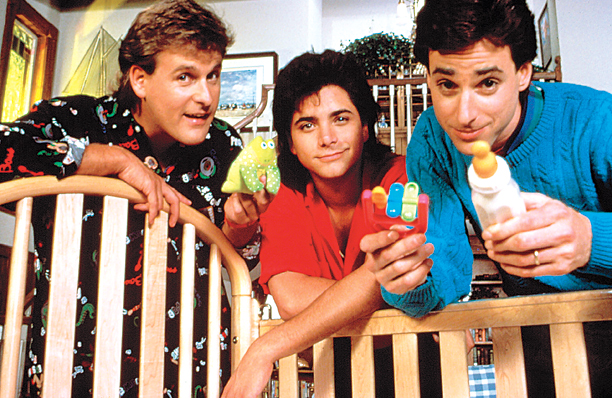 Clone Alone: The entire family decides to take a vacation to Disney World, but because of a busy morning, they forget to bring Michelle, who has the house all to herself and accidentally wanders into Uncle Joey’s cloning device. Needless to say, one girl walks in, two girls walk out. One is polite and sweet, and the other has a goatee, drinks micro brews, and hates Asians. They do their best to get along with one another until the family can make it back, which they won’t because they all died in a fiery plane crash. These mismatched little ladies don’t know that though, so the whole show is like Waiting for Godot meets Double Impact. It gets really dark in season three when one of them joins the Infowars.

Gibbles and Tits: Kimmy Gibbler and an augmented Stephanie Tanner try to open a dog grooming business in northern Alabama. Kimmy’s dyslexia plays a role in their sign accidentally reading, Let us Groom Your God! Before the girls can explain the mix up, their place is firebombed and they are being hunted like dogs (pun intended) by corrupt sheriffs and evangelical hillbillies. They have no choice but to adapt to survive. Karate is learned, rudimentary weapons are brandished, and these city gals are going to fight their way out of Appalachia, one roundhouse kick at a time.

Dave Coulier’s House of Laughs: It’s gonna be the cruelest social experiment since slavery. It’s a reality show where we get some network bigwigs to go to Coulier and convince him his brand of humor is top-notch and severely missed. They give him his own weekly show. He comes out and does a monologue (mostly knock knock jokes and Popeye impressions) while the audience roars with sarcastic laughter. Then, after commercial break, he switches into his Ranger Joe costume and does some ventriloquy work with that chipmunk puppet, and to end out the show, he has a contemporary comic (who is also in on the joke) perform standup, and after, Coulier gives them advice. Can you imagine him telling Louis C.K that he needs a catchphrase or telling Bill Burr he should think about using props, and those guys just eating it up with a straight face and agreeing?

Meanwhile, we surround Coulier with personal assistants that keep him insulated from any outside contact that may compromise the experiment. We wait until his ego has reached maximum capacity (he starts talking down to waiters Where are my fucking sliders!? cutting people off in traffic, etc.) and then we pull back the curtain in a season finale where Alanis Morissette exposes the entire charade to get her sweet, sweet revenge. As we eagerly watch him crumble into madness, we do so with a horrific satisfaction so palpable that it makes us all question our humanity. We are forced to wonder if the joke was on us the whole time. Someone in congress even proposes a bill to just give up and let the Indians have their country back.

Overall, Full House may not have been clever, insightful, or funny; however, it does maintain some endearing qualities. I am reminded of the boy I was while watching that show, the boy who thought life was fair, I would live forever with Jesus, and I could grow up to be anything I wanted. I watch every rerun with both a tinge of sadness and a splash of warmth. It’s a funny feeling. I suspect it’s how my dad feels watching Bonanza or how a crippled, old cat feels watching a bird.