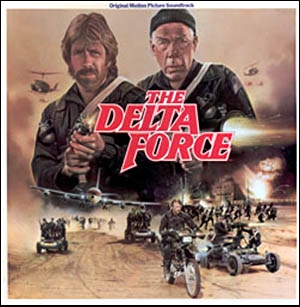 They don’t negotiate with terrorists… they blow them away! 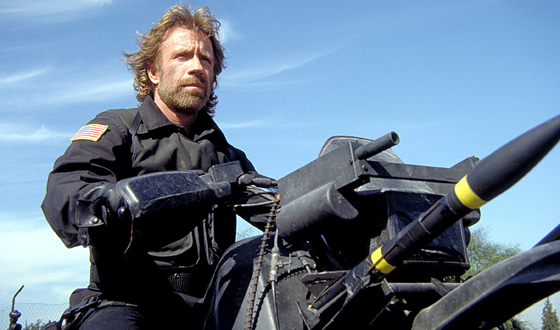 The Delta Force motorcycle is gayness on wheels. It features two penis rockets that must be seen in action to be fully appreciated. Measuring about 14 inches in length, the rockets rest bellow the handlebars on a direct line with the rider’s actual penis. Before being launched they raise to approximately the same angle as an erect penis.The bikes have a second weapon: the tailpipe. You have not seen a gay action movie shot until you’ve seen Chuck look back over his shoulder as he dispatches an enemy with his devastating tailpipe.

Only two people are killed during the films first 100 minutes or so, when Delta Force is still trying to be a thriller. When Chuck and company are finally turned loose, they try their best to make up for lost time piling up about 75 brown corpses, equivalent to 45 normal ones. 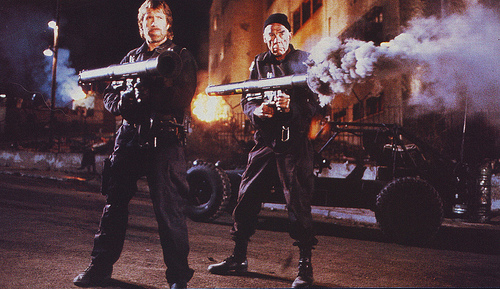 Well… relatively speaking, not all that bad. Several critics, even Ebert, gave the film positive reviews, which is absurd, but maybe they were just glad that it isn’t Rambo. The film attempts to lay an emotional and political foundation for the violence by humanizing the terrorists and their hostages, conveying some of the terrorist grievances and so forth, though this only sweetens their inevitable slaughter.  Additionally, there is enough of a narrative structure for the film to boarder on coherence.

It’s also worth noting that the cast features several well known actors who people under sixty years of age will recognize by name only. During the opening credits I saw “Joey Bishop,” “Shelly Winters,” “George Kennedy” and several others familiar names. I have no idea, however, if these people are actually in the movie. Robert Forester was there for sure though as, of course, was the ghost of Lee Marvin.

Chuck shoots a terrorist who had been hiding under a bed and says, “Sleep tight, sucker.”

The holocaust is reenacted on the plane as the terrorist separate the Jews. There’s a speech about how there are only two terrorists but nobody is standing up to them, a German stewardess must decide whether to cooperate, a Catholic priest attempts to make up for the church’s neglect of the Holocaust Part I… two of the plane’s passengers are even survivors.

A lack of novelty deaths is the film’s major shortcoming. It’s some consolation to see Chuck jump his motorcycle through a window, into a house and punch someone out before landing.

The US never shelled Lebanon. Even terrorists can’t say no to cute little girls.