The Man With The Golden Gun: Bond Brief 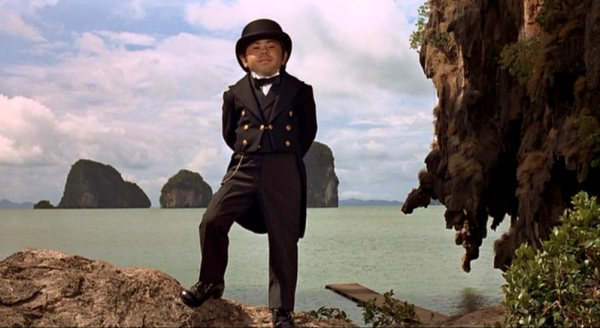 A woman towels off a threenippled man in a precipitously walled hollow of a cove. An assassin lies in wait in the mansion’s entomology room. The villain plays a dangerous game. The phallic nature of the barrel is heavily accentuated. Bond’s son was a surfer but he was taken by the sea. The bullet that killed another agent is melted down and made into jewelry which Bond will later swallow. In a casino in Macau, people gamble on other people gambling. An ocean liner sank in a busy harbor and has never been cleared out. It remains there, half of its body sticking out of the water, corroding amid passing ships.

Bond fights a thousand kung fu masters. A crass American gets pickpocketed by a baby elephant. He cramps Bond’s style. Bond was born with a congenital heart defect that makes him feel too much. The effectiveness of the pills he takes to ameliorate the situation is wearing off. By suffering the effects of Bond’s power the thugs authorize its legitimacy. A car chase accidentally turns into a tedious road trip.

Despite several questionable encounters, Bond maintains the integrity of his person. He girds his loins. He hangs by a thread the whole time. Bond is billeted at Buckingham Palace. He is a master of the invisible gesture. Bond as beguiling, immobilizing hero, a reenactor of prior violence. The villain is lonely and would like to talk to Bond, would like to discuss the intricacies of their lonely profession. He mocks Bond’s pension. Bond drowns a midget and gibbets his body.