HOUSE OF SAND AND FOG 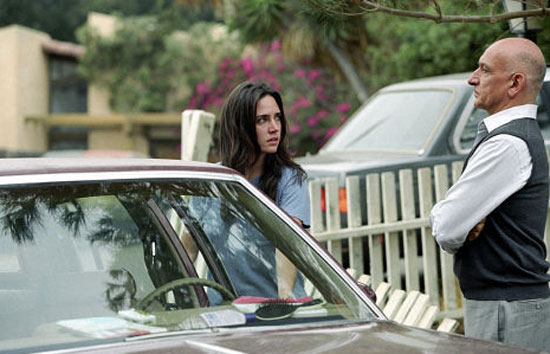 We named the Ruthie“The Kingsley”for a reason. While his performance in the unbelievably Ruthless Sexy Beast might be untopable (as was Ian McShane’s), here in House of Sand And Fog Ben gives it his best shot (as is McShane doing in Deadwood).
I was really mesmerized by not only his performance, but the rest of
the casts’ as well, along with the movie as a whole. Fascinating,
brutal, moving, surprising–human. I feel that House of Sand and Fog treads deeply into the territory of formalism. The exact formalism
that the great Werner Herzog detests so very much. Only here, in this
quite excellent film, a beautiful, but sad, story is spun out of this
crushing, oppressive formalism. As Herzog says;

“I detest formality. I find all of those formal people to be
very base and vile. I would much rather eat potato chips on
the sidewalk than eat in a formal restaurant.”

Allow me to explain.

House of Sand and Fog opens in a well appointed villa on
the Caspian Sea. Colonel Behrani (Kingsley) has just had some massive
pine trees felled so that from his balcony he has an unobstructed view
of the water. His wife and young son play below him in the surf. Then
of course the awful Ayatollahs come to power and any Iranian who had
anything to do with the Shah flees the country as fast as they can.
Fast-forward a decade. The Colonel is toasting the bride and groom at
his daughter’s wedding. The banquet is opulent. Obviously, he is a man
of some, if not great, means. The next scene shows the Colonel patching
potholes along PCH. He works on the road crew. At night, he works at a
gas station, all the while saving every nickel so that he and his
family might purchase a house one day. He even goes so far as to claim
that he works for Boeing and he changes on the way home from work so
that his now teenaged son only ever sees his father in a fancy suit. He
may have left the life of affluence–however rigid it may have
been–but the Colonel has not forgotten his former station in life. Not
by a long shot. Moreover, he works very hard so that his family does
not forget, either. It is a world, the film posits, that is not only
foreign to me, but to most Americans (I feel).

The other side of the story is quite familiar to me (and you).
Kathy (Jennifer Connelly) is woken up at 6:00 am by her mother. Kathy
lies about the fact that her husband has left her, seemingly just to
get dear old mom off the phone. A moment later there is a knock on the
door and she is being evicted. Seems the county leveled a mistaken $500
business tax against her and (probably because of her disintegrated
marriage/substance abuse problems–or maybe from shear laziness) she
has not dealt with it for months. She is told to vacate the premises
and that her home (that her deceased father left to her) will be
auctioned off the very next day. A kindly deputy sheriff (Ron Elard)
calls in a favor to some movers he knows and helps her pack up her
belongings. Obviously, Kathy is extremely upset. She has no money, has
just disgraced her family and has a great deal of resentment towards
the county for their snafu. After a series of bad encounters with
motels, she hooks bad up with the helpful sheriff–named Lester–and
after some wine he tells her that for the past seven years he hasn’t
had the urge to do more to his wife than “hug her or peck her on the
cheek.” Quickly, Kathy and Lester fuck.

I’m getting a bit ahead of myself. Obviously, from what I have
written, the Colonel buys the house well below market value, moves his
family in and plans to sell the house for four times what he bought it
for. Legally it turns out he is in the right. And here is where the
film gets really interesting. In the two main characters, Kathy and the
Colonel, who in the interest of gross over-simplicity, have essentially
been evicted from not only their homes, but their lives by a
faceless government entity. It can be argued from all sorts of angles
who was wronged the worst; who gave up the most, who suffered the
hardest hardship, who is most deserving of the eviction–the
(sometimes) recovering junkie or the ex-military man who helped prop up
one the centuries’s most corrupt regimes. And you can argue this until
the cows come home. My point is, Kathy and the Colonel are in the exact same boat, and they both desperately want their grievances redressed, at the expense of the other. 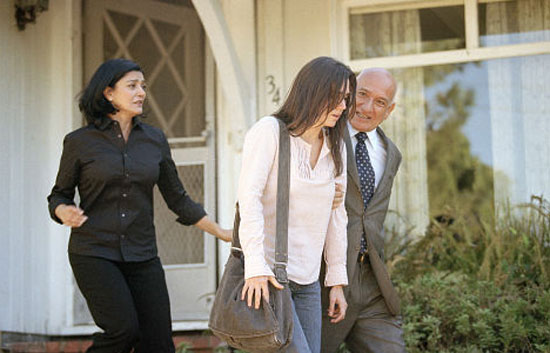 Kathy, despite the protests of everyone she enlists to help her,
spends a great deal of time returning to the house and trying to reason
with Colonel Behrani. Being in that same boat, he has no interest in
her side of things whatsoever. He’s been there. In fact, he’s
been there for ten years. Kathy becomes so desperate that she goes
along with a plan of sheriff Lester’s, who we learn has some pretty
fascistic tendencies (early he tells her, over a romantic dinner, that
he once planted “two 8-balls” on a wife-beater to get the man off the
street), to go to the house and threaten Colonel Behreni with
deportation if he doesn’t sell the house back to Kathy at the price he
bought it for. This goes nowhere, for Behrani, along with his family,
have become American citizens.

In one particularly noteworthy scene, the Colonel is
explaining to his son Esmail (Jonathan Ahdout) that they (the Behranis)
have nothing to worry about since they are in fact Americans. Esmail
expresses a tinge of sympathy for Kathy but the Colonel quickly
corrects him, explaining that Americans do not deserve what they have.
Then he tells Esmail that they are better than Americans, for Americans
have the “eyes of children,” and are always looking for the next
distraction. And of course the irony is that he is now in fact
American, no matter how he feels about it. In another great scene, that
I will go so far as to call fantastic, Kathy is speaking to Mrs.
Behrani (after her cop boyfriend threatened the family) but her English
is no good and she feels Kathy is saying that the family will in fact
be deported. Mrs. Behrani begins to wail, “No! No! They will execute
our children.” Like a sledgehammer drops the realization upon Kathy’s
head of what in fact these people have had to endure. How unlike
her–for she will probably inherit another house when her mother or
uncle or whomever dies–the Behranis truly have nothing but the house. 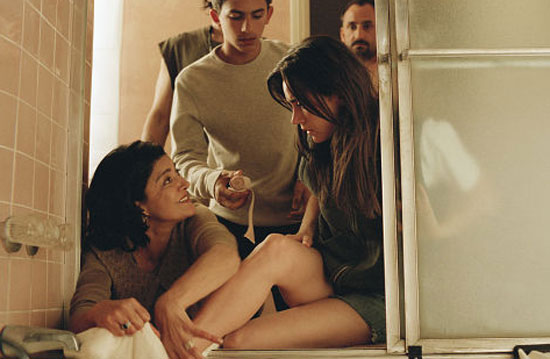 Things begin to unwind even more for Kathy when Lester starts
feeling twinges of guilt about abandoning his family. She is too
ashamed to turn to her mother for help (apparently Kathy has no
friends) and her brother is too consumed by work to even talk to her
for more than thirty seconds. So, she downs about six mini-bottles of
Jack Daniels, drives over to her former house and sticks Lester’s gun
in her mouth. In a scene that I can only describe as overwhelming
humanity, a cinematic moment where all the bullshit that the characters
tell themselves (formalism) to sustain themselves on a day-to-day basis
simply fade into nothing, Behrani gets the gun away from her, realizes
what he has been doing to Kathy (in his quest for formality), and brings her into his/her (thier) home.

As any regular Ruthless Reader knows, we have no problem
with giving away the ending. “Fuck you and your ‘spoilers'” is one of
our many mottos. Hell, I’ve personally began several reviews by giving away the climax. Most movies suck, so who cares? Not House of Sand and Fog.
Trust me, though, the ending is superb and will leave you, well, just
see it. I will tell you this much, Ben Kingsley, as I said, once again
proves why he is one of the greats and why we name awards after him.
And though she cries for maybe half of the film, I found myself very
drawn in to Connelly’s Kathy. Why she doesn’t get more work is a
mystery, especially in light of how dreadful 90% of good
looking American actresses are. More remarkable then anything is that
the director, Vadim Perelman, is a first timer who not only hails from
the Ukraine, but is a college dropout, too. He also adapted the
screenplay. I for one expect huge things from this guy. So, do yourself
a favor; instead of spending $35 to take your squeeze out to see Spider-Man 2, spend $20 on a six-pack, some pizza and rent House of Sand and Fog.