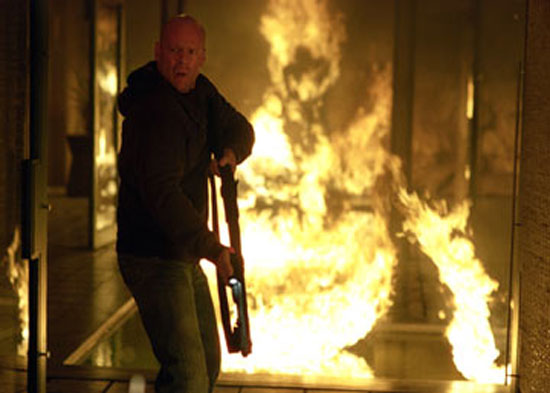 The beginning of Hostage, aside from the most
over-rendered and unnecessary opening credits in the history of film,
shows great potential. Bruce Willis stars as Jeff Talley, an LAPD SWAT
hostage negotiator. There’s some nut job holed up in a house with a
girlfriend and the girl’s kid. SWAT snipers can take the guy down, but
Willis, who is “the guy,” says that no one dies today. And of course
knowing what we know about Hollywood, lots of fucking people are going
to die as a result of his statement. Boom, boom, boom–Willis breaks
into the house to find the guy and the girlfriend dead and the kid shot
and bleeding to death. The blood looked really good, and dead
eight-year-old boys make me happy because I’m a card-carrying member of
the culture of death. Actually, they make me happy cinematically
because as a result of his massive failure, Willis leaves Los Angeles
and moves to a fictional town in Ventura County. It is believable to me
that having a child die in your arms as a result of your fuck up would
cause a man to alter his life that drastically. Even a long-time SWAT
veteran. The story picks back up in said make believe town (I’m from
Ventura County and there is no Bristo Camino. There is however a
Bristol Farms near Camarillo…) where Willis and his
family-on-the-rocks are trying to get by. His daughter is teenaged and
therefore difficult (I should mention that Rumor Willis, who plays his
daughter and is he and Demi Moore’s real life daughter, is the ugliest
female teenager in at least twenty-years of cinema. At least both her
parents know great plastic surgeons). Talley and his wife are probably
getting divorced. He is the chief of police and even though it is
brief, we can see he is unfulfilled in his new role and misses the
hustle and bustle and blood of Los Angeles .

Enter super rich Walter Smith (Kevin Pollak). He has two
children and lives in a veritable compound up in the hills overlooking
the town. Fuck it; the place is a fortress. Not only does it have a
panic room, but you hit one button and all these floodlights come on
and metal grates drop in over the windows, etc. Three local fuck ups
ranging in age from eighteenish to about twenty-three decide to follow
Smith and family home to jack his Escalade. They break in and capture
the family, but before they can, Tommy (Jimmy Bennett), Smith’s young
son, pushes a silent alarm. This causes one of Willis’s deputies to go
and check out the house. In a very violent slow-mo death sequence, Mars
(Ben Foster), the psycho killer of the bunch, shoots her twice.
Actually, she doesn’t exactly die. Rather, oozing blood, she manages to
claw her way down the driveway so she can die in Willis’s truck. Dennis
(Jonathan Tucker), the would be ringleader of the impromptu gang, is
shocked by Mars’s actions, but he decides to roll with it because,
well, the script calls for him to do so. His enthusiasm for the killing
and subsequent hostage situation is bolstered when they find four
million dollars in cash. Willis calls to negotiate and Dennis
demands a helicopter. Willis says he can’t do that, he’s not “the man,”
and turns the whole clusterfuck over to the county sheriff. He will not
be a party to another massacre. Willis then goes to a coffee shop where
he phones his wife, they make an attempt to patch things up (she’s been
watching him on TV for hours) and he tells her that as soon as he is
done paying a call to the fallen deputy’s house (“she has a kid”) he’ll
be home for dinner and to get their life back on track. But wouldn’t
you know… 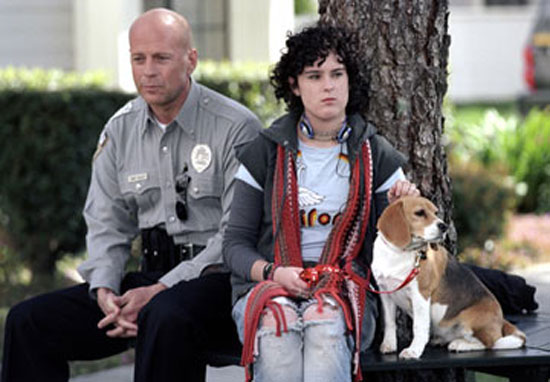 As Willis gets into his truck, a man shoves a gun into his back
and tells him to drive. They reach a dark alley where a van backs up to
his truck. In perhaps the best scene of the film, a masked mafia ninja
(I know) coolly and calmly instructs Willis to put his hands through
the steering wheel so he can cuff him. Then he puts Willis’s seatbelt
on and explains that the man in the back seat is going to reach around
and hold him. Then the back of the van opens up and voila;
there is Willis’s wife and ugly daughter, bound and gagged. Willis goes
absolutely ape shit but he is immobilized by the man behind him. The
director even includes a nice shot of Willis’s feet lamely kicking at
the truck’s pedals. But all is for not. They’ve got him. It turns out
that Smith is not only in the witness protection program (sign me up;
seriously, you have to see this house) but he still does favors for the
mob. Basically, he sets up offshore accounts and tax dodges. There is a
DVD in the house that the mob simply must have. Willis is to retrieve
it and then his family will be released. In other words, the plot
seriously thickens.

As I mentioned, Mars is a serial killer who gets of on
watching people die. So, and bare with me, you’ve got a hostage
situation in a fortified compound, SWAT teams, the mafia (who like
dressing up as ninjas; who doesn’t?) and a bloodthirsty killer. All
that’s missing is an alien invasion. Man, Hollywood… For me, the
central problem with Hostage is exactly that; too much is going
on. Pick a fucking genre, you know? Trying to focus on any of the
various antagonists is challenging. And I’m talking about for the
director, not the audience. We just get shortchanged by what could have
been a really fine film. Instead, it is a half-baked mess. That said, I
will admit that director Florent Siri–who has only until this film
directed video games such as Splinter Cell–is extremely
talented in terms of camera manipulation. Also, the movie looked
fantastic. Almost every scene is saturated in strikingly rich colors
and the action sequences had real snap to them. There’s even a great
little homage to Aliens, which, serves no actual purpose
besides showing how truly silly the writer is, but is fun and well shot
nonetheless. Ah, there’s the aliens… Oh, and just to add to the
over-the-topness of it all, it turns out that the FBI and the Mafia are
one and the same. Which is OK, because Mars transforms from a jerk with
a gun into a comic book villain whose weapon of choice is Molotov Cocktails.
He even kills most of the Mafia/FBI guys for Willis. He also kills
Dennis and his lame brother in a particularly gratifying sequence where
they not only die in each other’s arms, but staring into each other’s
eyes. Far-fetched, but nice!

I want to give special mention to Jimmy Bennett. As a
generalization I hate children in films because almost without
exception they are overly-cute, nasty little buggers that lower the
mentality of the film by two standard deviations. Not so in Hostage.
In one particularly Ruthless sequence, Tommy breaks his sister’s bong,
palms a piece of the shattered glass (he wounds himself), uses it to
cut himself free, steals his sisters cell phone and then escapes into
the mansion’s massive series of air vents where he communicates with
Willis. Badass little kid. The sequence where Tommy first gets into the
vents is almost whimsical and for some reason and I very much enjoyed
watching him scamper from room to room. Movement, as opposed to
psychological depth, seems to be Siri’s forte, and that’s fine.
However, the real problem with Hostage is that on account of it
trying to be all things to all genres, we are forced to watch a
thirty-minute climax where crooked FBI dudes, a Trent Reznor looking
gothic serial killer and mafia ninjas all get wasted. Way too Poochie
for its own good. Lurking beneath all that to the extreme! bluster is yet another solid performance from Willis, as well as a better than average supporting group of actors. I liked Hostage, I just wish I had been allowed to like it more.