Sam Peckinpahs Straw Dogs might have said it first (and best), but Alexandre Ajas The Hills Have Eyes is equally audacious in its suggestion that the only worthwhile expression of masculinity is through unrepentant violence in defense of hearth and home. And whether Aja intends his remake as a straightforward defense of the engorged phallus or a satirical attack on the very American ideal of mindless vengeance, it retains the edge of where we are now so clearly that it doesnt seem to matter. Our ironic age would lead me to believe that the film seeks to rub our collective noses in the filth of our anti-intellectualism and trigger-happy manner, but its much more fun as the opposite; and so Im going to naively assume that Aja has sent into theaters the ultimate recruitment poster for the hard right side of the aisle. Despite conservatisms ascendancy that has all but captured the culture in full, it is a deeply and inherently insecure philosophy, and as such cannot rest even if most of us long ago fell into line. Furthermore, there are still limp-wristed book readers about, and until they strap on a sidearm, procreate like a fevered Mormon, and eat their corn-fed steak blood rare, there is always the risk that a liberal backlash will erase hard-fought gains. 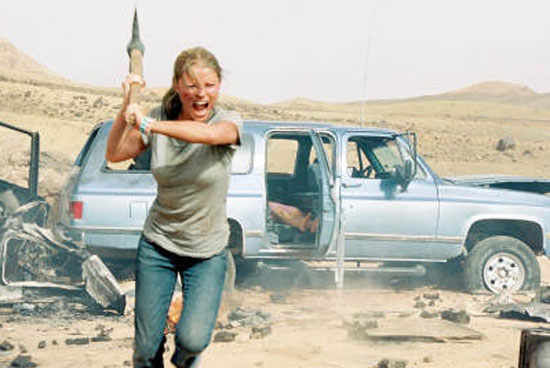 The films opening montage of nuclear blasts and deformed children suggests that what is to follow is an indictment of those tests decades ago, but Id rather embrace the idea that they are thunderous chords of triumph; ejaculatory releases of white male power that ended a war, subdued the mightiest beast in Asia, and kept atheistic barbarians at the gates ever after. White men are very, very good at killing people, but in their defense, its always for the most laudatory of purposes. Honor, courage, flag, and the innocence of childhood — these alone motivate the white cock of supremacy, and such urges are fed by the blood and bone of inferior agents around the globe. These tests produced the mutants of the film, but let me also suggest that these victims are not tragic figures, but lone holdouts to progress. After all, they refused to leave the area despite numerous warnings, and instead foolishly retreated to their mines. Generation after generation produced hideous, deformed creatures that had to suck blood and gnaw flesh to survive, but should they not live with the consequences of their defiance? And these loathsome beasts could be the other of your choice: liberals, Communists, Jews, atheists, or simply those who oppose the push of the American Way. They have been alienated and isolated, yes, but still lurk in the shadows, always ready to pounce on unsuspecting families who only wish to celebrate their virtue.

Doug Bukowski (Aaron Stanford) is the lone enemy who is not a member of the mutant race in New Mexicos desert, and he exists solely to undergo a transformation; a regeneration through violence that will take him from a passive, glasses-wearing, anti-gun man of the mind to an axe-wielding cocksman who is beaten, stabbed, shot, whipped, and bloodied, but stands his ground long enough to rescue his baby daughter. Ridiculed in the beginning as a fool and a pussy by his father-in-law Bob Carter (Ted Levine), he avenges that mans horrific death with a murder spree so liberating that the old man could be heard masturbating from the grave. Doug owns a cell phone business and refuses to touch a gun, so he is the target from the outset. And who hasnt heard numerous pundits and commentators blast our feminization; whereby a nation of explorers, hunters, and warriors surrendered their genitals to effete, nurturing milquetoasts who felt your pain but werent willing to take up arms to make it right? The idea is further demonstrated in the immediate transition from the Clinton years to the Age of Bush. Diplomacy, cooperation, and treaties — all disregarded as guarded and feminine by the White Male Cock on the right — yielded to cowboy ethics; war, big profits, and a revenge so twisted and bloated that it couldnt even be counted on to select the proper target. Still, such details are for the bean counters and the Nancy-boys. Mainstream America — the Average Joe, the hard-working family man who is the very backbone of our greatness — is always hungry for a fight, and what could once be dismissed as pre-emption is now simple preparedness and just plain ol good sense. Whats more, its being a man. 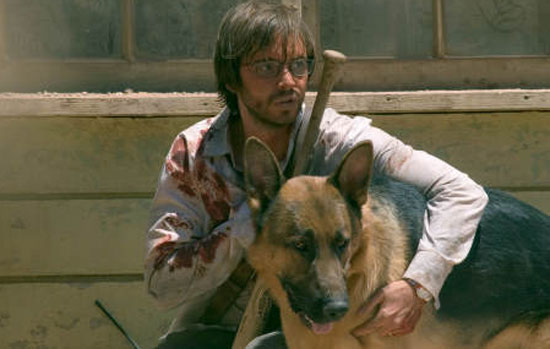 So yes, Doug becomes everything he should be, and for good measure, he dispatches one of his victims by literally slamming an American flag through his throat. It is a moment ripe for humor, but again, as a straight moment is says much more about U.S. domination than a hundred dissertations ever could. And while the father-in-law (an SUV-driving ex-cop, as if he could be anything else) is barbecued for the perverse delight of the mutants, his death helps spur the surviving men to fight. No way Islam has a strangle hold on martyrdom. Young Bobby (Dan Byrd) is already a bit rough around the edges, but he too needs a little extra encouragement to become the warrior he needs to be. And while neither man can save the mother, father, and young wife (Dougs spouse is blown away before he comes into his own), they use these occasions to find the most important asset in the overall war: youth. Needless to say, I was ready to declare this film the best since The Godfather had the script found the courage to murder the baby, but its survival is much more important to the resolution of the film. Had it died, Doug would have been a complete failure, and the phallus would have gone flaccid, perhaps forever. And no one is about to declare the end of patriarchy quite yet. First, Doug must hunt down the devil bastards who committed these foul deeds, a journey that rightfully takes him to a mock-village that once acted as a nuclear test site. The mutants have taken over these odes to 50s domesticity (even leaving around the grinning dummies that escaped obliteration) and having defiled the family life on display, Doug comes upon the scene to set things right once again.

An additional spur to vengeance is the brutal rape of young Brenda (Emile de Raven), who is (again, by necessity) sweet, hot, and blond, which makes her violation that much more offensive. Brenda might be tainted, but her symbol as shining white womanhood will save her from being cast out. After all, the other object of sexuality, Lynne (Vinessa Shaw) was shot in the head and dumped in the SUV, largely because she was truly tarnished after being married to (and deflowered by) the emasculated, pre-murderous Doug. It might have been more effective to have her death occur after she was able to witness Dougs transformation, but in that case, her death would have been meaningless and a sign that perhaps, he had not fully embraced his new identity. For if Doug had grown a pair and still lost his wife, no meaningful message could have been extracted. The chain of death would have been random, rather than a systematic, predictable pattern that follows from ones commitment to an idealized America.

And what about the violence? Interestingly, it is both cathartic and orgasmic, in that masculinity is restored to its proper place of honor, and the audience is allowed to cheer for the sheer enjoyment of it all. Axes meet eye sockets, flesh burns with crisp efficiency, chests are blown away by buckshot, heads fly through the air leaving gurgling torsos, birds are bitten in half, and grotesque invalids are torn apart by yet another symbol of all-American-ness: the family dog. Blood soaks the New Mexico sands, and crumpled, broken bodies litter the desert floor. We watch wild-eyed freaks consume human organs, giant-like lummoxes push through rooms of decaying, dried flesh on hooks, and even our hero escape a container filled with severed arms, legs, and the occasional chest cavity. Again, these brutalities might be accompanied by a firm tongue-in-cheek, but if so, the director is in possession of a level of restraint unseen in many a year. Its so relentless in its push to be authentic and serious that even the blast of righteous music on the soundtrack at a key moment for our hero doesnt feel like parody. Youre meant to idolize this one mans fury. And so we do. Doug is the new American man; not so new, really, as reinvented. Hes the product of our past as much as the mutants who feed from radiation-tainted soil, and hes where weve been heading for quite some time. And now weve arrived, just as Bob would have wanted.