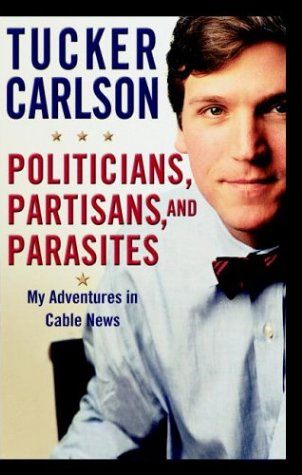 Okay, I’ll admit it. Unlike the rabid, witless Ann Coulter, Tucker Carlson is not
a cunt. Hell, after reading his book, I wouldn’t even say he’s an
asshole. Smarmy? Sure. Annoyingly boyish and unable to carry George
Will’s jock, let alone his bow tie? Of course. Still, and much to my
surprise, Carlson is not at all intolerable in his book Politicians, Partisans, and Parasites, and one (notice the lack of “I” here) might even say he has a certain charm. I might not agree with Mr. Carlson when it comes to policy, political philosophy, or choice of
haircut, but I cannot dismiss his book as yet another right-wing swipe at everything to the left of Mussolini. Largely anecdotal and informal, Carlson’s book is more about the
inherent humor and silliness of politics, rather than a trumped up
screed of self-righteous blather. True, Carlson cannot finish his book
without at least a few jabs at Bill Clinton (he wouldn’t be a
self-respecting conservative otherwise), but I found the overall tone
refreshing, which, considering my expectations, simply means that at no
time did I have to retrieve the book from the fireplace because I had a
review to complete. Clocking in at under 200 pages, I was able to
finish it in one sitting, which is as it should be for a book of this
nature. Give Carlson this: he doesn’t insist on hanging around longer
than he’s needed. He checks in, rips a few gutless wonks, cracks wise
about his rise to fame, and leaves before he gets stale. For that, I am
thankful.

Part of the book chronicles Carlson’s introduction to cable television, a CNN gig called The Spin Room that he shared with Bill Press. The show was on far too late in the day
for anyone to care, and the powers-that-be so cheap that they wouldn’t
even buy the pair coffee mugs. The only guests they could secure were
assorted nut jobs and those who lived for exposure, so the show was
largely dismissed, even being called “the worst show in the history of
CNN” by a Salon.com television critic. Predictably, the show was axed, and Carlson eventually settled into the more high profile Crossfire,
where he remains today. Carlson gives his TV beginnings a genuine
flavor by insisting on “personality” rather than politics. At first, I
thought he was being too nice. For the first two-dozen pages, the worst
thing he said about anybody was that Bill Press was a “natural
exhibitionist” because he liked to inhale burgers and fries on the air.
By page 43, I saw what Carlson was up to. He has a genuine affection
for weirdos and buffoons, reserving harsh criticism only for
“partisans,” those he defines as humorless drones taking orders from
assorted committees. Carlson even likes ideologues because at the very
least, they are not concerned about looking silly or appearing
outrageous in front of the camera. At least they have the courage of
their convictions. With partisans, Carlson feels, inflexibility has
nothing to do with a set of ideals, but rather the game of politics
itself — striving for, achieving, and holding on to power.

Carlson best describes what he means with the contrast between
Jesse Jackson and Al Sharpton. Both are clowns in his book, but at
least Sharpton has a sense of humor and genuine command of the issues.
Carlson describes Jackson as an opportunistic, largely ignorant,
self-serving con artist more concerned with his own image than pushing
the merits of a particular cause. More than that, he is rarely prepared
for a debate and relies heavily (far too heavily for someone with a
reputation of being articulate and wise) on note cards and the research
of others. Carlson even has some sassy words for Bill O’Reilly, calling
him a pompous braggart and someone who talks about himself “too goddamn
much.” He even dismisses Jerry Falwell
as a “publicity hound,” someone more concerned with appearing on
television than any particular issue. In this regard, Carlson is not
being mean, rather he is revealing what he likes about the people who
come on his show. He’d rather spend a few minutes with an entertaining
bullshit artist than a self-righteous SOB who is too blinded by the
trappings of power. So in Carlson’s world, the best you can do is to
stir up the animals. Take South Carolina Senator Ernest Hollings, by
anyone’s standard a certified madman. Hollings is mean spirited,
juvenile, and insensitive, having referred to Africans as cannibals,
other Senators as drunks, and responding to the Japanese premier’s
belief that American workers are “illiterate and lazy” with the
statement: “You should draw a mushroom cloud and put underneath it,
‘Made in America by lazy and illiterate Americans and tested in
Japan.'” Carlson fills the book with amusing anecdotes such as this
because at bottom, he thinks it is better to laugh at the Great American Circus
than brood in shame. Why else would Carlson say of toupee-wearing (and
now imprisoned) Congressman Jim Traficant, “There’s no politician I
miss more?”

Carlson also throws in a few words about animal rights
activists, anti-capitalists, and liberals in general. Nothing he has to
say is necessarily kind, but neither is he foaming at the mouth with
rage and disgust. Whereas Coulter wants to conduct Stalinist show trials and hang all traitors in the public square, Carlson would rather mock — gently and without any real malice. He has his beliefs, but it doesn’t appear he’d put his life on the line for
any of them. Most importantly, he wouldn’t kill for any of them
either. Carlson even discusses the attempted assassination of Theodore
Roosevelt during his 1912 Presidential campaign. Recalling that TR
continued his speech despite having a bullet in his chest, Carslon
states the following:

“Theatrical? Sure. A pointless display of swaggering
machismo? Absolutely. And for that reason, marvelous. Politicians don’t
act this way anymore, partly because physical courage is no longer a
requirement for office, but also because it would be politically
suicidal. A contemporary politician would destroy his political career
by doing what Roosevelt did. His disregard for his own safety would be
held against him, taken as evidence of recklessness, possibly of mental
instability.”

This brief aside best sums up Carlson’s guiding philosophy, be it
politics, television news, or life itself — “Be tough, be courageous,
and be firm, but by all means be interesting.” We can’t imagine
anyone today acting as TR did because such an act would require
spontaneity, which has been all but banished in our focus-group
obsessed and poll-driven culture. Fine, Carlson isn’t consistent and he
willinngly swallows the phony bravado of George W. Bush and his flight
suit, but it’s a nice sentiment at any rate.

Amidst the politics and Beltway gossip, there are also strange
stories of sex therapists, drunken plane crashes in the desert, and
bizarre accusations of sexual assault. Through it all, Carlson always
finds a chuckle to describe his life in the limelight, and what our
obsession with celebrity has done to the most fragile among us. At
bottom, we seem to fear anonymity, and the resulting pain transforms
usually decent people into stalkers, mental patients, and pathological
liars. Therefore, Carlson is merely giving his side of the story, which
doesn’t involve changing the world, pushing an agenda, or
reinvigorating the body politic. I’m sure he’ll save all that for
another book. At that time — and if he maintains his conservative
beliefs — I’ll tear him to shreds as he no doubt deserves. But for
now, I am at a loss. Tucker Carlson wrote a fun book; light, breezy,
and uncomplicated. It is encouraging to know that even among the bastards of the Right, a little bit of humanity can sometimes squeeze through the darkness.