If you were to try and draw a comparison between Stevenson’s
Dr. Jekyl and Mr. Hyde and any football player who ever lived, the most
deserving candidate would be Ray Nitschke, the most beloved, feared and
dominant player in Green Bay’s long and storied history. Your typical
football fan is familiar with Ray’s Hyde persona; He was missing his
four front teeth, he was totally bald, his eyes were blacked – one
season he bled constantly from a cut on the center of his forehead that
caused blood to drip down over his face the entire game, “the blood
would get mixed in with dirt and grass stains and lime… the opposing
quarterback would look across and see Nitschke bleeding under his
face-mask and maybe he’d do a little thinking about the next blood shed
might be his” – and yeah, Ray Nitschke put the hurt on ball carriers as
good as anybody who has ever suited up. What most people don’t know is
that his off field persona was anything but that of a “madman.” He was
a devoted husband and family man, who together with his wife Jackie,
raised their three adopted children on a ten-acre spread in Fox Valley,
just outside of Green Bay.

Much of his autobiography, Mean On Sunday deals with
this seemingly unexplainable duality. On the one hand, he was seen as a
killer, a thug who was on the field only because of his burning desire
to hurt people. On the other, you have a prototypical suburban dad who
cared more for his wife and children than anything else. Just before he
retired, the majority of the state of Wisconsin held a “Ray Nitschke
Day,” in honor of the great middle linebacker. Enough money was raised
through the sale of “We Love Ray” pins and stickers to establish a Ray
Nitschke scholarship fund that allowed needy high school kids the
opportunity to go to college. In true Nitschke fashion, the fund is not
just for athletes, but for any deserving child.

In Mean On Sunday, Ray begins his story with his
childhood in a suburb of Chicago. Both of his parents were dead by the
time he was in high school. Luckily for him and Green Bay fans
everywhere, a combination of two older brothers, extended family and a
football coach named Puplis, allowed Ray to receive a scholarship to
play ball at the University of Illinois. It’s interesting that he
actually was taken as a quarterback, and eventually switched to
fullback before the coaches saw what he really was, a hard hitting
son-of-a-bitch middle backer. At Illinois is where Ray lost his four
front teeth. They were playing Ohio State in 1956 and at the time
facemasks were not mandatory. You could show your toughness by going
without. A guard hit him on a kickoff and the four teeth were gone. Ray
describes it like this, “During a timeout, somebody shoved a wad of
cotton in my mouth and I went on with the game, spitting blood all over
the field.” 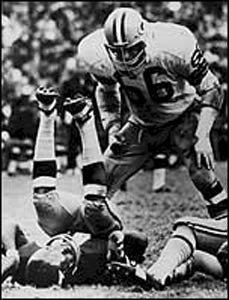 When he was initially drafted by the Packers, Ray was a little
disappointed. He had always dreamed of playing for the Bears, seeing as
how he was from Chicago and had played for Illinois. Like the
soft-spoken, hard working man that he is however, Ray took his $500
signing bonus, (Yeah, $500. Rookies today easily get that figure with a
few more zeros tacked on the end.) spent $300 of it on a used Pontiac,
and drove to Green Bay. By the way, Nitschke took the remaining $200
and gave it to a family whose house he used to have Sunday dinners at
while he attended Illinois. As it turned out of course, Ray’s becoming
a Packer coincided nicely with Vince Lombardi’s arrival at Green Bay,
where the two of them plus a slew of other future Hall of Famers not
only turned Green Bay into a five time Championship team, but into
arguably the most dominant sports dynasty in history. Period.

The parts of the book I enjoyed the most were Ray’s recounting
of Coach Lombardi. Ray’s rookie season, 1958, was the worst in Green
Bay’s history. Lombardi turned all that around in his first year, 1959,
when the Packers posted a winning season for the first time in 11
years. For the decade of sixties, the Green Bay Packers were near
perennial champs right up until Vince retired after the ’67 campaign
and the Packer’s winning their third straight NFL championship and
second consecutive Superbowl. The reverence and awe with which players
speak of Coach Lombardi I found to be very humbling. (Not just Nitschke
– I recently finished Jerry Kramer’s 1967 season diary Instant Replay.
He recounts a great story where Nitschke didn’t want to go against a
rookie player in a practice drill. That is until the rookie called
Nitschke a “sonofabitch.” Ray then knocked the man unconscious with a
single forearm.) In Ray’s estimates, Lombardi was more than human, he
was almost super natural. Ray recounts some of the jokes that players
used to crack about the short Italian guard from Brooklyn.

Or the one about the football player who died and went
to heaven. He noticed a team of angels scrimmaging while a short fellow
stood on the sidelines who yelled at them, so he asked St. Peter:

About the winter night he went to bed and Marie [His wife] said, “God,
your feet are cold,” and he answered, “Around home, dear, you can call
me Vince.”

Again and again, Nitschke explains how he accepted and internalized
Lombardi’s gospel of, “Your religion, your family, and the Green Bay
Packers, but not necessarily in that order.”

Before Nitschke met and married Jackie, he did have a more
Hyde-like off field persona. He claims that he wasn’t a heavy drinker,
but that one or two drinks were enough to set him off. Mean on Sunday
is noticeably short on anecdotes of barroom antics, but from what I
could infer, Ray would beat the crap out of anyone who looked at him
funny. Looking at photos and movies of Nitschke in action, I personally
cannot think of anyone I would rather not get into a “fracas” with.
More than anything else though, this book gives you a sense of just how
much Ray Nitschke loved the game of Football. How football took him
from a miserable and underprivileged childhood and turned him into an
upstanding and beloved man, both on and off the field. The book
contains plenty of good tough guy stuff, like when Ray broke his arm
but stayed in the game only to then break his nose. It also has enough
of his quite conservative worldview to make you a little uneasy. Like
when Broadway Joe Namath and the upstart New York Jets beat Johnny
Unitas and the Baltimore Colts in Superbowl III, “Having any AFL team
win would have been bad enough, but I hated to have it done by Namath?
No question about it, as a player he’s outstanding. But I didn’t feel
he’d used good judgment in the things he did and said off the field.”
To quote Abe Simpson, “Look at those side burns! He looks like a girl.
Johnny Unitas. Now there’s a haircut you could set your watch to.”

Still if you like football, you’ll enjoy Mean On Sunday.
Not only is it a chance to get into the head of in my opinion one of
three best middle linebackers (Butkus and Speilman make up my undecided
top three) to ever play the game, but you get the inside story on a
very transitional period in NFL history. The merging of the NFL and the
pass happy AFL, the start of the wholly American institution that is
the Superbowl and the effect that television had on changing the game –
much to the negative in Nistchke’s opinion. (Now a days defenders are
barely allowed to touch QBs – Nitschke used to knock ’em flat on their
rears.). Not the most intelligent read out there, Mean on Sundays is a fine book written by a great man. Through it the spirit of Nitschke lives on. Go Packers!