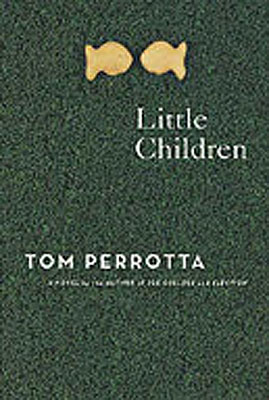 It might take most people a lifetime to figure out, but after reading Tom Perrotta’s latest novel, I have the answer — the number one, and perhaps only reason why marriages fail — the creation and presence of children. Why do men spend dozens of hours per week on porn websites, sending away for used panties in order to sniff them while the wife is away? Kids. Why do men look bored, restless, angst-ridden, depressed, sad, and suicidal? Again, children. Why do men seek any excuse possible to leave the house, a desire that usually leads them into the arms of another woman? Yes yes, the young ones. Further, why do women sigh with unfulfilled longing, or resort to murder, or adultery, or suffer crippling mental breakdowns? Fucking kids. There really is nothing else. You may say money, but that doesn’t really become a factor until the little snots start sucking the bank account dry with their never ending needs and demands. What about the old, “We’re just growing apart” line? Why else do people grow apart than out of never doing anything as a couple and spending all free time with mini-humans who speak only of candy, shit, and what’s in it for them? Perhaps, just perhaps, the divorce rate would fall to near non-existence if couples realized the unending paradise of child-free living. Or you could be like the characters of Little Children; the desperate, the damned, and the slowly, bit by get-the-fucking-toys-out-out-the-center-of-the-room bit, dying.

There are at least six main characters in Perrotta’s novel, all of whom are sexually warped and looking everywhere but their immediate surroundings for gratification. Todd, called the “Prom King” by local housewives, is a stay-at-home father, a seemingly ideal circumstance due to his wife’s career as a documentary filmmaker. I say “seemingly,” of course, because, despite not having to suffer through mind-numbing employment, he is effectively emasculated by the role and actually has to spend time — a lot of time — with his daughter. Todd has promised his wife, Kathy, that he will eventually fulfill his original promise and pass the bar exam, although it is clear that he is in no rush to do so. Todd spends his days at the park, playing midnight football with a group of cops, and conducting an affair with Sarah, a plain, once ultra-feminist woman who now suffers through a dull marriage with a man (Richard) who would rather be with “Slutty Kay,” the object of his internet fantasies. And then we have Larry, a retired cop who once shot and killed a black kid who was only carrying a toy gun, who wanders about with no real purpose (due to a loveless, dull, child-filled marriage), which prompts him to play football with Todd and harass Ronnie, a convicted sexual offender who has recently moved in with his mother after a stint in prison.

The characters intersect in charming, humorous ways, and have their stories told in equal measure, but this largely Todd’s tale. He is unhappy with his wife, but it is impossible to discover the reason why. This is not the fault of the author, however, but a striking commentary about the very essence of dissatisfaction, specifically the marital kind. We construct elaborate rationalizations for why we cheat, but at bottom, we really don’t have a clue. In Todd’s case, his wife is more attractive than his lover, and nothing Sarah says is particularly interesting (while Kathy is a filmmaker, for chrissakes). They meet at the pool during the day, chat about trivial bullshit, then put their respective kids down for naps while they hit the sheets. It’s all so, well, boring, because it’s been done. Perrotta’s skill here is his analysis of the banal, rather than pushing it forth as breaking news. The affair is clichéd, silly, and doomed from the start (and we know the talk of “starting over” is just talk that cannot possibly be pursued), but that is the nature of infidelity. I would imagine that 99% of all those who stray from marriage do so as if following a shopworn script. The first meeting is chance, yet flirtatious; the follow-up visits involve talking around what they are getting into; the first sexual encounter is hot and animalistic, usually following a rainstorm and quick rush inside; and the rest is a series of surreptitious phone calls, e-mails, and faraway glances. But as the writing is fresh and full of bite, Little Children peels away the covers of our lives and yes, we’re as boring and predictable as we’ve always suspected.

As with any tale of suburban drudgery, there is the right-wing cunt, a sanctimonious born-again Christian named Mary Ann, who, in a neighborhood book club, gives her reasons for hating Madame Bovary, which are exactly what you would expect them to be. There is Ronnie’s humiliating blind date, an evening of witless banter with a nutcase, ending, appropriately enough, with him masturbating while parked in front of an elementary school and wiping the jizz on his date’s seat. We also meet Ronnie’s mother, a mere corpse of a woman who drives her son nuts when she’s not pushing him to the brink of insanity. With each person, we get a bit of the past; just enough to explain how they got where they are. In many ways, these people are horribly ordinary, which makes for a more realistic examination of contemporary ennui. Some might call Perrotta’s book an attack of the ‘burbs, but that would be too easy. There is little doubt, then, that the story would be the same in some other neighborhood, allowing for a change of a few words here and there, perhaps. After all, it’s not a white, middle-class thing to be clumsy, selfish, and distracted, although at times we do seem to do a better job of it.

In the end, there are no shattering events, nor is the package secured with a pretty bow. Things just change, shift — as if the fire of that which was sought to bring about a perceived need had no real reason to sustain its heat. Having affairs is what we do, and we’ll do them until we find something else to do. Then we’ll have another. Our imaginations won’t allow us to go any further than that. And still, there are the children. This story would be impossible without the little buggers, and although there are no capital letters revealing Perrotta’s hand, it is all too apparent that there is no joy in Childville. At one time these people hungered for knowledge, for books, for a glimpse of a world that fostered idealism, activism, and change. They have moved on, of course, “grown up,” only to become little children once again. For it is not the decision to remain childfree that is a sign of immaturity, it is the reckless decisions and blind choices that far too many make after starting a family that can truly be called “juvenile.” Couples without children are harmless, happy, and secure in their free time, indulgences, and jovial pursuits. If they fuck up, fuck around, and just plain fuck, no one gets hurt. Ever. It’s only after the coos and cries are heard that we turn the world upside down. The little shits.