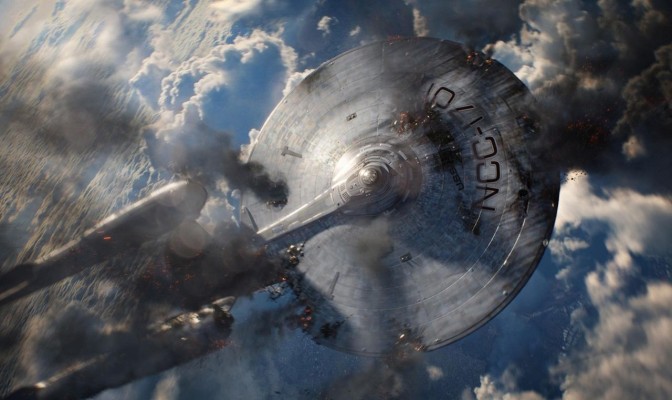 My initial reaction was to consider Stark Trek into Darkness to be a very lean, sleek gleaning of the external stylings of Trek in the service of modern action movie engine, but upon further contemplation, I think J. J. Abrams gets deeper themes underpinning the canon of Trek. I’d call this 4th best Star Trek film made, inferior to Wrath of Khan and Undiscovered Country, in competition with First Contact and The Voyage Home, well worth a viewing.

We begin in a red jungle and a chase sequence cribbed from Raiders of the Lost Ark. Wunderkind Captain James T. Kirk (Chris Pine) is playing fast and loose to try and score every win out the scenario of exploring a primitive world. His callous attitude towards the Prime Directive and the lives of his crew brings a comeuppance when the legalistic Mr. Spock (Zachary Quinto) present the inevitable report with Star Fleet Command, leading to Kirk’s demotion and the central interpersonal conflict of the film. Kirk and Spock are in a transitive state in this film; it’s no longer the open rivalry, but instead the frictious collision of two different philosophies of competence, a swashbuckler versus an officer, if you will.

Meanwhile, a rogue Star Fleet operative John Harrison (Benedict Cumberbatch) wages a one-man war against Star Fleet Command, seeking to air the darker secrets of the UFP. At first, I found this to be a surprisingly cynical move for a traditionally utopian science fiction; but then I recalled that every instance of the TV show has been replete with corrupt and callous admirals, the good ship Enterprise almost seeming like the one crew in the fleet that actually believes the ideals of the federation. Kirk’s competence under fire earns him a partial reprieve, as Admiral Marcus (Peter Weller) sets Kirk on the path after Harrison, assuming that Kirk will terminate the terrorist with extreme prejudice. A new science officer, Dr. Carole Wallace (Alice Eve) is also posted to the mission. 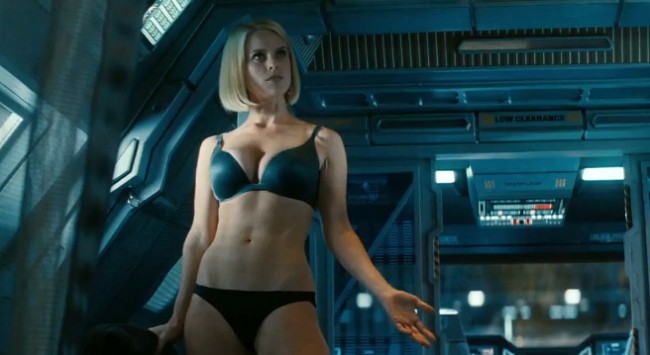 And so the crew of the NCC 1701 are sent on a dubious mission to chase a man full of secrets who is hiding in an isolated corner of the Klingon empire. Perfidy ensues.

There are many who will complain about Abram’s Trek as being a cold cash grab, which it is, but they miss the point. This is storytelling as it traditionally was. Before copyright monopolized canons, drama wasn’t about telling new tales- it was about who told the tale best. Everybody worked spinning their own variation off of the Round Table, the Argonauts, the Merry Men of Sherwood- and each bard had their own favorites and peeves that waxed and waned in the various tellings of the tale. Copyright has merely retarded, rather than arrested, this natural expression of human society. Sadly though, the regimen of modern copyright means that franchises shall be steered, not towards a great plethora of tellings variable to custom audiences, but instead towards the greatest common denominator. The Trekkies whining about the Abrams reboot are the hobgoblins of canonicity that plague every plank of geekery wide; but I would also argue their anger is about their loss territory, exclusivity- a mass market treks reduces the distinctiveness of the hard-core trekkie. How can you be a black sheep standing against the fold when the whole herd in the theater is bleating out for more?

Geeksthete: n. A dilletante of fandom; one who eschews affiliation with any single geeksthetic in favor of embracing and pursuing the diversity and quality of enjoyment that can be sought in all aspects of geekery.

Abrams’ strength is in recognizing this is an ensemble piece, and not just the Kirk show, or a Kirk/Spock buddy cop formula. Uhura (Zoe Saldana) gets to communicate; Dr. McCoy (Karl Urban) gets to gripe and needle; Sulu (John Cho), Scottie (Simon Pegg), they all get their share of lines. The pacing is tight, and I’d say Abrams has shot some excellent space combat- this is the Trek film that best deals with the topics of vacuum and weightlessness in the action choreography.

And Benedict Cumberbatch is tremendous. Regal, profoundly competent, not an ounce of flab in his dialogue. He owns the movie in every scene that he’s in. I get why this actor is becoming a big deal, and why it’s likely that he’s going to be a go-to choice for antagonist heavyweights in years to come.

Comparing Chris Pine and Shatner, or Quinto and Nimoy, is like comparing between men building cabins from scratch to architects with a full carpentry workshop. The original cast had to develop their performances de novo; the new kids have thirty years of novels and spin-offs and fan wankery to rely upon. Of course it’s going to be a better performance because the character’s have been fleshed out to an amazing degree.

That being said, this film has a rare concentration of actors who know they’ve reached their ‘dream roles’. Terence Malick’s The Thin Red Line carried a special electricity because it was full of high level actors who all regarded it as the ultimate prestige project- that film was like a giant act-off between the best performers that the 90s had to offer. For at least three of the cast (John Cho, Simon Pegg, and Zoe Saldana), they are playing in the role of lifetime, a part they dreamed about having for years. And that love carries over into a terrific and developing chemistry, one that could develop to be better than the chemistry of the original cast. I hope the third movie has the confidence to have a poker or pub scene where the bridge crew is just hanging out with each other.

The palette of the film is a contrast of bright primaries (the civilization of the UFP) and dark earths (the darkness of the outer universe). The sound and music is forgettable, except in being very loud and rumbly. The designs are great, being a sort of ‘Apple iTrek’ refitting of 1960s designs, with a lot of old canon shout outs (Tribbles! Harry Mudd!). around the edges.

Best of all, for all the dystopian edges of the film, the resolution of the plots achieves a landing back to the idealism of the original trek.

Fair Value of Star Trek Into Darkness: $22.95. Worth a rewatch, and a solid entry for any Star Trek movie marathon.

(TANGENT) The Cinearts 5 of Monument Boulevard in Pleasant Hill was recently demolished. A pedestrian ‘dome’ style theatre, I imagine I am a rarity for mourning’s it’s passage. After all, it has been superseded by sleeker, more efficient boxy film plexes with better sound systems and more neon. When my family returned to America, that’s where I saw Who Framed Roger Rabbit. Indiana Jones and the Last Crusade. The Rocketeer. Jurassic Park. I even had the fortune of catching a re-release of Raging Bull there. Park Square may lay claim to being ‘the’ theatre of Contra Costa. Metreon, The Castro, California Theatres in Berkeley, Del Mar in Santa Cruz- Northern California has some exquisite movie houses, better than Cinearts 5. But that suburban dome next to Montgomery Ward was my theater of choice and that magnificent main auditorium are gone, with nothing to mark nor mourn it. Such is the mercenary amnesia of the suburbs.