Home / Banner / Pictures From The Protests in Turkey

Pictures From The Protests in Turkey

So I went to Istanbul to take some relaxing tours of places where people were once beheaded, enslaved, castrated, tortured and forced into sexual slavery and these protests broke out right in my neighborhood so I took some relaxing tours of those as well. As a bonus, the location of the protests, Taksim Square, has also been the sight of the mass murder of past protesters. Pretty historical.

This conflict seems very tame by comparison. At times, it was stirring to witness tens of thousands from every demographic the country has to offer, apart from religious extremists (admittedly, Turkeys demographics have been narrowed by genocidal tendencies [Idea for Turkish skate punk band]) unified and asserting themselves in favor of things I like.

On Sunday, which was had been declared an armistice between police and protesters, there were plenty of old people and children milling about. This was fortunate for vendors selling Guy Fawkes masks because they were only really popular with the kids. But they made up for those losses by selling gas masks, swimming and skiing goggles, hard hats and food and water.

Dreadlocks were there, but they were outnumbered Polo shirts. The bulk of the group was a pretty even split between college age kids and the middle aged. All of them were there to stand up for a free, secular system administered for the public good, or something. It was a great thing to witness.

On the other hand, I regarded the barricades and burned out, graffiti covered vehicles and at times it felt very much like I was on the set of a movie. It looked too much like what it was supposed to look like to be completely spontaneous.

Certainly, the abundance of Anarchy symbols didn’t come from adherents of Bakunin, but from people who thought this scene could use some Anarchy symbols. Though, I wouldnt mind being wrong there, since Im in favor of some light anarchism.

True, there was a smattering of casualties on both sides. But you get over 100,000 people into a small area and start lobbing chemicals around and this will happen. Theyll probably tally a similar number of deaths back home in Vegas at the Electric Daisy Chain. A saw some tear gas launched , from a good distance, and the people around me seemed to find it exciting.

I saw the police on the other side of the square shortly before that and they seemed pretty relaxed, in spite of the cop who had died a few days prior. Some seemed apprehensive. None looked like they were gearing up to smash in someones head, from what I could tell.

Bull Connor was a man ahead of his time

I dont know what all of this adds up to. Is the decreased violence increased civilization? Sure. Theres also probably a lot less optimism for advancing towards ones own utopia and a bit less fear of foes achieving an abject dystopia than there was a few decades ago, when double digit death tolls in politically motivated violence were commonplace in Istanbul.

When someone asked me why the occupy movement hadn’t accomplished more, I told him it wasn’t as big as this was, but even if it had been, the US was now set up pretty well to insure that the public cant influence much. Dont blame me, I voted for Kodos. I asked if he thought this wave of protest would accomplish more and, if so, what. His response was vague.

As to the motivations behind all of this, I read some papers and talked to some people and here is what it seems like from an inside view point. Turkeys PM is Recep Erdogan. Recep Recap: he once did jail time as a pro-Islam dissident, has overseen a good economy, is thought to have become corrupted by his own power. He decided to allow a private developer to turn a buck by building a mall in the place of a public park in Taksim Square, which isnt exactly Central Park, but is a pretty important area. Thats why theres a bunch of construction stuff in the photos.

A fairly small group protested this and the police responded with violence, mostly in the form of tear gas. This sparked the massive protest in what appears to be a largely spontaneous expression of outrage over police brutality. A man of about 60 said to me how can the police gas me? I am their citizen! I explained that the police were instruments of economic progress now and that told him to get with the program.

The issue of police brutality also triggered a release of pent up frustration over Erdogans general abuse of power. His economic success has emboldened him to make a bit of a power grab, including using the law to enforce his Muslim ideals. He even wants to restrict the sale of alcohol. I guess he never saw the Married With Children where Al is stirred from non-voter to revolutionary by a beer tax. Erdogans initial reaction to the protest was completely dismissive which angered people further.

Under all of this, is the tension between the secular population, who seem to dominate Istanbul and the religious extremists who, as usual, are more prevalent in the sticks. Mustafa Attaturk is kind of Turkeys George Washington, though his celebration is more on the Kim Jong Il level, at least amongst secularists.

This is partially because hes seen as a talisman against Islamism because he is Turkeys greatest hero and was a liberal in the broad sense. I guess he was a recent enough figure that the theocrats havent been able to replace him with an imaginary version who agrees with them, as those in the US have done with our founding fathers. Therefore, you can waive his picture around and say youre a patriotic Turk and the theocrats are not. So his image alongside the Turkish flag is everywhere. I even saw a guy dressed up like him.

I feel pretty safe saying that the majority in Istanbul support the protesters. Nobody said anything negative about them to me, though Im told Erdogans supporters chanted for violence against them, which he did not comment on. At designated times, people bang pots and pans and honk horns in support of it all and most seem on board. 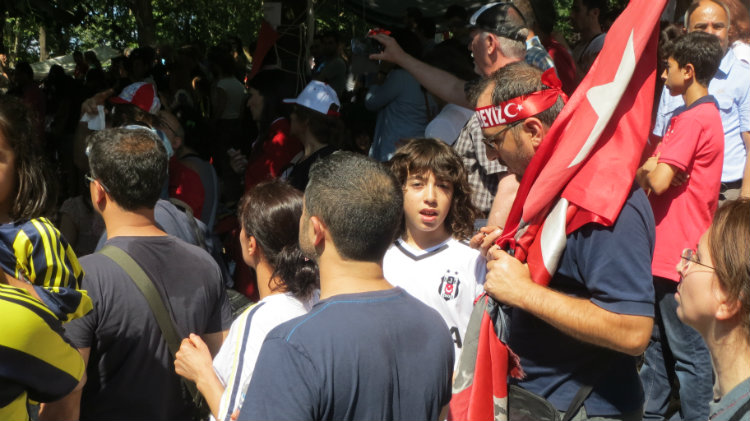 Of course, the motivations of the protest are very broad. Urbanites dont want provincial religious practices shoved down their throats. Police brutality is bad. A democratic country opposes authoritarian tendencies in an executive. Perhaps because few were getting overly specific, the mood was strongly positive and it seemed like everybody was on the same team, angry but not enraged.

So I woudnt say the whole country is suddenly reading Chomsky or anything, but at the same time you could characterize the  thrust of their gripes as being in opposition to the global rightward swing. The impact here, on public consciousness if not public policy, is much greater than what the occupy movement achieved. As of now, they’re going to keep the park but everyone is still pissed.