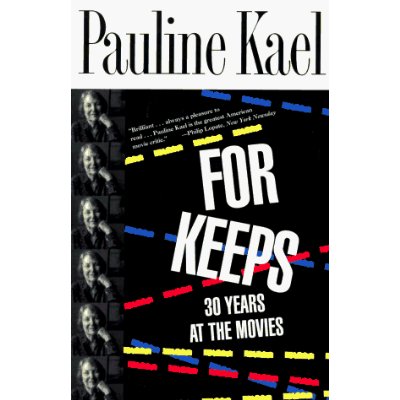 With the death of Pauline Kael in September of 2001, we not only lost a film critic with an unparalleled understanding of the medium, but our culture was stripped of a personality with raw, uncompromising intelligence – an American woman of letters who challenged criticism itself to live up to its self-imposed standards of truth and excellence, the public be damned. True, Kael stopped writing officially in 1990, but her influence continued to be felt throughout the world of film. Her advice was sought as an “elder statesman” of the craft, and too often I found myself (as did hundreds of others) wondering aloud, “Ahh, what would Pauline have thought of that one?” With so many quote whores and mindless boosters masquerading as critics, I longed for Kael in her prime; a time when no one, regardless of stature or popularity, escaped her poison pen. Writing primarily for The New Yorker during her many years as a critic, she refused to bow to the predictable styles and trends – star ratings, thumbs up or down, and strings of clich?-ridden quotes, all ready-made for newspaper and television advertisements. She wrote criticism; dense, poetic prose contained in dazzling essays that were often as challenging or intense as the films themselves.

Here, then, is a handy collection of Kael’s best reviews – not exhaustive, mind you, but simply the best (and cheapest) way to experience Pauline Kael in all her glory. The concentration is on films from the 1970s (what she, and other critics I admire, have said was the true golden age of cinema), but one is also treated to films from the 1960s and 1980s. Of course, there will be personal favorites that are left out, and there will be others that might not appear to have warranted inclusion, but I defy anyone to find a better collection of reviews, reflections, and biting insight.

What stands out the most when reading Kael is her utter disregard for “classic” labels. Sacred cows simply mean nothing to her, and she is at her gleeful best when applying her unique savagery to a beloved standard or timeless hit. More than being a bully, however, Kael wants us to see beyond the hype; to evaluate film based not on what others tell you to think, but rather on the film itself. It is often impossible to study a film devoid of its social context, but she insists that we try. Yes, a film might be part of a general movement (French New Wave, the counter-culture, etc.), but we should not let that dictate our visceral response – our gut instincts that are best represented by our emotional reactions. Kael, then, while insisting on the highest intellectual standards, wanted most to resurrect feeling in the viewing audience; to awaken a complacent, glassy-eyed America from its self-imposed slumber. We had become too passive at the movies, she believed, and until we could make connections with what we saw (rather than consuming the film as product), we would never truly understand the matchless power of film. What she would say about our current obsessions – box office receipts, opening weekends, flash, glamour, and celebrity – is easily deduced. Read any of the essays regarding “the state of the art,” and outside of a few dated references, her commentary is too easily applied to contemporary audiences.

For those unfamiliar with Kael, or merely curious to know my opinion on the matter, some might wonder what would be her most representative reviews. Of course, her highly influential review of Last Tango in Paris is a great place to start. I would also tackle Bonnie and Clyde, The Godfather Part II, Nashville, and McCabe & Mrs. Miller. For a more lengthy assessment of her abilities and ideas, I would advise spending an evening with her words on Citizen Kane. Still, there is nothing in these 1000+ pages I wouldn’t recommend, even when her opinions seem to be in direct opposition to common sense. Kael was a brilliant writer to be sure, but she was often (quite often) disagreeable and, frankly, dead wrong. Her tendency to lionize directors was often ahead of its time (in the case of Robert Altman) and sometimes inexplicable (as in her peculiar attachment to Brian DePalma), but she always challenged the reader to see it her way, if only through the sheer force of her personality.

Nevertheless, the evidence she presents – from details, observations, and allusions, to the tears, shouts, and screams from her personal screenings – all speak to a command of film history. Her opinions, therefore, have such force and must be taken seriously because she can make comparisons (from popular hits to obscure foreign releases) that few could even hope to achieve. Because of this, she is intolerant of any reader (or viewer, for that matter) who is not up to competing with her knowledge and expertise. Arrogance, you might say? I disagree. Rather, her constant demands on the audience reflect only the passion of discovery, and how film itself grows, expands, and increases in its relevance the broader our individual scope. Quite simply, could we ever hope to be moved by a Renoir or an Ozu if our consumption was limited to Sandler and Lucas?

So I beg you; read Kael as you would a book of the deepest philosophy. Read her before a film, and read her at its conclusion. Read her alone, and aloud to your friends. She is truly timeless and one of the few critics who can (and must) be read again and again. And if you find yourself shouting her down, shaking your head in disagreement, or pounding the table in frustration, know that you are reacting as you must. For if Pauline Kael is about anything, she is about the power of debate; always listening, pursuing, and shaking off the dead weight of our limitations in order to view the flickering images of our world as we never have before. But above all, there are the movies. Those glorious movies.