I typically don’t review first run movies as my low IQ combined with years of drug abuse, plus that time I fell out of a bunk bed as a kid, greatly diminish retention of what I just saw and I usually get lost in the plot anyway on the initial go round. It’s basically 90 minutes of me either whispering questions to my neighbor or an internal running dialogue of handwringing confusion – 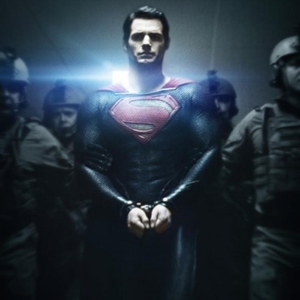 “How did they get the ship running again, I thought the engines had stopped working?”

“Where are they? Didn’t they take a plane to Florida? Or Texas?”

What day is it? I gotta go to the bathroom.
Oh my God.”

It’s an agonizing affair and surely nothing you want to read about. Prometheus nearly sent me back to rehab.

And with so much being shown in 3D you’re wearing them fucking glasses and you can’t take notes because your little notebook is blurry and nothing is as it seems.

But this time, since I knew I was seeing this before most of America via the trademark generosity of the Wal-Mart Corporation, I made a concerted effort to follow what the hell was happening. With that, and some assistance from this 7 year old kid next to me in the theater, I think I’m able to actually hash out a shitass review of this new Superman film.

Naturally, it’s a CGI bonanza, with director Zack Snyder starting us out on a wildly panoramic Krypton in the throes of its end days. It’s a spectacular reimagination of the destruction of Superman’s home planet and an immediate opportunity to show off new cinematic technology worlds beyond when they just shook the camera a lot in the 1978 original. It’s always fun too when Hollywood inserts some political message that alienates neo-conservatives and keeps them out of our theaters. In this case, it’s environmentalism and the Kryptonians centuries long depletion of their natural resources.

Apparently that sort of thing causes the middle of a planet to eventually blow up.

Jor El, Superman’s father, knows Krypton is doomed and there will be no survivors and plots to send his only begotten son to Earth. I mean, I know you know all this, but I recap that particular part of the Superman legend because, as an outside observer, it’s actually kind of hard to justify what Jor El is doing. In this version of Superman anyhow. See, Jor El has to use this thing he finds to power lil ‘Man’s rocket ship to Earth and Krypton’s military leader, General Zod, wants to use it in a last ditch, but seemingly as reasonable, attempt to save the planet before it explodes, or implodes.

That kid next to me said it imploded and he probably knows. It’s only in the second half of the film, when we learn Zod basically has to wipe out all life on Earth to save his race of people, that I only really completely took Jor El’s side in the disagreement.

In the end, Jor El gets his son off to Earth and Zod and his crew are sent off into the galaxy in a prison that surprisingly wasn’t as f/x cool as the one they were in in Superman II. I don’t remember, I probably never even knew in fact, how Zod’s team gets out of that floating spacejail but as you know, they eventually do and confront Superman on Earth.

Before that though, Superman, now known as Clark Kent, is given a genuinely thoughtful and intriguing character arc. I’m not saying this is a Herzog level examination of a man’s struggle to purchase true identity or longing for acceptance, but Henry Cavill’s performance, as well as the young actors who play him growing up, do a commendable job in showing a lost and confused, well, alien. Give it up too for Kevin Costner and Diane Lane, Clark’s earthparents, who both played it subdued and kept out of the way when it was time to let Superman do his thang.

I could have watched Clark going through the pangs of a supernatural childhood in a natural world all day. To their credit, the filmmakers came up with some pretty original ideas for a pretty unoriginal superhero – like didn’t you always wonder if Superman had such superhearing wouldn’t that eventually render him homeless and insane and begging Matt Cale for spare quarters on the streets of Denver? 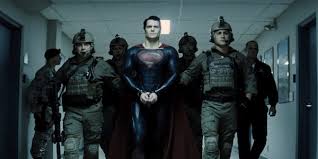 Matt Cale, who would then spit in Superman’s general direction. The movie tackles that in a clever way, for instance. Also, Lois Lane’s investigative journalism in hunting down the publicity shy Superman through backtracking and exploring eyewitness and head-scratching accounts of his amazing exploits, dating back decades.

I was totally sold on Clark Kent being a good, righteous chap. I felt for him when he was outcast at school, unlike say Peter Parker who I could give a shit less about, and I believed it when he showed moments of emotion, even, kind of crying at the end a little.

I think he was crying. Which leads me to my theory that I’m positing before any other person and it is this – there is a scene in the late 4th quarter of the movie where Superman is flying up toward a horrible enemy vessel (I didn’t fully understand exactly what the enemy ship was doing at that point because I am stupid) and there is this ethereal beam of blue light surrounding him and the camera pans in on Superman’s face and through movie magic I swear on everything good and holy that for about 3-4 seconds Cavill morphs into Christoper Reeve. I am telling you!

They threw it in there as an homage and I called that shit first. However, since our site admin will probably be drunk for the next 5 days plus recovery time, this review won’t get posted until two weeks from now and my brilliant observation will just then be sloppy seconds to like, some asshole in the IMDB message boards.

There are a lot of pretty solid, kinetic fight scenes and stellar use of CGI. This shit’s starting to look real, people. Awwwww shit. The oil rig fire was dynamic as well as what could have been the superior fight sequence on Main Street Kansas. This all, despite the fact they use that increasingly annoying battle tactic where one comic book man dive bombs into another and they fly 300 yards and that happens about 600 times in this movie but it’s also no dark, grainy Batman film where you can barely tell quite what’s going on. Metropolis is, of course, torn to shreds and you wonder how many people perished in an effort to save them but the villains are quite formidable and while Michael Shannon cannot compare to Terrance Stamp’s Zod, these bad guys definitely ratchet up the tension. Plus they’re very dope looking, in their alien gear and helmets.

There happened a couple gripes – my friend wanted a kneel before Zod moment, probably in no small part because he hates Obama and I longed for the famous John Williams’ fanfare. Why do these nostalgia remakes blue ball us like that? The A-Team did the same thing.

But, though the set up is there for an invariable sequel, on its own this was a helluva summer movie and I hope George Lucas goes to bed every night for the next few weekends this thing gets critical and box office raves, with the realization that he is an idiot and THIS is how you put an imaginative spin on an old tale and utilize computer generated visuals.

I got news for him, this Man of Steel franchise might even get better the next one out. The door is wide open for Doomsday, the comic book nemesis who eventually killed Superman. And if anybody can quite deal with that powerful and disturbing graphic tale, it is the guys behind the best super hero movie since The Dark Knight.

So get yourself a Wal-Mart cape and go enjoy the first great summer blockbuster of the year, folks!