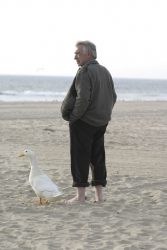 The most interesting thing about Duck is the fact that if you selected one hundred people at random, gave them each a camera, a film crew and $100,000, not one of them could produce a film that is worse. Not a one. Some guy filming his wall for two hours? More interesting. Some woman hanging out at a bridal store, discussing dresses? It would raise larger issues. A feature length Burning Man documentary? More subtle. A man beating his wife and children to death with a few bottles? Less horrifying. In the four or so years that I have been reviewing films for Ruthless only two other films can compete with Duck in terms of out and out shittiness. Those being Bob Dylan’s astonishingly horrible Masked and Anonymous and the before now unchallenged champion of bad, the lowly, wretched and pathetic Jump. While I can say with certainty that Duck is worse than Masked and Anonymous — and that means Duck is beyond the scope of the word “awful” — I am at a loss to say whether or not Duck is worse than Jump. It’s like comparing Pol Pot on a Monday to Pol Pot on Tuesday. One has to be worse than the other, but how do you measure? What’s the metric? Needless to say, all three films go beyond the normal trappings of lousy cinema. All three think that are clever and feel that they have something witty and important to say. In actuality, all three are insulting, pompous, full of shit and physically disturbing. And man… Duck very well might be the worst of the bunch.

For some time now our very own King of the Shithouse, Matt Cale, has been waging a one man battle against the “emperor is wearing no clothes” preciousness and phony insight of indie films. Cale knows that “cute” is no substitute for quality. That “clever” is a dead end and that nonsense is not better than no sense at all. Starting with the vile and offensive Garden State and most recently with his scathing attack on Me and You and Everyone We Know, Cale cuts through the “they’re so wacky, they’re great!!” mentality that engenders films of this ilk with meaning for people who desperately wish to believe they are intelligent, but are in actuality mouth-breathing imbeciles. Duck would cause Cale to lose an eye. My friend (hey, Slut!), who was unlucky enough to watch Duck with me, recounted afterwards that I was constantly smacking my own head, endlessly shifting back and forth, sighing and then leaning over the empty seat to my right and moaning. I caught myself drooling at one point and mercifully fell asleep for about thirty seconds near the end. Worse, the screening we went to was packed with the film’s crew (the director, all the actors, even the fucking duck itself) and all of their friends. So, whenever poor Philip Baker Hall had a lame, ignoble line of dialogue to speak, the theater would erupt in laughter. It was torture. Sheer fucking torture. I told my friend we could leave about one third of the way through. After the film, over some really shit pizza, she explained that she was pissed we didn’t.

So, how did I come to see a horror show like Duck? False advertising. My friend showed me an add she had cut out of the LA Weekly that said the following about Duck, “2009, Los Angeles is suffering under the regime of Jeb Bush.” There was some other stuff mentioned, too, but it didn’t matter. What a brilliant idea for a film, I so naively thought. Unfortunately, the part I tuned out was the stuff about a suicidal man and his pet duck. So, not only is this firmly tied with Jump — oddly, another single-syllable action verb titled film — as the worst movies these eyes have ever seen, but Duck also owns the award for ratio of expectation to disappointment. With Masked I had heard months of other critics vivisecting the film before I saw it, so I was expecting (and received) shit. With Jump I only rented it because Amanda Peat was on the DVD case, and she got naked in The Whole Nine Yards and I like her boobies. Duck however, had me expecting big things. Instead, I was cinematically sodomized against my will. Yes, Jeb Bush was mentioned and yeah, Social Security and Medicare were gone. But, they were treated like crappy little in-jokes rather than with any thought or elegance. So, instead of a meditation on the road to hell our country is enthusiastically driving 8 miles per gallon trucks down, we get treated to a limp-wristed version of Falling Down where a man and his duck want to walk from downtown LA to the beach for no fucking reason!

You probably want me at this point to recap some of the goings on in Duck so you can understand why exactly I hate it so fucking much. Not going to happen. I can’t remember shit. The best part of the movie was when some drunk woman puked on the duck. I liked that. Honestly though, I was so filled with disgust and anger over what I was watching that all dialogue has bled out from my brain. The basic plot goes something like this; suicidal man finds a baby duck, doesn’t kill himself and the two of them walk to the beach, enlightening others along the way. Oh, and this drunk chick pukes on the duck. And while I simply cannot for the life of me remember specific chunks of dialogue, rest assured that the general thrust of it was, “sometimes you should stop and smell the flowers.” Honestly, I cannot remember watching a more intellectually bankrupt film. Writer/Director/Producer Nicole Bettauer is… I’m having a hard time saying what needs to be said. Here’s a fucking fool who set up a scene with Philip Baker Hall and Bill Cobbs, both of whom are fantastic actors, and she makes it not only unwatchable, but literally painful to sit through. Nicole, you are a lousy person and I hope bad things happen to you. You do not deserve to be on my planet, let alone pollute the joint with this pathetic excuse for filmmaking. You make me question the maxim, “I don’t agree with a thing you say, but I’ll fight to the death for your right to say it.” I’m not exaggerating — that’s how shaken to the core I was by this piece of trash. Your film should be suppressed, for it is harmful. Honestly, if writer/directors could be imprisoned for making shit movies, you would get life. That way you could sit and think about what you have done. And rot.

I’m glad actually that I did not see Duck alone. In the awful pizza joint after the film, I was emboldened in my disgust and hatred by the fact that my friend felt EXACTLY THE SAME WAY. Now, aside from being an out-of-control drunk slut, my friend is a film buff and all of the non-Kinski Herzog films I have reviewed recently were because she lent me her Herzog Box set (which regretfully I gave back). Moreover, she went and saw Grizzly Man with me and agreed that it was indeed one of the best films ever made. So, she’s real smart, and while much more polite than I am (I seriously was spazzing out in the theater and I hope I pissed a bunch of people off), she felt and mentally-reacted to Duck as I did. The crapulentness of Duck did not stem from me having a bad day; the film was that fucking shitty. As we walked out of the theater she exclaimed, “What a piece of shit!” Then the two of us spent a good half-hour in dejected misery trying to adequately express to each other how lousy Duck was. Cathartically, here is a recap of what we said;

Jonny: That movie was fucking awful!
Slut: That movie was fucking terrible!
Jonny: Holy shit, that may have been the worst movie I’ve ever watched.
Slut: I’ve never walked out of a film, but we should have walked out of that one.
Jonny: I think I’ve turned off a few movies, but I’ve never walked out of a theater. I almost walked out of The Wedding Crashers, but only because I saw the preview for The Dukes of Hazzard. Fuck, we should have left.
Slut: Fuck!! That movie fucking sucked!
Jonny: Jesus… I really can’t believe how bad it was. I can’t believe it.
Slut: Oh my God, it was SOOO bad!
Jonny: It was worse than this pizza.
Slut: Have you ever seen worse acting?
Jonny: No, never. Seriously, never.
Slut: I hate Duck.

Etc. Friends, I dare any of you, any of you, to try and sit through Duck. I don’t think a one of you has the mental toughness required to endure vile filth like Duck. Without doubt, the worst film of the year. Cale be damned.