It is enough to say that Seabiscuit is well-crafted, suitably rousing entertainment, for that is all I expected. The book was much better at conveying the national phenomenon of the horse itself and what it meant for a nation mired in Depression, but that too was expected. The book was also better at exploring the dark side of racing (the eating disorders, the violence, the gambling, and the fierce competition), and once again, that was expected. Cinema rarely improves on the written word in terms of complexity or depth, so to find that the film version of Seabiscuit was competent was enough to leave me satisfied. There were dozens of changes or improvements I could have made (the ending, some of the character portrayals, etc.), but I’d rather admit that even at 140 minutes, Seabiscuit never drags, nor does it leave the viewer with any lasting disappointment. The racing scenes are thrilling, the sets brilliantly crafted and photographed, and the roles are earnestly acted. The narration by David McCullough lends credibility and seriousness to the project, and yet, I can’t help but feeling that it all wasn’t enough.

As a lover of horse racing, I was pleased to see a big screen portrayal of the sport, but as presented here, it is all too glossy for it to be labeled “realistic.” Yes, the film is based on a best-selling book that was itself a true story, but the film makes little effort to distinguish itself from a fable. We know it’s true, but somehow we just can’t believe it. In some ways, I felt the same about the book, given the Horatio Alger subtext and the come-from-behind tales that seemed to define each and every race. Seabiscuit was the stereotypical underdog; always underestimated and almost given up for dead. And his triumph over the odds, complete with a sad-sack trainer seeking redemption and a wounded jockey hoping to find a ray of sunshine, seems to be the improbable concoction of a hack Hollywood screenwriter. And yet, events unfolded much as we see them here, with the obvious changes here and there for the sake of time and continuity. It’s the sort of film even a non-fan of the sport could enjoy, largely because everyone involved is just so darned loveable. And who can’t relate to the simple man who tries and tries again, only to find success at the last possible moment? Hell, it’s my story only without the success part. 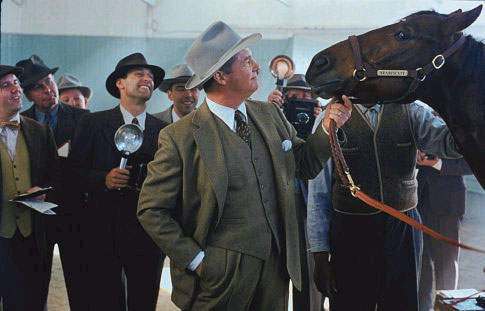 I might make Seabiscuit sound hopelessly lame and predictable, which would be the opposite of my intent. There is a formula here and it is exploited for full effect, but this is not a bad film. The depression was, of course, far worse than this film implies, and the larger social context is only a passing reference, but I won’t hold the film to such rigorous standards as it does not seek them. The film does show a headline or two and uses a slick talking radio man (played effectively by William H. Macy) to convey the craze many in the country felt for Seabiscuit’s rivalry with War Admiral, but the madness still seemed local, as if it never left California or New York. The book gave us a nation hanging on the fate of this horse, from FDR himself to the common man in the street, but the film seems to think it is enough to show how the respective owners of the two champions dealt with the looming match races. And the ending is unnecessarily abrupt, failing to provide an epilogue or even an “update” as to what happened after Seabiscuit’s glorious victory in the “Hundred Grander” at Santa Anita.

From Tobey Maguire as jockey Red Pollard to Chris Cooper as trainer Tom Smith, the actors play it well and never jerk us around for emotional reactions. The music swells from time to time to make sure we’re paying attention, but I have seen far more blatant displays of sugary sweetness. In all, Seabiscuit is a loving tribute to a fantastically gifted horse and the people who cared for him, but as a study of America at a particular time and place, it is definitely lacking. Oscar will no doubt respond as all things Americana seem to resonate these days, but don’t be fooled. Seabiscuit is a fun escape at the theater, but it won’t change cinema. Few films ever do, of course, but some at least have the desire to try. 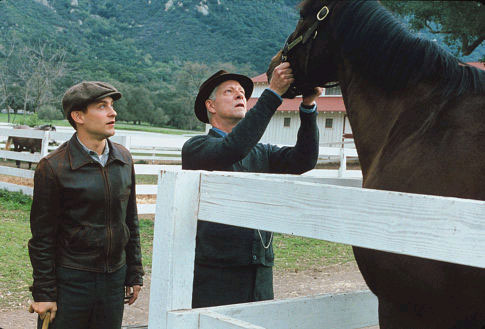 And now for the crowd, courtesy of the Thornton Town Cinema. From the geriatrics to the babies, the film was closer to a Rockies game than a relaxing day at the movies, but I survived. Fortunately, one of the screaming monsters was removed by its parent, but only after the revolting brat had all but ruined the first half hour of the film. After I moved to get away from the silly child, the family behind me proceeded to whisper and complain, although about what exactly I could not determine. Presumably they were not used to a film that exceeded 85 minutes or failed to include snappy one-liners or animated heroes. At least their bitching was in English.