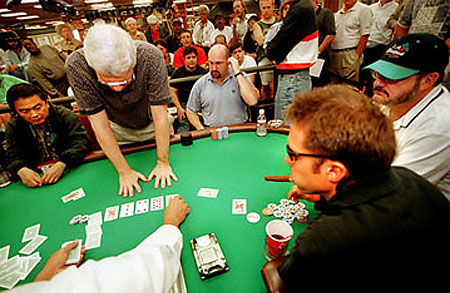 You should know that Erich is a degenerate gambler…

The World Series of Poker is the coolest thing in the world. While other televised tourneys primarily attract a crowd of now familiar tourney pros, like Gus Hanson and TJ Cloutier, the WSOP has a special drawing power. It’s like that classic of 80s Action cinema, Bloodsport (which for some reason we haven’t reviewed…). The best of the best from every discipline and every country come together to determine who will be champion. There are the tourney pros of The World Poker Tour (WPT), the pros from LA, Vegas, Atlantic City and Europe who normally eschew million dollar tourneys because they stand to make more in cash games, internet players and specialists in games like stud and lowball. All of them want those WSOP bracelets and the prestige they carry, and many of them have personalities befitting cheese ball action movies.

Whether or not it’s a good business decision, I’m very excited to see ESPN covering the majority of events in this year’s WSOP. For the first time we’ll see games like stud and Omaha televised. I’m not sure if the general population has an appetite for Razz, but enthusiasts will watch each event many times over. ESPN’s coverage is solid, although not great. The announcers both make errors, including the lead announcer, who routinely confuses raises and calls (how is that possible?). Here are a few other affronts in order of increasing severity. 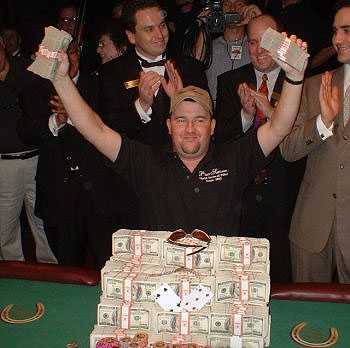 The Indian Poker tourney with the pros is fun to watch. But renaming it “Blind Man’s Bluff Poker” is PC bullshit.

The WPT and ESPN’s WSOP coverage each have a silly policy of not mentioning the other. Sort of like pro wrestling before the WWF bought WCW. On ESPN, they like to refer to the WPT championship as the “World Poker Championship,” which is confusing because the main event of the WSOP is often referred to as the “World Championship.” And, of course, because the WTP event is called the “WTP Championship!” That is it’s name! Why don’t the brains behind these programs realize that it is in their mutual interest to promote the game as a whole? You don’t hear the announcers and the French Open refer to Wimbledon as “The English Championship.”

This isn’t ESPN’s fault, but based on the matches I’ve seen, it seems that sportsmanship is now totally a thing of the past. The worst instance was in a no limit hold ?em event. Joe Awada demonstrated a lot of discipline in earning a win. Unfortunately, he didn’t actually get the win thanks to some very lucky breaks for “Crew” member (see bellow) Scott Fischman who, eeked out an undeserved victory. After pulling his hand away in the middle of Awada’s congratulatory shake, Scotty proceeded to roll around on the poker table. At this point I came to a much deeper respected for Awada’s discipline. Seriously, that is stupider behavior than even the buffoonish Phil the Unibomber dude on WPT. Had I been in Awada’s shoes, no more than one minute would have elapsed between the aborted handshake and my approaching Fischman’s father in the audience to present him with the freshly severed head of his repugnant child.

Why, why, why, why the fuck is ESPN trying to make celebrities out of Dutch Boyd?and friends, who call themselves “The Crew?” I guess that the producers feel that Boyd and company will appeal to younger viewers, but if you’ve seen an episode featuring them, you realize that “The Toolbox” would be a more fitting name for this bunch than “The Crew.” What you probably don’t know is that Dutch Boyd is the Ken Lay of poker. He was one of the key players behind an online poker room called Pokerspot that stole all of the money deposited by players before going bankrupt. As the site was collapsing and stealing deposits, Boyd sent out personal e-mails, assuring depositors that their money was safe. I literally can’t think of a worse player to use for the purpose of promoting poker. He’s obnoxious, he’s a thief and he’s reviled in the poker community. ESPN’s hyping of Boyd and his friends, and ignoring of the truth about Boyd, is bad for the product they want to promote. Really, I find it reprehensible. It’s is like only hyping Mike Tyson to boxing fans. Oh wait… Anyhow, poker deserves better. 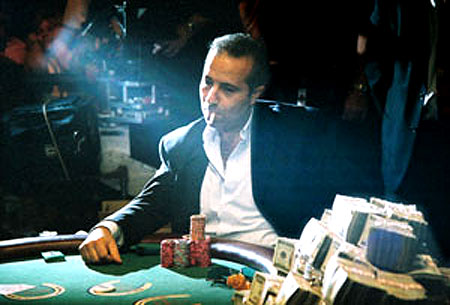 Overall, though, I am quite satisfied with the coverage. It’s wonderful to watch the world’s best apply their skills in so many different formats. In a perfect world, we’d see far more hands in each event, but if you told me 2 years ago that the Pot Limit Omaha championship would be nationally televised, I’d have thought you were insane. In other words, I’m very happy with what we got. I think as televised poker expands, and more people who know the game become involved, the quality of the broadcasts will improve from these solid starting points.