If you were to digitally edit Fight Club so that when the opening credits rolled the title of the film was now The Doppelganger of Mr. Poopy Pants and made the “Directed by” read “me,” your film would be less of a Fight Club rip-off than Secret Window. Sure, granted, writer Steven King added his patented, spooky, murder mystery “I wouldn’t open that door if I was alone in the woods with a man who just killed my dog with a screwdriver” mojo to the story. Then it was adapted and directed by David Koepp, and man who can be as good or as bad as he wants. Stir of Echoes was a compelling spook-fest. I loved Carlito’s Way, save for every scene with Penelope Ann Miller. Er, any scene where talks. And you all know how I feel about the first Spider-Man. However, Panic Room was worse than dog shit. So was Snake Eyes. Secret Window manages to slot in between all those films. Right before my suspicions were confirmed that, “Yup, this is a Fight Club rip-off,” I was thinking to myself, “Man, this is a fun movie.” Then Johnny Depp turned into a slight, goofy-ass Buster Keaton version of Tyler Durden and, well, I just sat there thinking how lame the movie in fact was. And wondered why Tony Simon is such a lousy writer. King even manages to plagiarize himself. Twice. More on that when the time comes. OK, so Johnny Depp is this writer named Mort and he lives by himself in a cabin by a lake. A man named “John Shooter” shows up claiming that Mort stole a story from him called “Secret Window.” John Shooter is portrayed with enormous contempt for the South by John Turturo. Shooter’s from Mississippi and he “tawks like tdis, all slow and drawly-like.” He loosely threatens Mort with some sort of blurry threat if Mort doesn’t… see for the first half of the film, we don’t know what Shooter wants from Mort. Turns out that he wants Mort to rewrite the ending of the contested story and publish it in Shooter’s name. To show Mort he’s serious, Shooter kills Mort’s dog with a screwdriver. Now at that point in time, I would buy some crystal meth and a shotgun. I would get really high and sit on my porch unsleeping and the second Mr. Shooter showed up I would shoot him in the face. Case closed. But since I told you this is a Fight Club rip-off, you already know that Mort is Shooter.

Running parallel to this story, is the business about Mort and his ex-wife Amy (Monica Bello). Secret Window actually opens with Mort breaking into a motel room to find Amy in bed with Ted (Timothy Hutton). They’re in the process of getting a divorce, but Mort isn’t signing any papers (because he’s crazy, it turns out) and there is no love lost between Ted and Mort. Also appearing in the film is the now three hundred and fifty pound Charles S. Dutton. Why he is in the film is so that the long-standing Hollywood tradition of the black guy dying first stays undisturbed. Now above I mentioned that these two stories are running side-by-side and Euclid proved that parallel lines never intersect (it may not be Euclid who proved that; I don’t get paid enough to fact check this shit), but in Secret Window, do they cross!?!!? Yeah, of course they do. 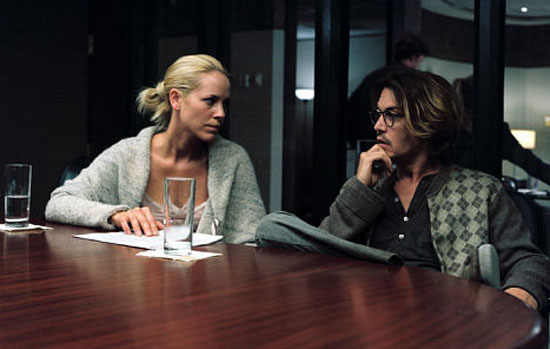 See, the name “Shooter” sounds really similar to “Shoot Her,” a little phrase that Mort carves into every wooden surface in the cabin. While the repetition of the line is way too similar to what Jack does in King’s own story The Shining (“All work and no play makes Jack a dull boy!”), so is the play on words. Shooter = Shoot Her as Redrum = Murder. I guess I miss math, what can I say? What’s next? A rapist named Mr. Meter? (“Meat Her,” get it?) Anyway, King digs shallow and steals from himself to complete this ultimately silly Fight Club rip-off. And yes, there is more to the rip-off than just one man thinking he is two people. The movie totally lost me when Shooter began telling Mort that “You invented me because you couldn’t do what needed to be done” or whatever he actually said. Exactly the same shit as when Tyler is telling, well, himself, “I dress the way you want to dress, I act the way you want to act. I even fuck the way you want to fuck.” You know what’s really been bugging me? His imaginary friend is named “Shoot Her,” and Mort attacks his wife with a pair of scissors and then kills her with a shovel. I guess “John Stabber” would have been too obvious. There is one major difference between Fight Club and Secret Window of course. Fight Club was an excellent movie while Secret Window sucked. Ass.