So where are we now?

We begin with Glen/Glenda, the long-lost child of Chucky and Tiffany, as he dreams about killing a British couple and sneaking a peak at a pair of East End melons. Before he wakes up from his nightmare, a young child roars at the “boy” — “You killed my mummy and daddy, and now you’re pissing your pants!” (That won’t be the only time we’ll hear that line). So on to the present day, where Glen/Glenda is a captive at the International Ventriloquists Competition in Glastonbury, England, and he’s known as “Shitface.” He escapes, and begins his journey to find his parents.

Did you just spend several sentences telling me that shit?

Things get even more bizarre when we cut to a scene of Chucky slashing Santa Claus to death in a snow-filled cemetery. Suddenly, we realize that we’re on a movie set and Chucky and Tiffany are actually just dolls. Or are they?

You asking me? You rented the fucking thing. Wife out of town or something?

Yes, actually, and this is all I could come up with. Anyway, Jennifer Tilly then appears as herself and, being as self-referential as possible, she states, “I’m an Oscar nominee and now I’m fucking a puppet.” Her career (in the movie and in reality) is in the toilet, and she’s looking to get the part of the Virgin Mary in Redman’s film epic about Jesus. Redman even says the classic line, “I got a very specific vision for Mary, and she’s done got to be hot.” 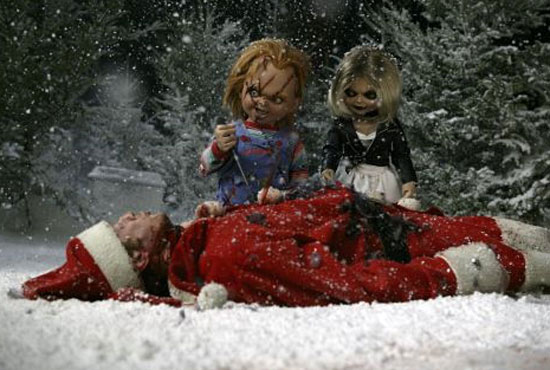 But that’s as bad as things get, right?

Not unless you count Tilly vomiting in her purse, lying on her back spread eagle while a puppet uses a turkey baster to inject Chucky’s sperm into her vagina, and finally, the scene where she gives birth to twins while Tiffany supervises the whole affair. Tilly also runs around screaming hysterically, which is fortunate given her endowment.

You mean the tits?

I mean the tits. While we never get to see them bare, we do get a glimpse of Tiffany’s rack, which is good enough as she’s the puppet version of Tilly.

If we’re denied human breasts, do we at least get to watch people die?

Over and over again, thankfully. First, Chucky and Tiffany saw a man’s head off with piano wire, which leads to a great scene where the head flies up in the air, blood splashes on the doll’s faces, and they embrace as if aroused. Tiffany also disembowels Redman while he eats chicken and corn bread, and Tilly’s assistant, Joan, is set on fire by Glen/Glenda, right before he announces that he’s a transvestite puppet who frankly, loves to kill. 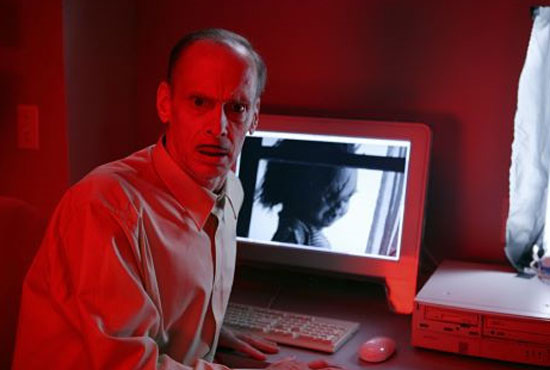 Why yes, and a long one at that. Chuck uses a Fangoria magazine to get stimulated and then collect his sperm in a container for the insemination of Tilly. Every so often, we cut to the bathroom where he’s jerking off and he’s either throwing his head back in ecstasy or stroking with enough force to start a small fire. All the while, John Waters is outside taking pictures, natch.

What in the fuck is going on here? Did you really sit through this?

Like a well-behaved child waiting for a spanking, dear ones. And the hits keep on coming: Waters’ face is eventually eaten away by sulphuric acid, Tilly’s limo driver is tied up and has an axe slammed into his chest, Tilly goes from conception to childbirth in literally two days (it’s explained as a “voodoo pregnancy,” where months pass by in hours), and both Rebel Without a Cause and The Shining are referenced within five minutes of each other. And when did Chucky’s voice start to sound like Danny DeVito’s?

So why does Chucky kill Tiffany, the love of his life?

She threatens to leave him and become human. Chucky loves being a puppet and refuses to transfer his soul into Tilly’s male child, so he slams an axe into her head. He then cries, “This is nuts! And I have a very high tolerance for nuts!” As do I, apparently. 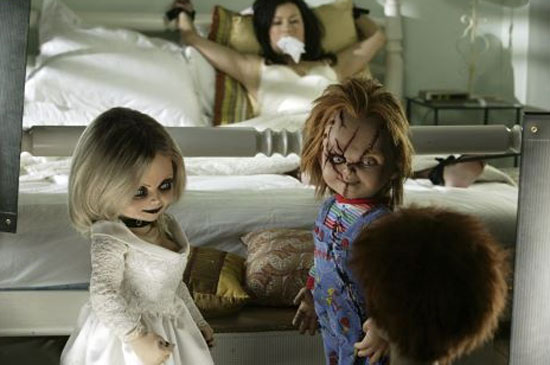 I’m on pins and needles here……How does this shit end?

Glen/Glenda freaks out after his mother is killed and he chops Chucky into little pieces. But an arm survives, and five years later, it is given as a gift to Tilly’s now-grown son. As we leave the film, Tilly is murdering her maid with the Tiffany doll.

What about the whole Britney Spears getting offed thing?

Could anything matter less?

Any possibility that McDonald’s will ever pull their fucking DVD machines?

No chance — I’m not that lucky.