Well, The Shipping News is not as bad as I thought it would be, but it is pretty bad. Even Kevin Spacey turns in a bad performance for the first half of the film by portraying his character as such a nebbish that he seems lobotomized. Then the character, Quoyle, moves to Newfoundland, gets some fresh air and becomes a master journalist who has a beautiful girlfriend and is popular around town.

That’s the basic story and it’s a bit rickety to begin with, but as it is fleshed out it crumbles. The change occurs in Quoyle very easily, so there’s a lengthy series of twists and turns to keep things busy. A few of them are that Quoyle’s parents commit double suicide, his grandparents turn out to be pirates, he meets a woman who has sex with him for no reason, then marries him and has his kid for no reason, then sells his kid on the black market, then drives into a river and dies. Then Quoyle’s heretofore unknown aunt shows up, but it turns out that she’s his mother and it turns out that she was raped by her brother. Toward the end, just after one character unexpectedly died, I was thinking that this film has more revelations than the library at Oral Roberts “University.” Then the guy wakes up at his funeral. See, they thought he had drowned, but it turned out that the cold water had just slowed his body down enough that it seemed as though he was dead. I would have thought that doctors working in a harbor town in Newfoundland would have known about the effects of cold water. 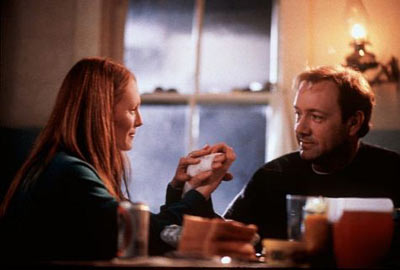 The Shipping News has one very Ruthless moment, however. Quoyle’s mom steals his father’s ashes so she can piss on them. I also enjoyed the setting.