Home / Documentaries / HOME OF THE BRAVE

HOME OF THE BRAVE 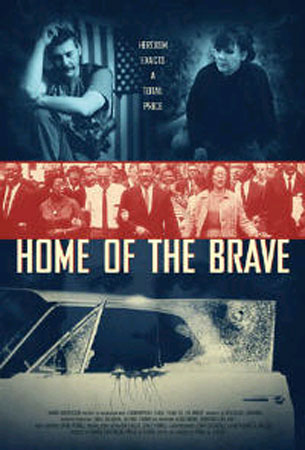 Fuck J. Edgar Hoover. In a nation teeming with pricks, assholes, scoundrels, bastards, and SOBs, no one has been worse. And while I could spend numerous paragraphs describing my loathing and what I would like to do to his bloated, maggot-ridden corpse, it is enough that I register my ultimate disgust. I am not usually moved to politically correct gestures, but I am hereby spearheading a campaign to remove the cocksucker’s name from the FBI building in Washington D.C. posthaste, as well as the push to speak of him only in the tones now reserved for history’s mass murderers and psychotic madmen. Fortunately, if he is now remembered at all, it is usually with a chuckle, as his reputation now consists of little more than innuendo and assumed homosexuality, up to and including rumors of cross-dressing and obsessive buggery. And I am content with that. Still, he should not merely be an object of laughter and ridicule, for few individuals have been so dangerously powerful; and in the process wrecked so many lives and trampled on so many hard-won civil liberties. We must move from humor to rage, lest we minimize the true crimes of his reign.

I open with a much-deserved blast against Hoover not simply as an indulgence, but rather as an appropriate set-up for a striking documentary about racism, murder, and official secrecy. Home of the Brave is a shattering experience in many ways, largely because the woman it brings to life — Viola Liuzzo — is all but unknown to us, despite the fact that she was the only white woman murdered during the Civil Rights struggle. In March of 1965, inspired by Bloody Sunday, Liuzzo left her suburban residence in Detroit and came to Selma, Alabama to help in the cause of voting rights for blacks. On a lonely road, Liuzzo was shot to death by members of the Ku Klux Klan, one of whom was an FBI informant. Liuzzo’s passenger, a black man, was unharmed, which is attributable only to the fact that Liuzzo was shot as the car was in motion. Had the car been stopped, both would likely have been executed. The crime shocked the nation at the time, and its motivation could only have been that as a white woman, Liuzzo was assumed to be a whore intent on bedding black men by the dozens. And as we know, the surest way to inspire the wrath of limp-dicked Southerners is to flaunt one’s sexuality. In fact, numerous leaks regarding Liuzzo’s alleged “loose ways” came to light in the days and weeks following her death, all of which had their origin in the office of Mr. Hoover.

From the FBI’s standpoint, Liuzzo had to become the target of the smear campaign because of the embarrassing fact that in all likelihood, the trigger man, Gary Rowe, was that very informant paid to expose the Klan’s crimes. He had committed violent acts in the past (even bragging about his ability to administer beatings), so killing a white woman would not be too much of a stretch. As a distraction, Liuzzo was treated with contempt and bitterness, for why else would a vaginal smear be part of an autopsy for a individual shot in the head? Hoover’s files even pointed to her shocking behavior, such as “riding with black bucks” and other such crimes against whiteness. As a result, it should surprise no one that Liuzzo’s FBI file was thicker than that of the Klan itself. The Bureau could understand blacks helping other blacks (as much as they worked tirelessly to undermine such activities), but when whites got involved? Simply beyond comprehension. Such people could not be compassionate, just, or loving; they must be whores, deviants, or Communists; most likely all three.

The story of the crime and Liuzzo’s sacrifice is fascinating in its own right, but the documentary takes an even more interesting turn in the second half, as one of Liuzzo’s daughters travels back to Selma to meet with old friends and those who were there at the time of the murder. The daughters, while overcome by white trash syndrome, are relatively normal, but the sons have gone completely off the rails. One, a proud member of the Michigan Militia, has been reduced to crippling paranoia, and despite sounding like Terry Nichols or Randy Weaver, he claims that his hatred of the government is right in line with the loving memory of his mother. But given the man’s obsession with guns (he wears at least two shirts that speak to his lust for the Second Amendment, as well as a handy sidearm), it seems unlikely that his mother — a woman who met her demise at the end of one of these same weapons — would applaud his descent into madness and suspicion.

Given the FBI’s cover-up and campaign against his mother’s reputation, he has every right to loathe the government, but when he starts speaking of black helicopters and “going underground,” any compassion for his plight is immediately lost. Instead of being a loyal son holding a candle for his late mom, he is yet another lunatic who “works” for justice by retreating to the woods and hoarding weapons. The other brother, who is never seen on camera, has been “missing” for decades; another victim of paranoia and fear. And when we come across an ad hoc “village” where it is rumored that the brother might appear, we meet his fellow travelers, crackers all, who actually say things like, “some of my best friends are black” and other representations of their deep, undying racism. There’s also a black doll hanging from a tree in plain view. Is this what it’s come to? The children of a Civil Rights martyr have turned to bigotry and seclusion?

In the end, it is enough to bring Liuzzo’s story to light (I’m shocked there hasn’t been a movie, since Hollywood loves nothing more than telling the story of the era through the eyes of whites), but the resulting family dynamic adds a layer that could not have been anticipated. It is a tale of hatred and corruption to be sure, but also one where the depressing reality hits home that the cause for equality is now seen as a dead issue, “yesterday’s papers” rather than being of topical interest. Consider George W. Bush’s recent speech from New Orleans, where he seemed to discover poverty and discrimination for the first time, as if people lived in squalor because they got tired of their summer homes in New England. Race and poverty are inextricably linked, yet it’s enough of a chore to get people talking about class in this country, given the Horatio Alger myth that continues to confuse and distort. Billions of dollars were pledged, but outside of running to Kinko’s to print the money that does not in fact exist, it is a symbolic — and hence empty — gesture. This money, if found, will go towards no-bid contracts and Bush cronies with minimum wage laws suspended, only accidentally making its way to the pockets of the most needy. Even after a disaster of mammoth proportions, trickle-down economics reigns supreme. 1965 is closer than we think.

To wrap up how far we’ve come only to retreat once again, the film shows a few Selma locals on election day speaking much as they would have forty years ago. One, apparently unaware of (or unconcerned about) the black man sitting three feet away, says that Liuzzo should never have been in Selma, as this was a “local problem,” which then and now is code for “we’ll kill our own Negroes, thank you very much.” Another old couple, clearly nostalgic for the days when blacks swung from trees instead of holding jobs, “aren’t really sure” about blacks now being allowed to vote, which proves conclusively that for most, the opinions and attitudes one holds at 25 will be exactly the same at 75. Do human beings evolve and grow, changing with the times? Of course not. The law may compel certain behaviors and curtail others, but the hearts and minds of the people hold fast to dying traditions. Once a cracker, always a cracker. Viola Liuzzo left a husband, five children, and the safety and security of home to put her life on the line for a cause, and she paid the ultimate price. And as much as I’d like to believe her death changed the world, I’m not so sure. After all, she failed in the end to change her own children.