A HISTORY OF VIOLENCE

David Cronenberg’s A History of Violence is undoubtedly the most wildly overpraised film of the year; a work of insipid turns, embarrassing performances, and plot twists so ham-handed that the screen all but pulsates with its own failed vision. There isn’t a moment that isn’t telegraphed well in advance, and the alleged depth  some such nonsense about the nature of violence  is instead rendered as nothing more insightful than “you can’t escape the past.” From the opening scenes, I sat in stupefied silence as I watched the story grow increasingly preposterous; leaving its subtlety and mystery behind in favor of its graphic novel roots. One has to expect that any film based on the fantasies of feverishly erect teenagers would descend into the ravings of a carnival barker, and this mess is no different. But whereas something less pretentious like Sin City understood that it inhabited a world unlike our own, A History of Violence tries to portray it “as it really is,” despite the fact that nothing even remotely worldly occurs. And when the guns start blazing, what we are left with has even less credibility and substance than the Death Wish installment of your choosing, only without any of the humor or childish sense of play.

The moment we begin our stroll through a small Indiana town, we know that all is not as it seems, for why else have a film in such a place? Red state Americana seems made for stories about buried longings and terrible secrets, which is appropriate in that God-fearing Bible folk are usually the ones who molest children, stack cum-filled corpses in the attic, and murder their families out of a misplaced sense of their own importance. In some ways, Cronenberg is pursuing the same “truths” here, only the result is not at all surprising, nor is it all that revealing. Tom Stall (Viggo Mortensen) owns a diner, loves his apple-cheeked children, makes love to his wife like a corn-fed champion, and seems to know everybody in town. If he wanted the jobs, he could be both sheriff and mayor. So when he skillfully guns down a pair of desperate drifters who have wandered into his restaurant with ill-intent, we suspect that the obligatory chickens have come home to roost. The townspeople and Tom’s family don’t suspect a thing, but once a collection of gangsters in dark suits start making trouble, eyes begin to narrow. One bad dude in particular (played with give-me-a-fucking-Oscar gusto by Ed Harris), seems to know Tom, and calls him Joey with a familiarity that cannot be faked. What’s going on here? Why do these men want to take sweet Tom away from his family? 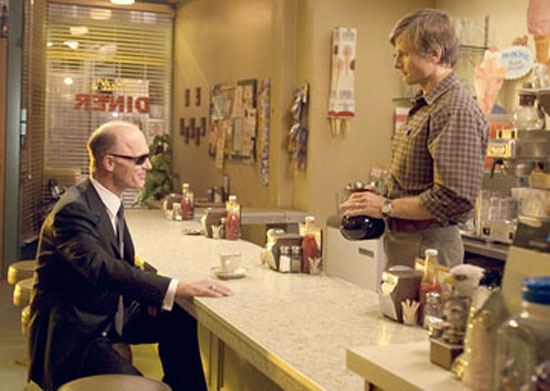 If you possess the intellectual gifts of your average first grader, you will know that these men want to kill Tom because he did something awful years ago, and his appearance on television after the diner slayings has refreshed the memories of some toughs back in Philly. I always wonder why rich and powerful gangsters are only able to locate traitors after watching the news, but Hollywood has rarely trafficked in mobsters who weren’t hopelessly simplistic. But the best men are sent to retrieve Tom/Joey, only he’s gone straight now, see, and he wants to let go of the pain. Thankfully, Tom isn’t being sought out in order to pull “one last heist,” but this shopworn script does the next worst thing. Tom kicks more ass, kills a few thugs, and is rescued from certain death by his son, who has apparently learned how to use a shotgun with great precision in a matter of minutes. But don’t you see? Violence breeds violence, and the apple doesn’t fall too far from the tree. I’m sure there are other tired idioms and cliches to describe this turn of events, but I’ll leave those for another day. As with the diner massacre, the killings in this scene are brutally realistic (and full of splattering gore), but that only serves to magnify how unreal the rest of the movie really is. To watch Tom escape the clutches of his would-be killers might happen in a graphic novel, but in a movie that claims to be a message picture, this is unforgivable. The moment we leave planet earth and enter a kung fu fest, any attempt at moral instruction explodes like the brain matter from a gangster’s skull.

But apparently, Cronenberg wanted to save the worst for last, as the final act contains the single most jaw-droppingly bad performance of the year. William Hurt, once quite respected in his field despite the curse of blandness, plays a kingpin named Richie Cusack, the long-lost brother of Tom, but also the least convincing “made man” in the history of the genre. Sporting a silly beard and affecting a pseudo-Italian/Irish accent right out of the Ed Wood school of dramatic arts, Hurt prances about, barks orders, shrugs, and talks tough as if he were begging to have his career killed. Perhaps he was so self-conscious of his white bread image that he decided to become something no casting director who wanted to work again would ever dream up. Hurt’s scenes are brief (he too is shot by Tom, as if I had to tell you), but the impression will be lasting. If he’s not remembered at Razzie time, the universe makes even less sense than I first thought. As if Hurt’s dreadful preening weren’t enough, Tom once again blasts everyone in the room, despite the situation initially appearing hopeless. Three armed men with knives, guns, and muscles to match, plus an attempted garroting? Why, this is Joey from East Philly you’re fucking with — he can take on all comers. Rather than indict violence as a solution for life’s woes, the film seems to endorse such methods, just so long as the moves are hot and the retribution brilliantly choreographed. 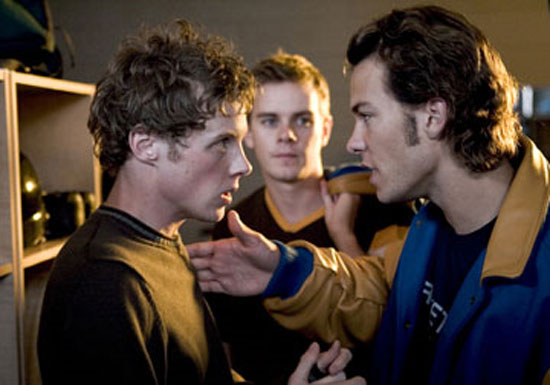 We’re also supposed to learn a lesson or two from the example of Tom’s son Jack, a wimpy kid who is picked on so relentlessly, that we know a bloodbath is coming. The young man takes it for awhile, but seemingly inspired by his father (or is it in the genes?), he kicks fucking ass one day at school, a torrent of groin shots and bloody noses that, you guessed it, moved the audience to applause. Normally I would blast the ignorance and bloodlust of the cretins who shared the theater with me, but as presented by this simpleminded film, their reaction was the only possible response. And given the pretty boy arrogance of the bully, who on earth would really object if the little shit got a little taste of the fist? If what Jack does is wrong and warrants our condemnation, why then make the target of his revenge so one-dimensionally obnoxious? Shouldn’t there be a bit of ambiguity so that we are forced to assess our own values? It would be like expecting an audience to demonstrate restraint after watching a skinhead get shot in the middle of a cross burning. Sure, perhaps the punishment doesn’t exactly fit the crime, but are we really worse off in the end? In order for violence to be seen as improper or unwarranted, there must be an actual choice; a challenge to our hearts and minds that calls into question the very nature of our humanity. But a street punk who killed welchers and rats, graduated to the status of a hired gun, and eventually gave it up, only to kill scumbags and criminals once again? Does that really say anything about the nature of the beast? 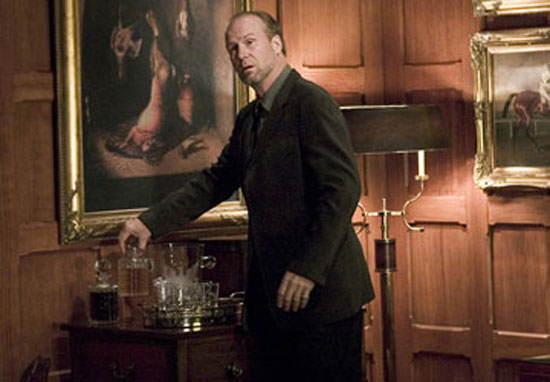 The only scene that held any truth whatsoever occurred after Tom’s wife Edie (Maria Bello) learned the truth about his bloody past. Walking away in disgust, Edie is apprehended on the stairs, where slaps and chokes are exchanged. In a flash, Tom is ramming his cock up, down, and through Edie, all to her squealing, sweat-filled delight. Knowing that her husband has taken lives only adds to the eroticism, and it’s probably the best sex she’ll ever have. We know this because for most women, the only men worth baring their pussies for are rough, brutal, and in the best of all worlds, cold-blooded killers. Nothing spells multiple orgasms better than unapologetic homicide. Had the remainder of the film been this honest about what turns us on as a species, it might have fulfilled its initial promise. Instead, it abandons its hunt for bigger game and settles for a domestic drama of “hidden lives” that would barely pass muster on the Lifetime network. We can practically hear Edie scream, “I don’t know who you are anymore!” But I leave the howlers for the son, as he says to his humiliated father, “If I go rob the drug store, will you demand a piece of the action? If I tell people about you, will I get whacked?” In any universe, it’s clumsy writing, and certainly not worthy of a film with what I assumed was top level talent. But as usual, the advance buzz was just a bunch of noise — jaded critics who have stumbled through a terrible year at the movies and are desperately trying to find a winner.