When I was in college I used to really love Highway 61. I just thought it was so good. Watching it ten years on, Highway 61 is just not as good as I remember it. Parts of it are clunky, the acting is sub-good in places and the ending is just a big giant cop out. Now that said, Highway 61 is still very entertaining and worth watching. If you havent seen it, I would tell you to do so. In fact, the movie is actually quite influential, which Ill get into in a bit, and it has some fantastic scenes. Plus, its Canadian. Wait, Im not sure if that goes in the pro column or the con one. Now, once again, all that said, Highway 61 features one of my most favorite characters of all time; Earl Pastko as Satan.

Let me get the plot out of the way and then well talk Satan. Pokey Jones (Don McKellar) is a small, small town barber. More importantly, he is a trumpet player who dreams of going down to New Orleans. He also really loves Bob Dylan. He has a suitcase all packed up in his car, ready to go. He just doesnt have the courage. One morning he finds a dead body out back behind his shop. Since it is obviously the only newsworthy item to befall that town–maybe ever–the local paper makes a brouhaha out of it. The news catches the eye of Jackie Bangs (Valerie Buhagiar), a roadie on the run from an abusive tour manager in Thunder Bay. She claims the body is that of her brother, Jeffrey. Really though, she ripped a kilo or so of coke off her former boss and is going to stuff it into the corpse and go “bury” her “brother” in New Orleans. Pokey eventually offers to drive her down, figuring they can make a road trip out of it. You know, seeing the states with a dope-stuffed corpse strapped to the roof of your car. Oh, and one of the ways the film is influential is that one of our favorite bands, Agoraphobic Nosebleed has a record called Corpse Stuffed With Dope. See?

Heres where Satan comes in. Satan, who lives in Baton Rouge, Louisiana, spends all his time running around North America buying peoples souls. He in fact showed up in bumfuck northern Ontario where Pokey lives to claim the soul of the dead guy. It turns out however, that Jackie Bangs beat him to it. She took the body and ran. Satan sets off in pursuit of Jackie and Pokie. While still in the town, Satan walks up to Pokeys best friend and offers to buy his soul. He offers the guy anything he wants, “A yacht the size of a football field.” To which Pokeys friend answers, “Beer. Do you got any beer?” Satan, caught off guard, but still being Satan says, “Beer… Beer I dont got. But I do have a mickey of Bourbon.” And just like that, Satan buys the guys soul. In one of my most favorite parts, Satan is looking at a bunch of Polaroids of the people whose souls he has recently purchased. He says something along the lines of, “One mickey of bourbon–$6.65, one used TV–$58.00, owning a soul for eternity–priceless.” He actually fucking says that! And, this movie came out in 1991, was filmed in 1990 and that is way before those MasterCard commercials. I mean, holy shit! MasterCard so obviously ripped Highway 61 off. Someone should sue someone. More importantly, MasterCard is basing its ad campaign around what Satan says while gloating over all the souls he has collected!!! Double holy fuck! Come to think of it, credit card companies really don’t differ much from eternal, never-ending darkness, do they? And Satan gets even better than that!

In what is absolutely my favorite part of the movie, Satan stops off at a church in small town Missouri. “Church?” I hear you thinking, “why would Satan go to a church?” Answer: To play bingo! Turns out, Satan really likes playing bingo. And he keeps winning and winning and winning, much to the frustration and humiliation of the town locals. After he has literally won ever single prize, another player accuses him of cheating. Satan gets in the person’s face and says, “Lady, you cant cheat at bingo. If you could I would, but you cant. Im just lucky,” Satan stands and buttons his coat before continuing. “Lucky to wind up in a town full of losers!” I mean, fuck, you need to see Highway 61 if for no other reason than this scene. Also, on his way out of the church, Satan throws a macramé flower pot holder he won into the trash, with the whole church watching in horror. 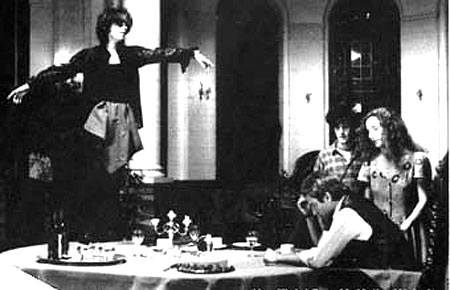 While it is true that most of the great moments in Highway 61 were reserved for Satan, there are some other pretty great parts that happen to be Devil-free. Like the coup of casting Jello Biafra as a US border guard. Brilliant. Honestly, the role Jello was meant to play; his role of a lifetime. And then, in what has to be one of the most bizarre sequences Ive ever watched, Pokey and Jackie show up at some rock star couples house. They are multimillionaires and drugged out of their fucking skulls. When it is time for dinner, the husband distributes handguns to everyone and the butler releases about five chickens(!). For the next five minutes, the dinner party is running through the house trying to shoot chickens… for dinner! Inspired. At dinner the husband suggests that he and Jackie should have sex. While he is saying this, the wife starts crawling and then standing on the kitchen table. Pokey seems a little upset, so the husband blurts out, “Dont worry, Im a bisexual!”

Again, while not the best movie youll ever see, Highway 61 has a lot to offer. Satan absolutely fucking rules. Especially when he tells a little girl that shell never be famous because shes ugly! Pokey and Jackie are pretty fun to watch, even though he looks mildly retarded and she looks like a man half the time (It was weird, because my friend and I both couldnt decide if she was really hot or really man-ish). The story itself is just an excuse for a road trip, and like I said, the end is something of a let down. Though I can assure you that if you were to turn the movie off with about five minutes left to go, you would walk away from Highway 61 quite satisfied.