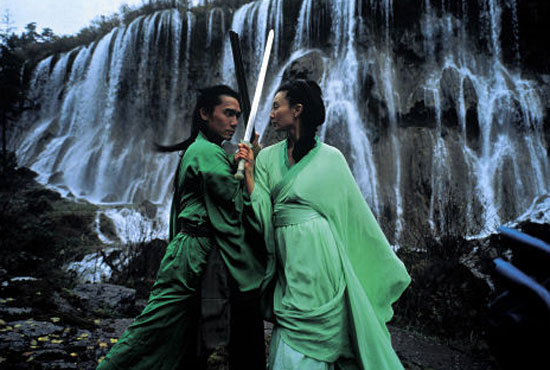 Hero is “presented by Quentin Tarantino,” which is appropriate because it is a film with everything but substance [Ed Note: Apparently, Miramax was going to edit it bunches because they thought it was “too Asian.” The QT convinced the fatter Weinstein to leave the film as is and Quentin would attach his name to it]. The story is a patriotic, oh, wait, Im supposed to say “nationalistic” because its a country besides the US of A… Anyway, HeroI s a fable about the origins of a unified China. Nameless Hero (Jet Li) approaches a Ruthless Emperor who is on a Machiavellian quest to conquer the warring states that compose what is today China, thereby bringing unity and peace to the land. Li is one of four super assassins who do or do not wish to kill the king and/or each other. The story of who wants to kill whom and who did killed whom and who will kill whom is unraveled Rashomon style as Li and the Emperor talk. The story and characters are decent, but both primarily function as pretexts for some fight scenes, some different fight scenes between the same people and some operatic melodrama. And some fight scenes. But again, although substance is lacking, this film has everything else. By “everything” I mean:

1). Hero is a gorgeous film. The imagery, colors and cinematography are stunning, as expected. Zhang Yimou could shoot a toilet paper commercial and it would be one of the 20 best films of the year on the basis of pure beauty. We would see flowing, pure, white Charmin fill the screen as a beautiful woman, clothed in a white, silk robe committed suicide in the arms of her albino lover, spilling bright red blood which is efficiently absorbed by the quilted tissues. Had the story and characters of Hero been more substantial, I might have complained that the beauty of the filmmaking often overwhelms the narrative.

(2) You might remember Ziyi Zhang as a young warrior in Crouching Tiger or as the reason you stopped throwing up for a few minutes during Rush Hour 2. She is in serious contention for the title of hottest woman in cinema, given that Catherine Zeta-Jones seems to be abdicating (pregnancy seems to have hit her hard, as evidenced in those Cingular commercials). I dont know much about Ziyis character, Moon, because I stopped reading the subtitles when she was on screen. She is a perfect combination of beauty and cuteness and one more reason that I am baffled by the fact that Lucy Liu is Americas token, female, Asian star. 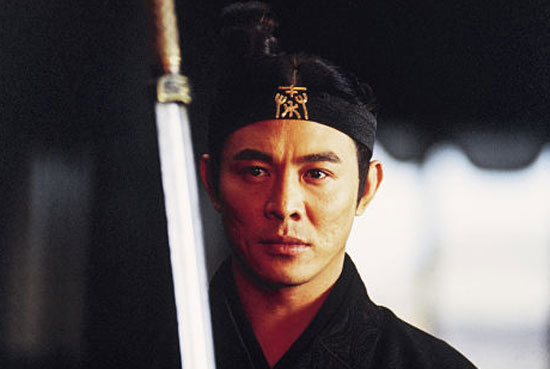 3) The fight scenes are excellent. Ive always loved Jet Lis skills and demeanor and hated the fact that they were wasted in bullshit movies with lame fight scenes. So it was nice to see him in an “A” level picture for once. I have a semi-criticism here. I understand that kung-fu super powers are part of Chinese mythology. In fact I recently had to summon every ounce of willpower to maintain a straight face when a Chinese co-worker solemnly told me that her great-grandfather had been able to walk on two fingers. Nonetheless, it is difficult for me to get into a fight scene in which the combatants are walking on water. I cant help it. I realize that Chinese culture wont be altered to meet this preference, but I like the more realistic stuff. The flying and water-walking scenes are handled as well as is possible though, so I did enjoy them. Plus, there are some awesome conventional fight scenes, as when one of the assassins humiliates seven elite, royal guards without unsheathing his spear.

4) On top of the fight scenes, there are great battle scenes featuring the kings army launching enormous, dense flocks of clack arrows at hapless academics and civilians. I liked this because, usually when I watch cinematic battles set before the dominance of black powder firearms–Braveheart for example–I wonder why the big army with all of the archers doesnt just sit back and lob all day. Usually they do a couple of volleys and send in the infantry for competitive, hand to-hand combat, which is an asinine strategy. The Emperor’s army in Hero, in contrast, surrounds the enemy and then fires arrows at them literally for days before moving in to clean up whats left.

When these elements come together, as they do through most of the film, Hero is a great experience, even if not a great film.