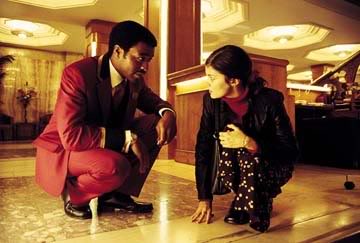 After a summer of torture, depression, and near suicide, I have finally seen a film that begs to be seen by more discriminating viewers who are equally sick to death of the latest action romp. Dirty Pretty Things, the new film from director Stephen Frears, is, in fact, the best film I have seen so far this year. Combining suspense, drama, humor, and social commentary, the film is the first to entertain my brain in many months. I remained involved throughout, as the film moves from one compelling scene to the next, never wasting a shot or our time with pointlessly self-aware dialogue. In fact, I had such a good time at Dirty Pretty Things that it made me more aware than ever of how much time I have been wasting with mindless Hollywood tripe.

In its structure, Dirty Pretty Things is a mystery of sorts — the story of Nigerian immigrant Okwe (Chiwetel Ejiofor) and his work at the front desk of a London hotel. We learn quickly that Okwe has several jobs (cab driver, ad hoc doctor), but it is his hotel work that begins the mystery. Checking a room, he discovers a clogged toilet and the source of that clog is revealed to be a human heart. No one seems overly concerned about either the organ or its missing (and dead) owner, although Okwe is determined to penetrate the puzzle. And we also meet co-worker Senay (Audrey Tautou of Amelie fame), a Turkish immigrant who lets Okwe sleep over at her apartment while she is at work. Their arrangement is a violation of her immigration status, as she is not allowed to share her dwelling with anyone else. Still, these two have an arrangement that is mandated by their precarious positions in the London underground. Also at the hotel is the sleazy “entrepreneur” Sneaky (Sergi Lopez), another immigrant who seems to running a dangerous business behind the closed doors of the hotel.

One of the genuine surprises of the film is how much care and attention it pays to the supporting characters. Okwe and Senay are clearly the main focus, but Frears allows the others to grow and develop in their own ways. All of them, from fellow immigrants participating in Sneaky’s “business,” to the doorman at the hotel, to Okwe’s friend in a local morgue, to a sassy prostitute, refuse to be mere support and insist on their importance to the larger story. Each character brings not only color and life, but a sense that when the camera is elsewhere, they continue to work, struggle, and converse. They are not in the film merely to add a bit of flavor before shuffling off, but rather they add to an overall theme — that of how immigrant communities in a big city, despised by the authorities and natives alike, are nevertheless necessary to the survival of the economy. Few films show us the daily lives of such immigrants, but Dirty Pretty Things does so in a way that is neither preachy not sanctomonious. There is nothing particularly loathsome about these people, but neither are they saints.

I do not wish to spoil the film for you by revealing the secrets of the “business,” but let it be said that the film has chosen a unique way of discussing the desperate circumstances and difficult choices of illegal immigrants. There are genuine moral choices to be made, and the consequences of each are presented without the reassuring gloss of Hollywood uplift. Jobs are at stake, as are lives, and the film refuses to judge anyone for what might seem to us to be obvious decisions. And from the interactions between the characters to the film’s resolution, I always felt as if everything resulted from the logic of the story rather than artificial impositions by the screenwriter. Some developments might seem far-fetched when we examine them from the comfort of our advantaged positions, but I never felt as if I had to suspend disbelief or wonder why the characters were behaving mechanically.

Again, the strength of this film lies in its structure. It is taut, confident, and edited with precision. We learn what we need to learn and even when the dialogue does not supply us with emotional cues, we can imagine what the characters do not immediately convey. We get enough background and witness enough behavior to feel as if these people have been fleshed out by a filmmaker secure in his understanding of the human condition. And yet, many of the characters are “symbols” of ideas that Frears feels compelled to give us along with his story. Whenever symbolism or metaphorical qualities are mentioned, most people imagine a heavy-handed treatment of some topical issue or celebrity cause, but Frears has selected one of the more important — and complex — issues of our day, again without the slightest sense of superiority. Outside of a great quote from Okwe about the hidden underclass, there are no soapbox speeches, nor does the film screech to a halt in order for the political axes to grind away. Instead, the politics are seamlessly woven into the story itself, demonstrating that the most powerful statements are often made just by showing us reality as a process. Following around these people as they perform their thankless tasks is enough; we don’t need lectures and Frears refuses to give them to us.

In all, Dirty Pretty Things made me laugh, made me think, and managed to outrage and entertain me all at the same time. Given the crap that passes for cinema in this age of the blockbuster, I had forgotten that films could be this good without the gimmickry that threatens to turn a beloved art form into a depressing extension of video games and comic books. There are jolts and shocks in Dirty Pretty Things — as well as bizarre turns of events — but it refuses to be defined by them, insisting instead on a very human story that always remains plausible despite circumstances most of us could never understand. Thankfully, Frears has remembered that it is no crime to leave the brain running while we enjoy the ride.