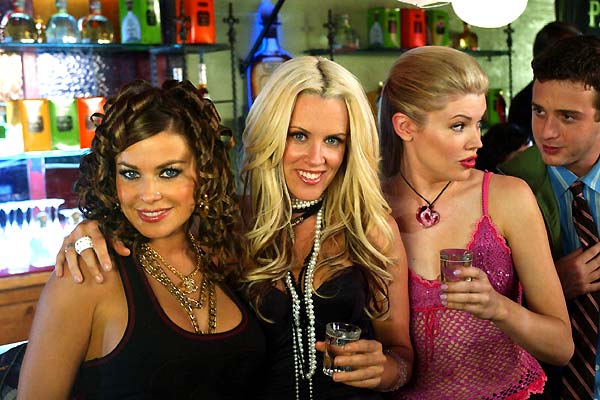 Is it possible to describe the experience of watching a film written by Jenny McCarthy?

Imagine an evening of several degrees below zero. Sleet falls with unnatural force, and the wind is so brisk as to stifle all other sound. You are naked, covered in boils, and the only sensation you feel is that of a slow-moving concertina-wire working its way across your scrotum. The first cut, while quick, is brutally deep, and the night air is punctured just slightly by the distant sound of your testicles falling helplessly to the ground. Then, with a sudden jolt, a bus load of slightly retarded, heretofore chained and starved midgets, descend upon your bleeding shell. They are released, cocks at the ready, and proceed to nibble away that which isnt being stroked, rubbed, and viciously penetrated by defiant, scabbed-over nubs. Left for dead, you at last drift away to the undiscovered country, but not before being surrounded by the same, now sated wee ones, forced to endure a lengthy, ritualized chant, and made to drown beneath unending streams of bitter urine. Peace at last, the DVD is ejected.

Is it really that bad? Need I remind you of what the Shithouse hath wrought?

Call me on the carpet if you wish, but this is without doubt the worst film ever rented at a McDonalds establishment. The studio responsible should be firebombed, cleared away, and erased from history in a Stalinesque purge. The director should be followed for three weeks, wrestled to the ground in front of his family, and riddled with enough bullets to render him indistinguishable from ground beef. The best boys, key grips, and sound technicians should all be stripped, sliced, punched, and roasted over open flames before cheering crowds. And Jenny McCarthy herself — a woman no one asked to make a comeback — deserves a raping and bludgeoning so severe that investigators on the scene will be forced to conclude that Sharon Tate had it easy. The film, when not unendurable, unwatchable, and infuriatingly insipid, challenges all existing moral structures and philosophical frameworks regarding mans ability to withstand torture. Its an eternity of evisceration; a lifetime of backbreaking labor; a weekend with the in-laws. Had my cock been jammed full of glass rods and smashed beneath acid-soaked hammers, my pain would not have been as severe.

What on earth was it about?

McCarthy is Rebecca, a pathetic tramp of a woman who catches the love of her life in bed with another chick, which turns her into a screaming, hysterical whore bent on sleeping with anyone she can find. Call it her memoir. She wants revenge and doesnt care how she gets it. Within five minutes of being dumped, she offers her ass to passing strangers and crawls to a psychic for direction. Finding no comfort, she escapes to a fashion show, agrees to go out with a nerd channeling Woody Allen, and watches in horror as the man vomits on her tits. Weeping further, she pulls out her jugs, flops them around the lobby, and screams, Theyre just lumps of fat! She then runs away and proceeds to sleep for three days.

Bullshit. You made that up, right?Nope, and be thankful that youre getting an inside look at McCarthys mind. Her character then agrees to date a swarthy Greek-looking guy who is into freaky shit, so this means that she must catch him leaning over in the nude with a fish up his ass, screaming, Kiss my bass! Kiss my bass! The next day, she runs out of tampons and flees to the store, finding only extra, extra large maxi pads. She sprints around the store dripping blood, and finally settles in an aisle with the pads, where she is surrounded by a pool of blood and assorted clots. An old woman even slips on the mess for good measure. Oh yeah, and the whole thing is set to upbeat rhythms that you can dance to.

And what about co-star Carmen Electra? Do we at least see her tits?

Not really, but Carmens comic stylings are on full display as she channels every stereotypical black woman mannerism in the book. She also proves shes ready for Shakespeare in the park by playing a dual role, the other being the new girlfriend of Rebeccas ex-boyfriend. Needless to say, shes outclassed, outgunned, and outperformed by her own silicone.

Does Rebecca keep dating and/or fucking?

She has a disastrous dinner with a magician, which leads to the scene where he tries to pull the tablecloth away without spilling food on her and, uh, like spills all the food on her. On the drive home, they are arrested for reckless driving and hiding dynamite in the trunk; which leads to the scene where the lesbian cop forces the pair to submit to a cavity search; which is predictably followed by the part where yard after yard of handkerchiefs are pulled from the magicians ass. McCarthy is also humiliated, of course, because shes still wearing the giant maxi pad.

Is there an obligatory musical interlude?

For no apparent reason save McCarthys unending coke binges transferred to the page, a rock band appears and plays for at least five full minutes. At last, McCarthy runs on stage, flops around like a dying fish, humps the guitarist, makes out with the drummer, and screams like shes being sliced open by an abortionist.

What about the conclusion? Doesnt it get all serious and shit?

Asking, Why does love have to be so cruel?, McCarthy finally recognizes that her nerdy friend is the love of her life, and she wants to spend the rest of her life with him. Given that only minutes before, McCarthy was telling a one night stand not to treat her clit like chewing gum, this is a tonal shift no less jarring than had the third act of The Godfather produced break-dancing clowns and a resurrected Don Corelone masturbating into a tub of mussels marinara. The pair even kiss in the middle of the road as fireworks shoot off overhead. Its love I tell ya, and meanwhile, I can be found face down in my own excrement. Where I belong.