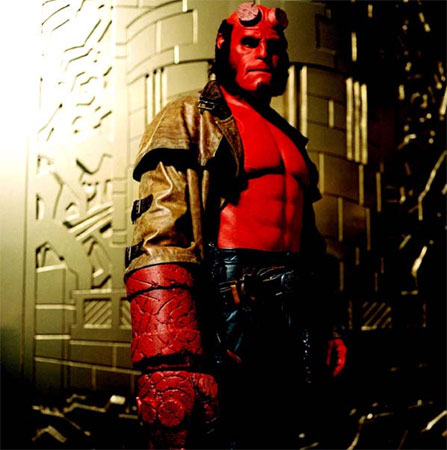 Based on the comic books by Mike Mignola

Again, Jonny is all disappointed…

Hellboy…
Not a good movie. It sucks, too, because it really did look good in the
previews. Once in a while this happens; a movie shoots its wad via the
trailer. Showing you all the really good parts, because there is no
story or anything else that compelling to speak of. Hellboy, like the recent failure, The League of Extraordinary Gentlemen,
is based on a “graphic novel.” The term “graphic novel” is geek-speak
for a comic book where the superheros don’t where spandex body
suits-still just a comic book. Now, I am not saying that Hellboy was anywhere near as miserable as The League of Extraordinary Gentlemen,
cause very few movies are. But, it still sucked, was basically
pointless and once again I left the theater realizing that far too many
films these days use special effects as a substitute for story and/or
character. 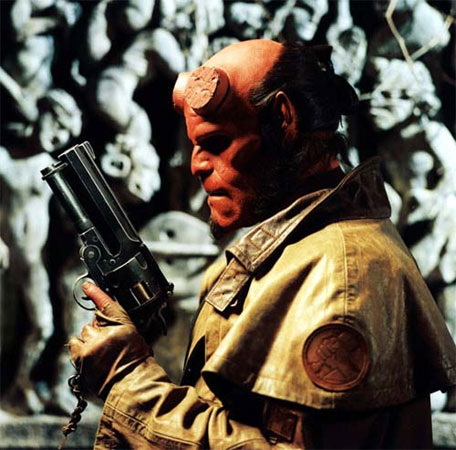 You could tell Hellboy was bound to be a stink-fest within the first five minutes. Turns out that the bad guy is Rasputin.
Yeah, that Rasputin. The “mad monk” who could control the Romanov’s
hemophilia through magical mysticism, or probably the actual truth
which is that he had a 13-inch cock and the tsarina just couldn’t get
enough. Anyway, here in Hellboy the Siberian charlatan is in
cahoots with the Nazis and trying to open the gates of hell. Totally
dumb. I’m sure the author of the “graphic novel” had heard mention of
Rasputin when he awoke from a nap in third period, but to make him an
immortal demon trying to destroy the world… just naïve from the get
go. Maybe in the sequel the bad guy will be Nostradamus! Or better yet,
Jepp, the sinister yet prognostic pet-dwarf of legendary Danish astronomer Tycho Brahe. Actually, that would be really fucking cool. As we have it here in Hellboy, Rasputin isn’t very cool at all. In truth, he’s rather dull. (There is sure to be a sequel now that Hellboy has unseated Scooby Doo II as the number one movie in our silly country… seriously, The Passion of the Christ, then Dawn of the Dead, Scooby Doo Dos and now Hellboy. I’m sure sociologists are having a field day.)

So much is wrong with Hellboy, it is hard to pick it all
apart. Ron Pearlman did a fine job as the principle, and he looked
really good, but everyone else was just terrible. Espcially that Escape From the Blue Lagoon fish/man thing. Oh, and the Nazi chick was particularly terrible. OK, John Hurt was so-so, but so what? I mean when Hellboy
and his gang of dorks has to stop Rasputin and his evil undead Nazi
friends… well, there is just no hope. Aside from the stupid story,
the editing was pretty sub par. Lots of choppy cuts that you know were
the result of some studio suit sitting in on the process and offering
his/her worthless two cents. Not that the director’s vision was
betrayed or anything like that, it was just sloppy. The monsters were
about the least scary beasts I’ve seen in a long time. They look liked
doodles off the back of a Peechee folder. Oh wait, they most likely were scratches on the back of a manila folder. Seriously, they looked like giant dogs crossed with the aliens from Alien
and then doused with toxic waste. Lame. And the really cool part where
Hellboy rips one of their jaws wide open was in the preview. And the
giant hell beast at the end might be the lamest movie monster of all
time. Oh yeah, so get this kids, hell is actually a dim sunset
populated with super giant octopus which are really, really evil and
want to come and wreck the earth cause they are so mean. Luckily, in
the world’s shortest climax fight scene, Hellboy kills the Satan-thing
with some grenades. 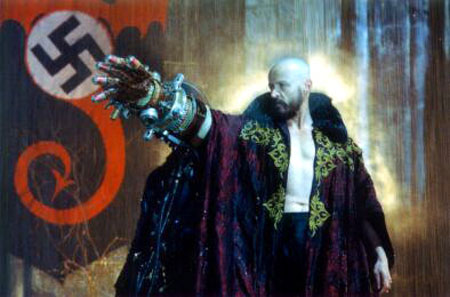 Look out, its Rasputin!!

There was only one good part. See, Hellboy is in love with Liz Sherman (Selma Blair), some X-Men
wanna be who can start fires with her hands. But, because Hellboy is
property of the FBI, he has to sneak out all the time and go visit her
in the mental home she lives in. But, Hellboy’s new handler, Dr. Tom
Manning (played by Jeffrey Tambor in one of the most lifeless
performances I have ever seen), totally has a boner for Liz. And, he
can go and visit her or whatever without the potential of getting in
trouble, because he is a pasty-faced little white fuck and not some
bright red devil. So, Hellboy follows Manning and Liz around and right
before Dr. Tom is able to bust a move, Hellboy hits him in the head
with a rock. I liked that part. Which is nuts considering the movie is
a supernatural action adventure flick with Nazis and Russians and
Mutants and Satans and all this shit, yet the best part is one guy
throwing a rock at another guy’s head! Sigh… The rest of the parts
are basically all bad. One of the scenes is a total rip-off of The Relic. The rest is just wannabe X-Men crap and more than a little Indiana Jones-ish. Hey, they are fighting the Nazis! Anyhow, Hellboy? Just skip it.