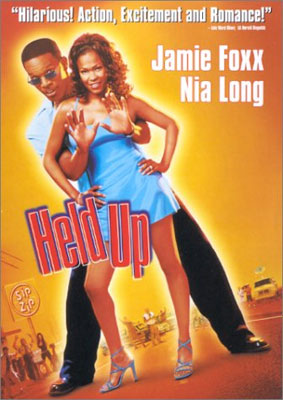 Michael Dawson (Jamie Foxx) and his girlfriend Rae (Nia Long) are driving
through “North Butt” Nevada, a tiny, backward desert town and they’re getting ready to ready to break up when they make an ill-fated stop at a remote convenience mart.

After a heated argument, Rae hitches a ride with some tobbaco-chewing
cowboys, intending to leave Michael forever. One second later, his car is
stolen and Mexican desperados hold up the convenient store. Beaumont, the
local deputy is clued in, and calls for help. This being “North Butt,” all the
locals show up with their shotguns along with the police, forcing the
inception of a hostage situation. Mistaken for either Puff Daddy or Mike Tyson by the locals, Michael is shot at repeatedly even though he is a hostage. (The silent premise here is that these people have never seen a black man in their lives, and automatically presume him to be the criminal.) In fact, even after it is known he’s a hostage, the locals still take a few shots at him when they get a chance. After all, to them, this is Puff Daddy or Mike Tyson. At one point, during an unexpected and unprovoked hail of bullets, a Dorito is somehow lodged in Michael’s face. For him, it is not a good day. His greatest luck is in that the SWAT team cannot find “North Butt” for a long time.

As the standoff goes on, Michael’s light-hearted and funny personality
creates a cohesion between the hostages and their captors. They all spend the day getting to be friends and eating the convenient store’s food. Occasionally Foxx and his captors try to negotiate demands with the police, who are angry at having to miss a baseball game. (Foxx wants his girlfriend back, and his demands are only considered because he is thought to be Mike Tyson.) Jamie Foxx is one of the only actors who could’ve made this semi-believable. He is, for lack of a better word “endearing” as this character in a unique respect.Given the potential emptiness of this story, Foxx’s acting plays the largest role in making this film viewable. I must also credit all the other members of the cast. All of them did well in this, or else it would’ve been the most boring movie ever made. The story is minimal. So, the entertainment is all in watching the interactions of the film’s characters during one long, slow day in which little really happens. I also really liked John Cullum as the owner of the convenient store. He played off of Foxx well and it was funny.

As I have suggested, this film is slow, but it has to be in order to allow
for such seemingly improvised and comfortable interplay between the
characters. So, that’s OK. If you’re into it, it’s fun. Otherwise, one
probably wouldn’t mind falling asleep during this movie. I’m sure the
screen-writers realized this, and chose to work with the more positive
elements of the film that I’ve mentioned. In this, I cannot condemn them. They must also know they were lucky to get a cast who could pull this off. It’s not the best movie ever made, but it’s semi-successful as a sort of experimental thing, not that it hasn’t been done before. (See Dog Day Afternoon. Imagine it as a comedy.) It would’ve been better as a comedy. In fact, “held up” is better all around. But … Now, in whatever century this is, it could never have any semblance of Dog Day’s impact, in whatever year that was released.

The filming and the direction are OK too. Though no special challenges
were presented in this respect, I liked the way the film was shot.
Musically, two things deserve mention: John Cullum’s constant playing of
“Beautiful Dreamer” on the harmonica is very nice. Also, I’ll always laugh
from now on, every time I hear “Tie A Yellow Ribbon.