The Hebrew Hammer flat out sucks. It fails as a comedy, a spoof and an action flick. It falls into the same “one joke, eighty minutes” category with such failed comedies as Zoolander, The Ladies Man and Cobra.
Plus, it was downright insulting without being funny. Worse still, it
was incredibly lazy. I’m actually baffled at just how lazy The Hebrew Hammer
is. Again, the idea behind the film is pretty damn funny, but director
Jonathan Kesselman ran out of gas after twenty minutes. That meant 60
minutes of rehashed Jew jokes and black jokes. And by rehashed, I mean
the idiot next to you at the bar told you the same joke ten
minutes/years ago. 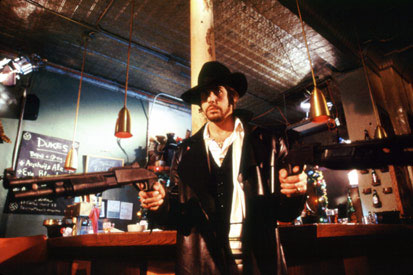 I remember one time I saw the trailer for a short film called Being Ron Jeremy. It was a spoof on Being John Malkovich where you entered a hole in a wall and became the Hedgehog. The trailer was funny. A very clever idea. As a two minute trailer! The actual 40 minute film? A bit overlong, but there were a few really funny parts. (Like when Ron’s dad says, “Double Anal is not gay.”) Could The Hebrew Hammer have been saved if its length were cut in half (or brised, as the film had to make light of)? Doubtful. Hammer is pretty much a stinker. From five mintues in, you realize that Hammer
is doing nothing more than relying on the initial gag to carry the
film. Also, it seemed that when a scene ran out of gas, Kesselman would
simply toss out a word like “bagel” or “goy” or show a Star of David on
a motorcycle and we were supposed to buy it as humor and/or cultural
insight. Lazy.

Adam Goldberg, who excels at playing annoying Jewish guys (see Saving Private Ryan
where he stars as “The Jew,” the foil to Vin Diesel’s “The Wop”) stars
as Mordechai Jefferson Carver aka the Hebrew Hammer. Think a Jewish Shaft.
Pretty funny. In fact, the idea of an ass-kicking, jive-talking
Hassidic guy, would have made a pretty good five minute skit on Saturday Night Live. Only in The Hebrew Hammer you just get beaten to death with the schtick. Think about Disco Stu
having his own movie. Actually, that might be funny. Here though,
Goldberg gets Hammer into what could be potentially hysterical
situations, and then just neurotically chews through scenery with every
stereotype imaginable (Jewish or otherwise-at one point he instructs
Mario van Peebles not to eat watermelon). For instance, Hammer walks
into a Nazi bar and orders a Manishevitz. Funny! I’ll admit, that was a
funny idea. But then the Hammer just pulls a gun and the next scene is
him walking out of the bar. Lazy. 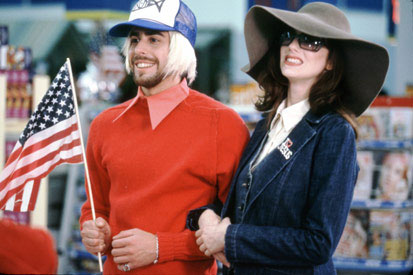 I’m going to be lazy here in my review, cause honestly I saw
this a few days ago, hated it, and haven’t thought about it since. I
just remember at the time thinking what a pile the movie was from top
to bottom. The plot has something to do with an atomic Jew clock
somewhere in Israel that Santa’s son (Andy Dick) is trying to
destroy… I mean, did you see what I just wrote? While a nine-year-old
might be able to buy that premise, he/she wouldn’t understand. Me? I
understand that Kesselman is a lazy motherfucking writer who blew a
golden opportunity to make a good movie. Or even a passable one. What a
putz.