Turkey keeps pumping them out. And Color me impressed. Matt Cale does this often, and at the risk of stealing too much from him, I will announce that the #1 contender for tops on my end of the year best list is Gegen die Wand (Head On). Most remarkably, I felt this way about an hour into a nearly two-hour film. Writer slash director Fatih Akin is a powerful filmmaker at the top of his game. And he’s only thirty-two. Rare is it that I find myself not only laughing and crying during a film, but rewinding it while watching it for the first time in order to re-catch a particularly excellent scene. The last movie where I did that was Herzog’s insurmountable Little Dieter Needs To Fly — my vote for best movie ever made. So, Head On treads in some rarified waters — at least in my book. And that’s why youre here — to see what chapter pops up next (Yes, I’ve been drinking. Sue me). And I must mention, like Herzog films, Head On makes intelligent, articulate and welcomed use of music. You get the impression that the writier of the film actually scored it and chose the soundtrack, not some asshole who is trying to break the next big and pathetic thing. This is no stupid music video showcasing whoever the latest Blink 182 rip-off is; this is a mature display of a great aesthetic sense and sensibility. Finally, some taste is on display; some sophistication. Thank the fuck Christ yes! 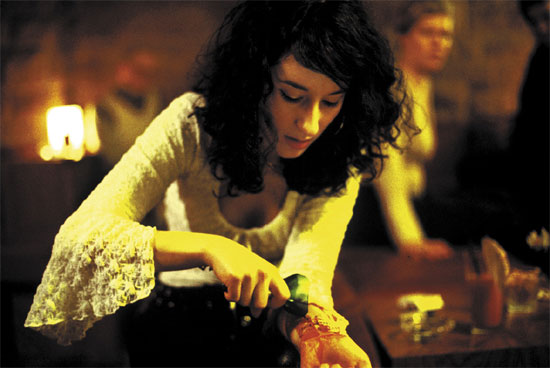 Head On is concerned with the lives of Cahit (Birol Ünel) and Sibel (the impossibly cute, sexy and desirable Sibel Kekilli), two Tukish-Germans who meet up at a suicide rehab clinic in contemporary Hamburg. A misanthrope of Caleian proportions, Cahit is exactly the person I would be if I weren’t such a nice guy. Needless to type, I aspire to be like him. Drunk, mean, insane and way the fuck punk rock, Cahit leads the life that I can only dream of. While there are tons of places in Los Angeles to go and get drunk off your ass, most of them suck. Cahit haunts the types of watering-holes that I reminisce about — the type found in only danker, darker locals like New York and, well, San Francisco. The types of places where men go to be left alone and to become inebriated. Modern Los Angeles has seen all of its former Bukowski stomping grounds overrun by subscribers to Vice Magazine (a free publication I should point out). Sure, they’re packed to the nines with drunk skanks who’ll take it rectally for a bump off your car-keys, but honestly I yearn for the peace and quiet of the dinge. The kind of place where everyone knows your name; and your name is Asshole. This is where Cahit lives, until he gets so drunk that he drives his
beater station wagon at full speed into a wall. Head on, so to speak.

The first time he meets Sibel, she asks him to marry her. He balks and walks off. She’s in hospital because she’s slit both her
wrists open. The second time they meet, she again asks Cahit to marry her. He explains that he only fucks men. Only he’s not gay; just sour
as hell. See, it turns out that like Cahit, Sibel is Turkish. Not only that, but she still lives at home with her impossibly traditional
father and brother. Her mother is there, too, but, well, the mom is making an attempt at least to be more modern; more German. Sibel knows
that short of death, the only way to escape her family is to marry. And she (of course) can only marry another Turk. After much drunken
soul-searching Cahit relents and agrees to wed the tragic Sibel. Why? Well, why not. He has nothing, save for sleeping nude on his couch
amongst one of the more impressively filthy apartments ever captured on film. Plus, it’s a good deal; she’ll pay half the rent, do his dishes,
cook, clean the joint and scrub the toilet. I mean honestly, what more could a man want? Oh yeah, her. I should mention — for I feel it bares
some relevance — that Sibel Kekilli the actress caused quite a stir in Germany when this film came out for in her past life she was a porn
star. See here. Point being, Sibel is hot. And Cahit, well, he is a man, only a man. 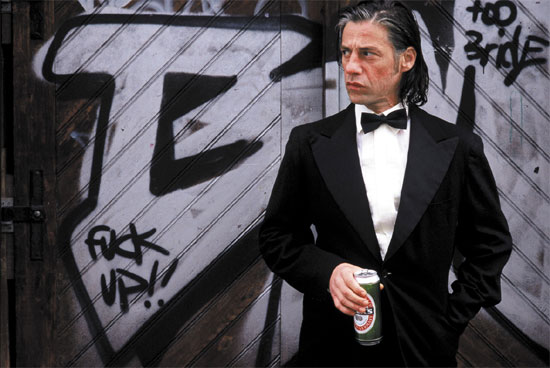 And the plot continues and rest assured it is awesome and satisfying in the way that great cinema is. Scene after scene after ‘fuck yeah! that was fantastic’ scene play out and I could discuss and dissect most if not all of them (Head On features both the most gratuitous and loving sex-scenes filmed in modern times. Sweet boobies bound like wallpaper, too). But how about instead I just implore you to go out of your way, track down and watch this very special film? Not good enough? OK, I’ll reveal a bit more. So, the two of them get married, but only because Sibel smashes a bottle in a bar and slashes her wrist open — again — after Cihat tells her “no way.” He feels bad and somewhat responsible for her. He conspires with a coworker to convince her impossibly stuffy family that not only is he a
good Turk, but a successful one, to boot. In reality, Cahit picks up half-empty beer bottles after concerts for rent. At the wedding (which is a brutally wonderful segment of an already impressive film), as is Turkish tradition, the bride and the groom take their meal in private. Rather than food, Cahit starts doing lines. Sibel, probably mostly out of rebellion, follows suit. Yeah, so, what Head On does so tremendously well is express the zeitgeist of what is means to be Turkish and German. What it means to be caught at the intersection of two fairly-radically different ways of being. And it does it in a non-easy, non-American way. And what I mean by that is, there is nothing abject. No German-German ever slights them for their Turkishness. In fact, the only time “fucking Turks” is ever uttered is by Cahil himself. For you see, Head On is much smarter than almost all other films. Their otherness is expressed through and only through them. No easy metaphors are offered and none could be accepted. Maybe it is my own reality — being a Jew in America and not being sure what comes first and being massively turned off by my own tradition –but rarely have I connected with two characters like I have with these two walking indictments of, well, everything. To top it off, he’s an iconoclastic punk who takes a pellet gun to their wedding photo. I’ve said too much… 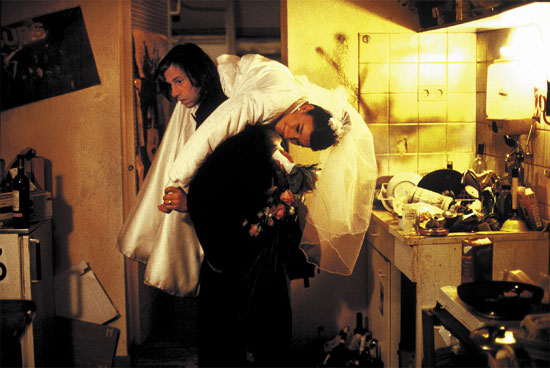 Friends — I implore you — support legitimate cinema. Take Batman Starts Up Again off your queue and check this shit out. While far-fetched (possibly) in its extremities for dramatic purposes, you will rarely see a film with gravitas as heavy and as poignant as this one. Badass, too. Trust me; when Sibel is telling three dudes from Istanbul to go and fuck their families, well, it doesn’t get much more insane than that. Oh, and this is ten minutes after she’s been raped by an opium-dealing bartender. Damn! I keep giving it all away. Premiere cinematography is coupled with first rate direction and acting to create what is without doubt one of the finest films of the decade. I look foreword to future work from all involved. And if you can point to a hotter thirty-nine year old than Catrin Striebeck, I’d very much like to meat her. Yes, I said meat her. Beer’s almost gone; please heed what I write anyhow. I’ve said far too little about how great the performances are )Cahit tosses her on their wedding night, and not only do you believe it, but you feel for them…unheard of), how compelling the story is and how essentially satisfying the film is as a whole. Trust me, please — Head on — you’ll love it.