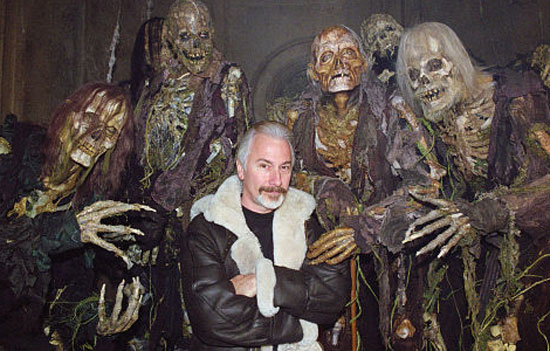 When I first heard they were making The Haunted Mansion into a movie, I was horrified. Not surprised necessarily, but horrified all the same.

This movie is a perfect example of what I like to call, “The Hollywood
Regurgitron”. The same ideas, barfed up over and over again, slopped
onto different plates, and shoved down your throat with a little parsley
on top.

Until recent years, the most prolific vomit has come by way of
television, which busily spins the thinnest of concepts into
franchises. Saturday Night Live is a big offender, pushing out such dry
turds as The Coneheads, Ladies Man and A Night at the Roxbury. But then
the vomit wagon came full circle, and movie producers turned television
shows like The Brady Bunch and Starsky & Hutch into film.

Now however, we have reached a new low. Anything at Disneyland can be a
movie.

It started, of course, with Pirates of the Caribbean, which did well.
Buoyed by their success, Disney launched headlong into this new genre,
and we can expect to see Restroom, The Movie shortly. This will be
followed by The Incredible Churro Cart, and Shit, I left My Purse on
the Teacups.

The very first thing you see when this movie starts is a title card that
read, Beware Foolish Mortals. I couldn’t have said it better myself.

The opening credit sequence could be the most interesting part of the
film, particularly since Eddie Murphy isn’t in it. It’s all shot in the
mansion during a masquerade party, giving it an Eyes Wide Shut sort of
feel. That gave me a little hope, since I thought there might be some
sort of kinky sex scene coming. Unfortunately, we settle into something
more disturbing; an Eddie Murphy movie worse than Pluto Nash.

Eddie Murphy plays himself again in this film, only this time he’s
calling himself Jim Evers. Jim is a hungry real estate salesman, and
like Mr. Murphy himself, he takes on all the wrong projects just for the
money.

After missing his anniversary, he takes his wife and kids on a trip to
the lake to make it up to them. But first, they have to make a “20 minute
stop” to see an old house he’s been asked to list. 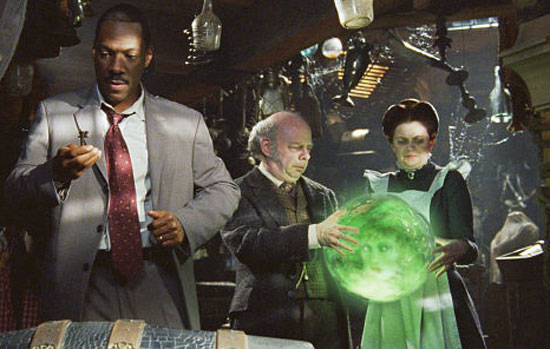 Of course, we’re all shocked when the locked gate opens by itself, and
the creepy butler pressures them into staying for dinner. Equally
shocking is the sudden storm that floods the roads, forcing the family
to stay for the night. Man. Didn’t see that coming.

It was at this point that I officially checked out of the film. Not so
much because it was boring and not funny, but there were continuity
problems that distracted me from hating the movie on its own merits.

I was brought back into the action when Eddie Murphy accidentally tips
the head of a bust in the study, opening a secret passage. He walks
into the room and the doors slam behind him, locking him in (though
unfortunately, not for the remainder of the film).

This begins the most annoying part of the film for me; Mr. Murphy’s
scary trek through the Haunted Mansion. This sequence was obviously
shot inside the ride, so we’re treated the same landscape we’ve seen
a million times. I half expected to see fat tourists in Bermuda
shorts, eating carnation ice cream bars in Mickey Mouse hats. 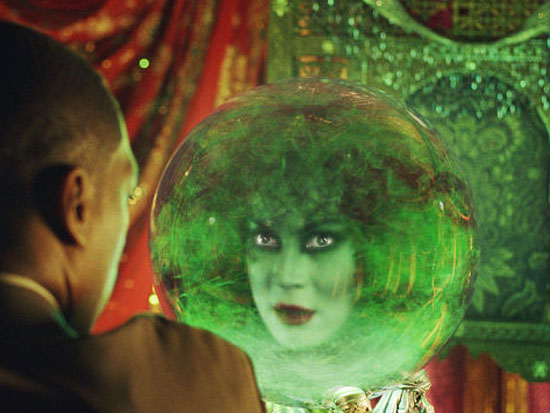 At one point, he runs into Jennifer Tilly as Madam Leota, looking a lot
like Tim Curry in Rocky Horror. She sets the room spinning, and
suspends him in the air. As he grips the chair and attempts to look
frightened, she intones, “You must first gain new sight”. Eddie replies,
“I must first gain new underwear”. Laugh? I thought I’d never start.

When he gets out of the room, he wanders the hallways looking for the
plot. At one point, he looks in a mirror, and sees a dead man. I’m sure
that’s what his agent sees, too.

This goes on like this for what feels like several hours. Eddie has to
fight off corpses to find a key to unlock the mystery of the house,
which is not such a big mystery really, since the entire thing is played
out in the opening credit sequence.

I can’t tell you much more, because I too was led on a strange journey
in my house. I found myself sitting in another room, eating low-carb
ice cream and smoking a cigarette. 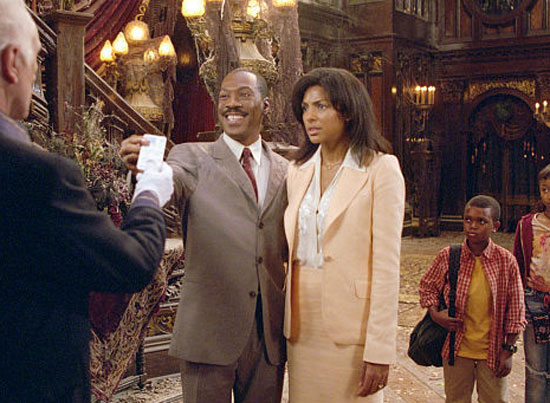 Perhaps the most telling moment in the film came as Eddie Murphy’s young
son tried to persuade him to help the ghosts out.

Regardless if the above applies to Murphy or Disney, truer words were never spoken.

For more embarrasing photos of April Winchell, check out her site — http://www.aprilwinchell.com/