Rarely have I seen such an inept film, one that fails on every level. I’m going to keep this quick, because The Phantom
really doesn’t deserve much ink. Me and my girl just got 7,000
different digital HBOs and it was early on a Saturday morning and I
turned the fucking movie off about fifteen minutes before it ended,
cause I really could not take any more. I just wanted to let you all
know that they are doing construction directly above our bedroom and I
couldn’t go back to sleep or read or anything. And the crapulence
emanating from the screen paralyzed my body, so I couldn’t change the
channel or nothing. There, that’s my excuse for watching The Phantom.

Anyhow, I think the story goes like this. The Phantom, lamely played by pre-Titanic
Billy Zane has to stop a bad guy from getting some skulls. Why is Zane
lame? Because unlike Treat “The Bad Guy” Williams (who is the only
semi-redeeming bright spot of this bad film), Zane is too thick to
realize that The Phantom is a sad, throw-away, half-hearted attempt by some studio schmucks trying to dig into the goldmine of comic book adaptations.
So, Zane plays all earnest and serious as literally the dumbest
superhero ever dreamed up. The Phantom lives in the jungles of Bora
Bora, wears a purple jumpsuit, has a pistol and rides a horse. That’s
it. Oh, and he speaks perfect English, and is white or whatever the
hell ethnicity Zane is. I think he talks to his dead father a few
times. Point is, the script that spawned The Phantom is one of the few written works which could actually be improved by campiness. 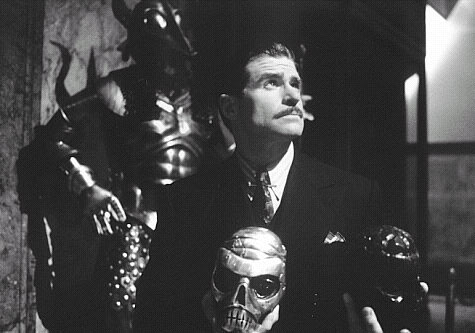 I don’t know what else to tell you. It was like watching Raiders of the Lost Ark for Dummies.
The movie is rated PG, so even though I think at least 90 dozen bullets
get fired in every scene, no one ever gets shot. Also, there is a
massive sword fight at the end, but instead of actually cutting and
slashing anyone up ala Joseph Parker, the characters in The Phantom
knock their blades together a few times and then bash their adversaries
in the heads with the butt of their swords, knocking them out instead
of killing them. The only part I liked was the fact that Kristy
Swanson, the original Buffy, gets billed over Catherine Zeta-Jones, a
fact that Zeta-Jones will never, ever be able to live down. The Phantom is lazy filmmaking at its out and out worst.