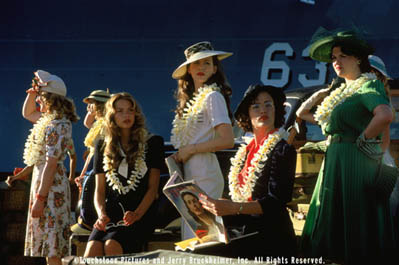 I admit, I watched this movie fully expecting to hate it. I was a little torn actually, because I have always been a history buff and was excited to see the battle scenes and the Japanese angle. What a fucking waste.

The film got made like this; a Hollywood fuckhead offered a $100 million budget to anyone who could combine Saving Private Ryan and Titanic. Enter Michael Bay and Jerry Bruckheimer. The dynamic duo that brought us The Rock, said that they could take one of the nations most sensitive and sacred events and turn it into cash. No problem. This movie was such an atrocity that the only work Michael Bay is getting now, is for Bad Boys 2.

I could probably write a novella pointing out everything that is God-awful about Pearl Harbor. I am going to try to keep it brief, however. Patton, The Bridge on the River Kwai and Saving Private Ryan were good WWII movies because they didnt have any fucking women in them! Kate Beckinsdales nurse character was given more screen time than FDR. The Japanese were portrayed as an inferior race who was saddened by their own unavoidable cruelty. Of course, we have no idea why anything is happening, all we are shown is that Ben Affleck loves to fly! Man, I would have bombed Hawaii too, if I knew Ben Affleck was on the island. Oh, and a big fuck you to Randall Wallace who wrote this pile of shit movie. My Great Uncle was not only a WWII fighter pilot hero who was personally decorated by the King of England twice, but he was shot down by the Nazis over the English Channel. My uncle didnt survive the near freezing waters, and a punk-ass pussy like Ben Affleck sure as hell wouldnt either.

Of course, what is so horrid about this lousy movie is the love story. It goes beyond my realm of comprehension why anybody would try and shove a love story into the center of an attack where nearly 3,000 people died. It would be like if the World Trade Center was attacked during an episode of General Hospital. It is a fucking plot device. Disgraceful. Remember in ninth grade when your math teacher explained that something positive multiplied by something negative equaled a negative? That is Pearl Harbor. I am almost despondent over the fact that more of a national outrage didnt occur. We should have burned down theatres. This film mocks history. It is just terrible. I guess the attack scene was cool, but so what? I was too busy punching my friend in the arm for buying the DVD. He claims it was from some DVD club and only cost him a penny. I told him the real cost was a little chunk of his soul and the dignity of a nation.

There is a History Channel documentary about Pearl Harbor included in the DVD. It is infinitely better than the actual movie.