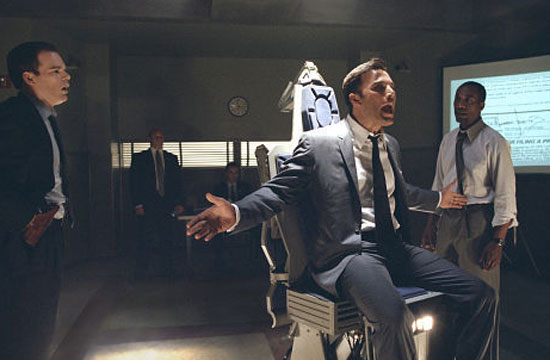 Directed by John Woo
Based on the short-story by Philip K. Dick
Starring
– Ben Affleck as Jennings
– Aaron Eckhart as Rethrick
– Uma Thurman as Rachel
– Paul Giamatti as Shorty

Jonny still has a headache…

Well, I did it. I knowingly and willingly rented a Ben Affleck movie. As soon as I am done, I have to go delouse. He’s one of the few people in the world that I when I see them, all I can think is, “PUNCH HIM IN THE FACE!!!!” Seriously, if Bush and Affleck were standing in front of me, I’d punch Ben. And yes, I understand that Bush does more on a daily basis to destroy the world than Affleck could in a dozen lifetimes; still, my initial reaction would be to sock Affleck. So, I am happy to report that Paycheck is not as bad as Pearl Harbor. There, that’s the nice thing I can say about it. Possibly worse than Affleck (in this one) is John Woo. My, how the titans tumble.

At one point in time not so long ago, John Woo was the most exciting director working in film. I still get goose bumps thinking about Hard-Boiled. These days, though, when I see his name in the “Directed by” column, I know I am in for a stinker. Seriously, since he came to Hollywood he has been pumping out an incredibly steady (and steamy) stream of crap. Seriously, Hard Target, Broken Arrow, Face Off (which was enjoyable, but only because of its insanely high camp/cheese value), Mission Impossible II, Windtalkers and The Hire all are bad movies. They suck, too. Paycheck, while possibly the best of the bunch, is only the best of a very bad bunch. 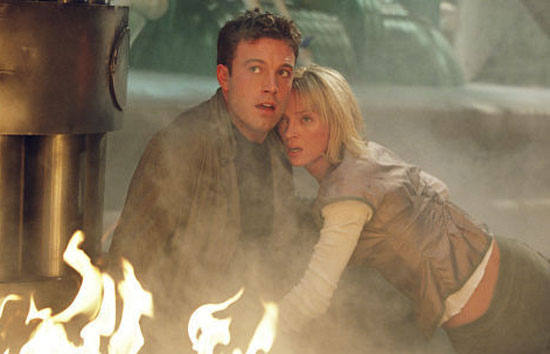 All of Woo’s signature flourishes are present. Two men holding guns in each other’s faces and not shooting, only talking crap; chases involving motorcycles; a dove taking flight, indicating something very positive for the protagonist; bullets, bullets, bullets and more bullets serving every purpose possible except for actually killing people; a smaltzy, sugar-sweet ending that if Philip K. Dick were still alive would upset him greatly. Seriously, the actual ending–not the climax–but the scene in the greenhouse with Ben and Uma and Paul Giamatti (Paul… just do good movies, OK?) laughing and smiling like buffoons might as well of been in My Boss’s Daughter. Yes, the finale was that bad. My friend David and I used to talk about Woo’s fall from grace. We concluded that he just doesn’t translate well into English. There is a cheese ball factor that just doesn’t survive the trip across the Pacific. I mean, even in the aforementioned Hard-Boiled Chow Yun-Fat’s name is “Tequila.” Also not helping Paycheck any is the fact that the only other film screenwriter Dead Georgaris had previously written was Tomb Raider II.

No one else really helps the film out any, either. Uma Thurman is pretty flat, as is the usually dependable Aaron Eckhart. Maybe flat is the wrong word for Eckhart; he’s more like a telegraph that reads, “I’m the bad guy.” Not having read the short-story of Dick’s (also called Paycheck) that Paycheck is based upon, I can only assume the source material is not riddled with plot holes and/or stupid. I’m sure one our nerd fan-boys will write in and give me the low down, as always. In the film however, nothing makes any sense. OK, one of the initial big plot-points is that Affleck is some sort of genius “reverse-engineer” who is gets hired by Eckhart’s evil corporation to steal technology from rivals. Then–get ready for this–Afflech inexplicably has his memory erased. By his best friend.

Paul Giamatti is sitting there literally shooting individual neurons inside Affleck’s head [Ed Note: Paul, next time use real bullets]! In one of my favorite moments of the film, and only my favorite because of how purely stupid it is, an onlooker bumps the computer monitor that Giamatti is working on. The monitor. This of course causes the machine to start acting up and almost turn Affleck into a “vegetable.” I don’t know what it is, but bad science in movies is really starting to get to me. 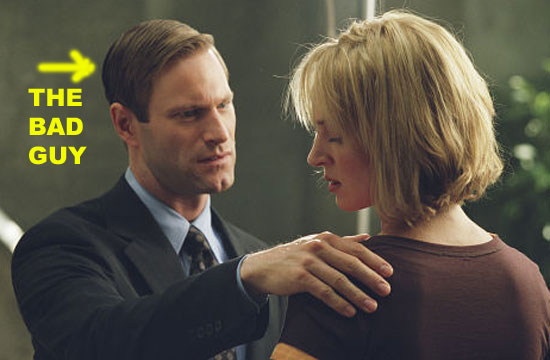 For some fucking unknown and unexplained reason, A) Affleck agrees to have weeks of his life wiped out for cash. B) There exists a reason why he needs to get his memory wiped out. The second one being of much greater importance because the big plot revolves around the fact that Affleck agrees to have three years of his life wiped away for $92 million. Um, where to start? Look picking apart plot holes in a film like Paycheck is literally amateur hour. So, I am going to let a man named “eddy_currents” who I found on IMDB.com tell you about the most glaring one;

(2) now, follow me through this one: (a) he sees the future and knows he has to destroy the machine because it’s bad; (b) he inserts a bug into the works so no one else can use the machine; (c) he sends himself a bunch of stuff to remind himself he has to go back to remove the bug and destroy the machine.

Question: why didn’t he just make the bug destroy the machine in the first place???

“Bleah” is right. OK, so yeah, Ben Affleck invents a machine that can see into the future (stop laughing) and then realizes that it will start a war, so he has to destroy the machine. Now, obviously, a man as shallow as Affleck’s character would have jotted down who wins the next five Super Bowls and moved to Australia to wait out the nuclear holocaust. I seriously doubt that he would have had some massive change of heart where he suddenly decides there is more to life than money. Possibly in the story, this is the role Uma’s character plays, but here in the film, there is zero development, character wise. Affleck is suddenly good, Uma starts good and ends good and only a blind monkey would miss the fact that Eckhart is anything but the bad guy within twelve seconds of him being on screen. And that’s basically the entire film. I guess there are some FBI agents who are onto what the machine does and what Affleck’s role in the whole project is, but they basically stay in the background and have very little effect on the film overall. 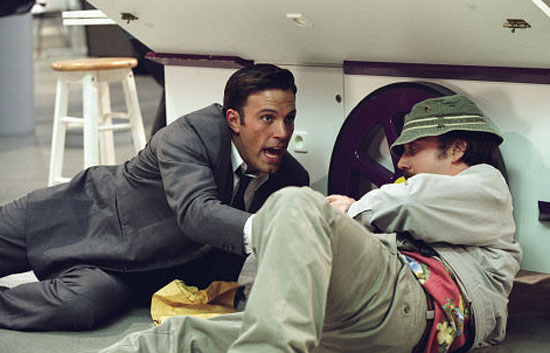 I know I stated above that Paycheck is my favorite out of a list of very bad John Woo movies. I’m now trying to remember why I typed that. I guess I was amused by the little envelope of goodies that Affleck’s character mailed to himself in order to get shit done. However, in light of eddy_currents brutal and accurate attack on the film’s central premise, even that little bit of fun is pointless. As Dick himself explains it;

How much is a key to a bus locker worth? One day it’s worth 25 cents, the next day thousands of dollars. In this story, I got to thinking that there are times in our lives when having a dime to make a phone call spells the difference between life and death. Keys, small change, maybe a theater ticket-how about a parking receipt for a Jaguar? All I had to do was link this idea up with time travel to see how the small and useless, under the wise eyes of a time traveler, might signify a
great deal more. He would know when that dime might save your life. And, back in the past again, he might prefer that dime to any amount of money, no matter how large.

Sounds good, but was something was lacking from the film version of Paycheck. There was one part of the film when Affleck realized that actually knowing the future takes away a man’s future, since life itself is nothing but future choices with unrealized potential. The line Affleck spoke was beautiful and no doubt lifted directly from the source material. An event, that I don’t think occurred very often in the script. So, allow me to take away a bit of your future; if you see Paycheck you will not be pleased.