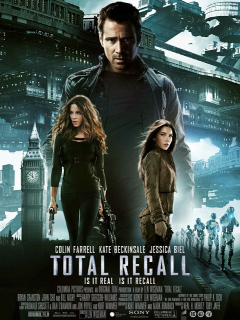 Well, folks, they did it. They remade Total Recall. This remake has been out for nearly a year, but apparently no one on Ruthless Reviews would touch it with Benny’s mutated arm. Thus, the responsibility has fallen to me, the worst reviewer on this fine website, to acknowledge its existence.

Let’s get the differences between this film and the original out in the open. First, there are no scenes that take place on Mars in the remake. This movie takes place entirely on Earth, upon which two human settlements remain: “The United Federation of Britain” in Europe, and “The Colony” in Australia. The two of them are connected by an intercontinental elevator called “The Fall”, which travels through the interior of the Earth. Second, there are no mutants in the remake, with the exception of everyone’s favorite three-breasted prostitute. Third, Richter does not exist in the remake; his character has been subsumed into Lori’s. Fourth, the remake is rated PG-13. Try to contain your excitement, everyone. I know you’re pumped to see this if you haven’t already.

The more astute film fans among us will note that the original script for Total Recall 2 (which eventually morphed into Minority Report) featured Quaid attempting to destroy a space elevator. It’s a nice touch that they resurrected that idea in the remake with The Fall. However, please remember at all times that this movie is a remake of Total Recall, and not a “re-adaptation” of “We Can Remember It For You Wholesale”. It’s an unnecessary film and I felt like I needed a shower after viewing it this second time. Granted, it has been three days since my last one, but whatever.

Anyway, let’s switch to 80’s Action format and just get this over with!

Is it real? Is it Recall?

Shit, bro, is this reality or a dream? *Inception BWARRRRRR*

Quaid encounters the three-breasted hooker and never looks at any of her tits once. Sure, he rebuffed her advances in the original film, but Arnold made sure to take a nice long look at them first. This one scene fully encapsulates everything wrong with this remake. It’s not just that this scene occurs before Quaid even goes to Rekall. It’s that she’s shoehorned in there without the rest of the Martian mutants from the bar scene for color. What is the point of the three-breasted hooker without the midget stripper or the guy with the nerve to show his face? Why even bother? They have some guy getting tattooed, I guess. Very edgy.

The movie is pretty tame in terms of overt homoeroticism, though. Quaid doesn’t look all that happy about sleeping with Kate Beckinsale, but that’s probably because her husband is standing behind the camera the whole time. It’s more sexless and boring than anything else. To wit: the girl of Quaid’s dreams is now white rather than Hispanic. Zzzzz.

The bad guys in this film consist primarily of evil robots. Actually, I’m not sure if robots can be classified as good or evil, but whatever. My point is that, since neither squibs nor CGI blood sprays are seen when they are dispatched, I do not believe that their “deaths” should be added to the Corpse Count tally.

This leaves us with a Corpse Count of 51 confirmed kills. Many of those are not by Quaid’s hand, and I included collateral damage in that rough count as well. All are bloodless, no one gets stabbed in the face or has their arms sliced off, and since this is Total Recall, everything that happens after Quaid goes to Rekall could be a dream. In that case, the actual Corpse Count could be a possible 0. Is it real? Is it Recall? Do you care?

As a standalone PG-13 Hollywood sci-fi action film, it’s pretty good. As a Philip K. Dick adaptation, it’s better than Paycheck and Minority Report, but nowhere near as good as A Scanner Darkly or Blade Runner. As a remake of the Schwarzenegger/Verhoeven classic, it’s an embarrassment.

One of the interesting things about the original film was that the story became increasingly crazy and off-the-wall as it progressed. The mutants, the ancient Martian ruins, and the terraforming of Mars all came up in the second half of the film. Even today, the original movie is interesting to watch due to our uncertainty regarding the reality of its events. Schwarzenegger and Verhoeven famously disagreed about the ending on the commentary track. It’s mind-bending high art and one of the best 80’s Action films ever made. Furthermore, the “Quaid and Melina’s eyes bug out in the Martian atmosphere” scene remains a good barometer for whether or not somebody is worth taking seriously. Whenever I hear someone complain about it, I just pretend they’re Piers Morgan and ignore everything else they have to say.

This remake completely misses the point. As stated previously, the three-breasted prostitute is seen before Quaid goes to Rekall. The idea of an elevator that stretches from the UK to Australia is introduced as a baseline assumption of the reality of Quaid’s world. The maglev highways of the UK are also part of this reality, as they are seen during Quaid’s normal work day. Thus, there really isn’t anything new to bring up once Quaid goes to Rekall. We don’t really question if he is dreaming or in reality because there is nothing truly strange occurring throughout the film other than the implicit statement that Jessica Biel is more attractive than Kate Beckinsale.

But the crew and the special effects team did a great job creating the two different cities seen in this world, Kate Beckinsale walks around in white panties briefly, and the fakeout with the “two weeks” lady made me laugh. So I guess it’s not that bad.

None that I can recall (zing!). Quaid kills Lori at the end, but he does not tell her to consider it a divorce. He just says nothing. Why can we no longer laugh at the deaths of other human beings? Don’t tell me it’s because we’re more civilized than we were 23 years ago. I watched Fox Business Network the other day and holy shit. Cohaagen lives!

Terrorism is a smokescreen used by the ruling class to subjugate the working class. The security state oppresses the common man and ensures the consolidation of capital within the hands of the anointed few. The First World subjugates the Third World, exploiting the labor of the people of the Third World to further their ends. The worker is alienated from the product of his labor and from both his familial and societal life; his existence as a subject, rather than an object, is no longer a constituent part of his being. Prostitutes have three breasts, transcending our Western obsession with duality, yet our protagonist is unable to appreciate them. It is as if they, like him, do not truly exist.

Seriously, though. She has three breasts instead of two. We live in a country with a two-party political system. The prostitute whipping out her three twins (triplets?) is a metaphor for the allure of voting for a third party. Quaid cannot conceive of casting such a vote as the very concept of taking that action is outside the framing of our political discourse. He cannot even look at any of the breasts, much less the third one. It does not exist as an option to him. He is powerless and cannot bring himself to see the truth.

Also, did you know that the PATRIOT Act wasn’t that patriotic? Far out, man.

They attempt to re-enact the infamous Richter elevator death in one scene, but there are three problems: 1) The bad guy is a robot rather than Richter, 2) only one arm is severed, and 3) there is no party, and as such, Quaid cannot sarcastically inform the robot of his attendance. It’s analogous to a scene in an adult film where after 15-20 minutes of buildup, the male performer ejaculates a measly three drops onto a pair of heaving DDD natural breasts. It just makes you wonder what’s wrong with everyone involved, from the people behind the camera, to the people in front of the camera, to the person in front of the screen watching it unfold. How does this stuff even end up on film? Do some kegels next time or something. Sheesh!

The intercontinental elevator explodes, but I was unable to ascertain whether its explosion was atomic in nature. I believe it may have been conventional. I’ve had just about enough of this!

They should have added in one of those bitching dance numbers from Dubstep Up Revolution.

In British English, “Today’s terrorist attacks means that funding will have to go to bolstering our synthetic Federal police force” is a valid sentence.

You need to explicitly request “sleazy” when asked about the girl of your dreams.