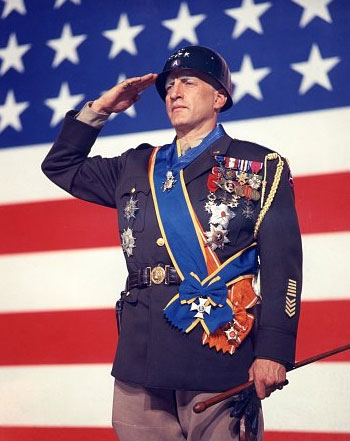 He was a man of war. In fact, without the “sting of battle,” he would have ceased to exist at all. How fitting, then, that George S. Patton, arguably America’s greatest military mind (and certainly one of its most distinctive personalities), would die not long after the end of World War II, for it is impossible to imagine such a man at peace. And while Patton might have romanticized what is at bottom the cruel cessation of life on a mass scale, no one can fault the man for being true to his impulses. He sought glory, individual and otherwise, remained fanatically competitive and egocentric, and lived to bring fear, death, and destruction to his country’s enemies, but he also — perhaps more than any other man of his time — understood the fundamental desire of all men and all nations at all times: victory. Not half-hearted, or with an apology, or through prissy negotiation, but total and absolute conquest. As he says so memorably in the film, “America loves a winner; and will not tolerate a loser.” We all know it, even while striving to play fair. Patton, however, lived it.

Franklin Schaffner’s Patton, perhaps the single greatest biography ever committed to film, understands that any great work — especially that of a historical figure — must cut a man down to his essence. In Patton’s case, that essence was war. As such, Francis Coppola and Edmund North’s magnificent script doesn’t waste any time giving us a cheap romance, or scenes of domesticity, or even a quiet, personal reflection. Patton was a warrior — while awake, in his dreams, and in every interaction with another human being. We cannot imagine him at rest or at leisure because, frankly, we believe that, somehow, when Patton was not on the battlefield he was locked away; kept on ice as it were until the next opportunity for a moment of triumph. The film begins with an American loss of honor (Kasserine Pass), and continues with Patton’s emergence as a man of consequence. It is little doubted that when he comes to “clean up” a rag-tag group of soldiers lacking discipline and leadership, these men will emerge as tough, uncompromising killing machines. And while we’ll say that they fought and died for mom and apple pie, the more honest among us will know that they died for him. And we won’t doubt their sacrifice.

Patton, despite its unapologetic tone of hagiography, is, despite my opposition to war, one of cinema’s grandest achievements and one of my personal favorites. I defend the choice first of all because of the filmmaking brilliance (and performances, which I’ll discuss momentarily), and secondly because this is perhaps the only film about war ever made that lacked a political agenda. Yes, President Nixon watched Patton over and over as a way to rationalize his bombing campaign against Cambodia, but we should no more let Nixon’s misinterpretation ruin this unmatched classic than we should allow Ronald Reagan to steal the guilty pleasure from Rambo. Patton is a presentation — not a critique or a work of propaganda, but simply the story of a man who is inherently interesting and representative of the American character. If we hate Patton, we are forced to admit that we loathe who and what we are, for at bottom Americans live the contradiction of celebrating glory (violent or otherwise) while maintaining an adherence to democratic principles. In the same way that Patton runs into bureaucratic hassles and political controversy (there is no perception or PR on the battlefield, only victory or loss), we too must temper our desires for self-aggrandizement with the restrictions of law and order. 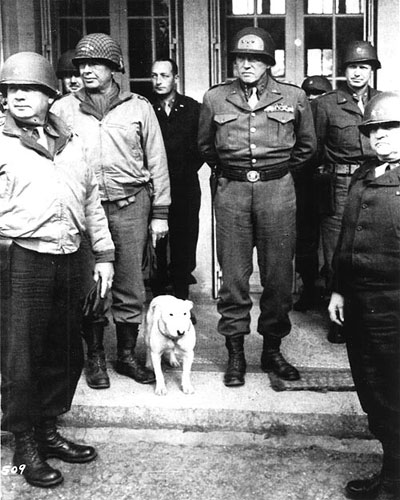 And let us admire Patton’s ability to avoid doing something merely for the sake of appearance. He was uncertain in matters of diplomacy, because he lacked political ambitions. If he despised the Russians, he would tell them so. If he thought a man was a coward and needed to be humiliated into action, he would respond with force. As was said of Theodore Roosevelt, Patton was “pure act,” refusing to second guess his decisions or pretend that niceties solved anything. In Patton’s world, men were either brave or cowardly, reliable or untrustworthy, alive or dead. Such thinking won’t win him any prizes for astute philosophical reasoning, but he never asked to be considered for such honors. Patton will get his men to where they need to be and win the battle, so long as you give him the machinery and stay the hell out of his way. Still, Patton never followed a predictable course. He wrote poetry, believed in reincarnation, and knew that there was no shame in living life as a prima donna, so long as one admitted it.

Now we get to the heart of the film — George C. Scott. I’ve seen hundreds, if not thousands, of films over the years, and I’ve been impressed with just as many performances. But Scott’s Patton, so fully realized, so true to the spirit of the man he has been cast to represent, is simply one the best, if not the best. Again, this is no mere imitation or stunt; this is a living, breathing human being — Patton himself — who only happens to look like an actor. Scott is so convincing and magnetic that I’d sign up for his army regardless of my personal beliefs. And in a movie filled with memorable scenes (there really aren’t any other kind), the famous opening monologue, despite being overly familiar (even to those who haven’t seen the entire film), is and will always remain a powerhouse; a tour de force so brilliantly scripted and acted that the film could end there and remain a classic. I’d quote from the speech, but in order to be fair, I’d have to include the entire thing. Not only is it the best opening scene of a motion picture, it’s one of the best scenes period, for it captures the character (and the film) and uses it as a reference point for everything to follow. If we question Patton’s decisions or his behavior, we only need to remember what he said in the beginning and we understand.

All of the supporting players are wonderful (especially Karl Malden as Omar Bradley) and the battle sequences are masterfully staged, but this is far from an action film. We see the results of war, but we do not linger. We also get snippets of the Nazi military strategy, less to provide balance than to demonstrate how feared Patton really was by a military machine that knew little insecurity. And yes, we get all of the “headlines” — the slapping incident, the profane comments to the press, the answer of “Every goddamn day” to the question “Do you read the Bible?”, and the audacity in asking an army chaplain to pray to God for good weather so that we may kill more of our fellow man (his logic seems right, given the circumstances). But this is no highlight reel. If it all seems one-note, it is as it should be. By turns exciting and funny, Patton is more complex and nuanced than a thousand overtly political films, as it has nothing to prove. If you don’t buy the message, you deny the man and how he lived his life. You may not agree with his single-minded devotion to duty, honor, and war, but damning him does little to understand him. I’ve always believed that it is not at all necessary to like a man in order to find him fascinating. After all, are there hundreds of documentaries about Hitler because filmmakers find him appealing as a human being? Of course not. To understand is not to endorse. But in the case of Patton, at least the man I see in the film, I must admit to an affection of sorts. Had he been my father I would not have survived adolescence, but at least there’s nothing phony about him. He’s one tough S.O.B, consistently so.