Home / Reviews / Movies / OUT OF TIME 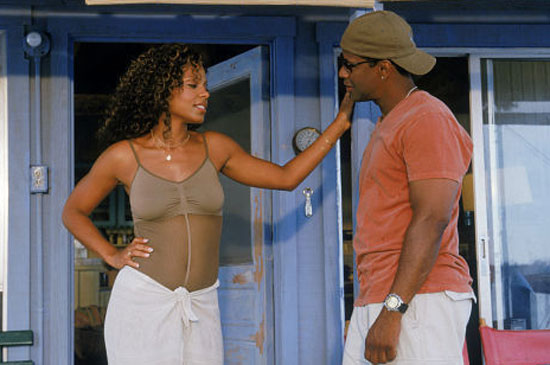 Out of Time showed some promise for its first half,
but then just descended into typical, mindless Hollywood-thriller pulp
for its latter half. Yes, for some reason the hysterical woman has a
gun (yawn) pointed at the man she loves but then the estranged ex-wife
shows up and dusts the hysterical woman. But, I should back up, because
that is the actual climax. I know, I know, youre all going to cry
Wah! Spoilers! but with such a dumb plot, who cares? I mean if me
telling you that Denzel Washington lives at the end spoils anything for
you, youve got much larger problems than Ruthless Reviews. Like, you could have Downs Syndrome or vote for Bush or something. 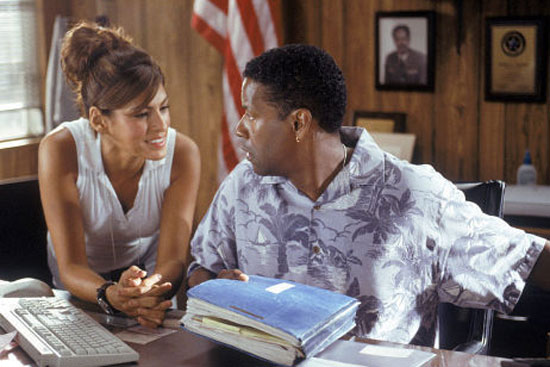 Heres the set up. Inexplicably, Denzel Washington is
romantically involved with the two hottest women in Florida. Ones his
ex-wife, Alex (Eva Mendes), and the other, Ann Merai (Sanaa Lathan), is
his high school sweetheart. These days, hes having an affair with Ann
Merai even though shes married. The guy shes married to happens to
not only be an ex-NFL quarterback, but hes a real cocksucker, too. Now
the town Denzel lives in has 1300 people in it and Im supposed to
believe that there are, not one, but two women who look like that in a
town that size? Sure… Look, women that good looking do not
come from towns of 1300 people. Er, well, if they do, they leave and
head for New York or Los Angeles. Anywho, Denzel is about as subtle
with his philandering as President Bush is with his smirks. That the
whole town doesnt know what is going on between he and Ann Merai is
the biggest mystery in Out of Time.

Denzel has impounded half a million dollars from some big drug
bust he just made. The money is in a safe and not only does Denzel look
at the money from time to time, but his dufus lackey, Chae (John
Billingsley), is constantly trying to get Denzel to steal the money and
then the two of them can move down to Costa Rica together and get a
fishing boat. Even though both of them are married. I need to point out
that I HATE comic relief characters like Chae. I just fucking
hate them. I find them all equally as nauseating as Phillip Seymour
Hoffmans character from Twister.
Useless fucking windbags that have zero analogy to anything that might
one day be misconstrued as real. Anyhow, suddenly Ann Merai comes
down with liver and lung cancer, makes Denzel the sole beneficiary on
her $1,000,000 life insurance policy and starts to talk more seriously
about leaving her abusive husband. Yo, Officer Whitlock! Setup! Get the
fuck out of there!! Hurry! Fucking run! Instead, Denzel gives Ann Merai
the half-million dollars so she can partake in an experimental Swiss
program. Then, her and her husband fake their own deaths and Denzel not
only has to bring both of them to justice, but he has to recover the
money that he stole.

The trouble with the movie, or as I should say, part of the
trouble with the movie is that the stakes are never high enough. There
is this over the top dramatic moment where Denzel is trying to get his
phone number off of the dead peoples phone records. So he intercepts
a fax, scans it into his machine with an OCR reader, opens it in Word,
deletes every instance of his name and number and sends it back to the
fax machine… but, I mean, so what? Um, is this your phone number?
Yes, I was friends with the dead husband. In other words, it is a
thriller for the sake of being a thriller. I mean, the officer he has
to worry about is his ex-wife who is still in love with him. Ooh,
scary! Shes really going throw the book at him. Yeah, lets just leave
it at that. Out of Time is a well made movie that takes itself way too seriously. The viewer is never engaged so much as they are actively waiting for the movie to end.