For me, one of the finest things a film can do is leave you
emotionally drained as the credits roll. In my mind, this is the real
advantage film has over other art forms, the ability to engage all the
senses and do so in a controlled, sustained manner. Granted,
movies can fail, miserably, at all of the above and do so more often
than not. But when a film gets it right, well, then the viewer is lucky
indeed. Harold Becker’s 1979 picture, The Onion Field, is just such a film. Savage in its banality and absurd in its violence, The Onion Field begins its life almost as a film noir caper before settling in and becoming a meditation on crime, justice,
and the legal “profession” in the widest possible scope of the term;
including the lawyers, cops and criminals. But when it ends, you are
left–or at least I was–with the feeling that this movie is more an
acknowledgement of the passage of time than anything else. Needless to
say, it is a fascinating story told in an utterly mature way.

The first thing you need to know is that The Onion Field
is a true story, or at least largely based on one. Two bumbling
criminals, Greg Powell (Jimmy Woods!) and Jimmy Youngblood (Franklyn
Seales), for basically no reason whatsoever (we’ll get to that shortly)
wind up kidnapping two cops, Hettinger (John Savage) and Campbell (Ted
Danson), and then killing one of them (Powell). Now I should back up a
bit. We meet Youngblood the he gets out of prison. He’s a petty thief.
He has the awful luck to run into Powell, who, as Woods so masterfully
portrayed him, is the type of person I spend much of my time trying to
avoid. That type being the all-the-way-live criminally insane. You know
this guy; one minute they’re laughing with you like a damn hyena and
then suddenly they become offended and upset about something minor you
said and then they get violent. I knew a guy almost exactly
like Powell in high school, and he’s now serving a life term for
murder. Powell, for reasons that become clearer as the film rolls
along, decides to get Youngblood into his cockamamy “family.” Poor
Youngblood. 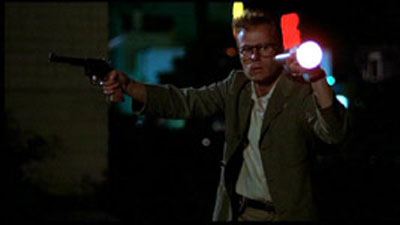 The duo commit a series of amateur crimes (mostly knocking over
liquor stores) and then they get pulled over by Hettinger and Campbell
for looking suspicious. I should mention that Powell had the two of
them dressed up in black leather trench coats and matching
leather-daddy hats so they would look, “taller.” Powell–because he’s
insane–snaps and puts a gun in Campbell’s back. This forces Hettinger
to turn his weapon over to Youngblood. Then the two crooks drive the
two cops from Los Angeles to an onion field in Bakersfield where for
basically no other reason except that he is a mad son-of-a-bitch,
Powell shoots Campbell in the mouth. Hettinger makes a getaway and the
two criminals are eventually caught and arrested. From the film’s
start, it seemed apparent that Danson’s character was in fact the focus
of the film, and with him dead it would seem that the film is over. Not
hardly. I need to say before moving on that this was Danson’s big
screen debut, and he was excellent. As was Woods, but Danson was
surprisingly so. In truth, all four of the main actors were fanstic.
But Danson’s performance really stood out.

In a very reminiscent of Rashomon fashion, we learn that after
getting shot in the face, Campbell was also shot four times in the
chest. By one of the two criminals. To the viewer it is pretty obvious
that Powell did the shooting, but it is never totally clear (I think
Powell did it). Hettinger maintains that it must have been Youngblood
who shot the probably already dead Campbell, since Powell was firing
shots at him as he fled through he field. However, Powell is white and
Youngblood is “half-negro.” In 1963, obviously, the burden of proof
falls to the black man. Both men are found guilty of cop killing and
sentenced to death in the gas chamber at San Quentin. Once there,
Youngblood befriends a fellow death row inmate (a really nifty cameo by
Christopher Lloyd) who explains that he has to stop beating up Powell.
Turns out, that if the two have separate trials, Powell could testify
at Youngblood’s trial and plead the fifth while looking like a
psychopath. That will convince the jury that Powell was in fact the
shooter. This deal is secured via a blowjob in the shower. I’m bogging
you down with minutia. Needless to say, many questions are raised and
not necessarily answered about our justice system.

Running simultaneous with all of the above, is the near-fatal
breakdown of Hettinger. He feels massive guilt about turning over his
gun (a new policy gets introduced after the onion field incident where
LAPD are to turn over their gun for no reason) and not doing
anything to save his partner. He begins shoplifting as what could only
be a cry out for punishment, is eventually caught and forced to resign.
His wife (who is painted as a saint in the movie) sticks with him as he
continues his downward spiral. In one of the more painfully Ruthless
scenes this reviewer has ever seen, Hettinger–while drunk–beats his
newborn child because it won’t stop crying. No luck as the baby cries
even louder. After a few more wails from the kid, Hettinger has a gun
in his mouth. 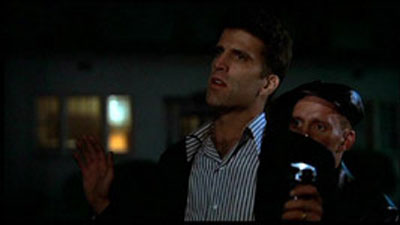 Without going too much further into the plot, I think it is safe to say that while epic in scope, The Onion Field
never makes the mistake that so many similar films do by getting heavy
handed. By trying to teach a moral lesson of some sort or attempting to
create some meaning where none exists. Instead, much as life is, The Onion Field
simply exists. And in the best sense of the phrase. Here is what
happened, here are the people that made it all happen, here is the
senseless aftermath–make of it what you will. As I mentioned earlier,
there is decidedly unromantic banality to the whole affair, which
coupled with the realism that Becker shot the film with, proves to be
quite exhilarating as you just have no idea where it could all lead. By
film’s end, you feel no sympathy for any of the players, and are just a
little sad that Campbell is dead. But not that sad. The feeling is akin
to reading about a tragedy in a newspaper. That sucks, but look,
Beyonce sprained her ankle… Only here in The Onion Field, you a brought in a little closer than you might normally care to be. Summation: a fine film worthy of your time.

Note: Many Ruthless thanks to Crabclaw24@mammymammy.whatever for bugging the shit out of me to review this.