Faststeady: I found my old footy card collection and after spending a few hours flicking through them, it seemed sensible to educate those foreign to Australia’s national sport on how it works.

L. Ron Mexico: OK, this should be fun, considering I thought yalls national sport was shooting kangaroos out of the back of a 4×4.

RM: Is a “brumbie” a racial slur? You guys have so many.

FS: A brumbie is a wild horse, stay with me Ron, it’s about football. 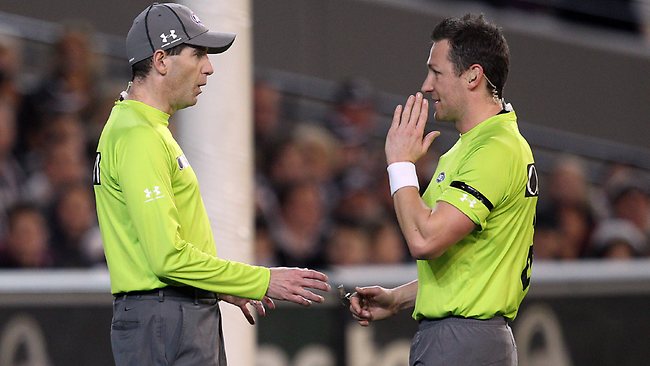 Firstly, the modern Australian rules game is basically a game of keepings off.

It’s my team’s ball and I’m not going to give it up to the opposition.

In our game, you can keep hold of it as long as you want and it is up to the other team to get it off you.

RM: I’m guessing “get it off you” means like an interception or fumble recovery.

FS: Yep, or a tackle. You have tackles too, so I know you get that bit.

There is no offside rule like in kickball to stop teams attacking. None of this strike 3/4th down shit either. You can move the ball backwards sideways and forwards as much as you want, for as long as you want. Just try to keep it.

RM: So it’s just like American Football except there are no rules and everybody is white?

FS: No, not everyone is white, in fact an Indigenous member of our society called Buddy Franklin will be the highest paid player next year. He has his own shoes called “Buddy Boots”, an Aussie version of Air Jordans.

RM: So I guess those guys are pretending the ball is a baby and the opposition are dingos?

The handball is an important part of the Australian game. This skill was sparingly used in the 60’s and 70’s and even less before then, but in the last 10 years the handball has made a revival and become the primary driver in moving the ball forward into attack quickly.

FS: Throwing is a cop out Ron, there’s no skill in throwing a ball. Even women comedians can do that.

You place the ball in the palm of one hand, and with the other hand you punch it to your team-mate, not like a boxing punch you use the side of your fist as demonstrated below. This was before gym’s sailed out here and sports science and peptides got involved. It was an innocent time.

Obviously Alan isn’t very good at executing this skill but was still happy to give it a go.

RM: I think I see how this move developed, “Hey mister Aborigine, would you like this loaf of bread? Sike!“

A skill that isn’t entirely unique to Australian football but we have our own little way of performing  is the baulk. I’ll quote wikipedia here for the short explanation of this skill before elaborating on the way it gets applied or dealt with in reality.

the baulk– a manoeuvre where a player holds the ball out to the side in one hand, then runs in the other direction to evade a defender.

In reality, the baulk is a very dangerous move to want to pull off.

It’s considered taking the piss out of the defender coming in to tackle you and we are taught from a very early age to watch the hips when going to tackle so if a player goes to baulk you, it opens him up for either a shirtfront or a nice coathanger, WWE style. The other thing is, when you go to baulk you are so fixed on doing a number on the guy coming at you that you don’t recognise what is lurking in the area.

RM: So a “shirtfront” or “coathanger” is like getting lit up by a strong safety?

RM: What is the eyes move? Are you talking about the  meth eyes those guys have below?  Also, when somebody gets coathangered here in the states, it’s usually because they were raped by their uncle.

RM: so basically, all the bad guys from Revenge of The Nerds run around coathangering people. I’d pay to watch that.

Ok, we call it marking, not catching for starters.

We have two types of marks, one is called the chest mark and the other is just called a mark. Basically because air mark sounds dumb.

RM: I’m going to say, Bernie is doing a Simba Mark, Dougie dropped the baby in the dingo pit, and John can’t shit without his ball.

Aussie rules is also an equal opportunity employer. We have quite a few races and religions playing at the top level. If you are good enough to play AFL at the top level, it doesn’t matter what your disability is.

FS: Yep, although we call them Ranga’s, so there’s hope for you yet. Wait till I show you Conan the Sudanesian.

RM:  It’s hard to tell the names from the positions.” Hi, My name is Scanlens Essendon and I play for Wayne Primmer. Lets go drink some amber water and hunt boomers by the billabong. We can cook them up for brekkie with some chokkie and chook. We can eat so much until we chunder out our freckles!”

FS:You lost me a bit there, isn’t it obvious that Winger Essendon plays for Tom Park?. Shit Ron, let me try to simplify this and show you a typical football passage of play which involves most of the skills I’ve mentioned so far.

Here, Tucky gets a handball  off to Cummo, who baulks and gets it  out to Bleth. Bleth kicks long to the square and Ricey comes out and takes a solid mark in front of goal.

RM: OK, I think I get it! I’m going to translate that to American: Brees passes to Colston, who jukes the linebacker and then flicks it to Lance Moore who is tackled short of the first down. Morsted punts to Edelman who fair catches it at the 20 while Aaron Hernandez rots in prison.

FS: So Ron, now that you’re up to speed with Aussie Rules, shall we move on to cricket and rugby?

RM: Wait…so footie and rugby aren’t the same thing?………. kidding, I knew that.

FS: WTF is footie Ron, is that a subtle backhander? We didn’t even get into how our scoring works, and how we have a really hot goal umpire named Chelsea, there might have to be a part 2!.