Yes! Finally, a show starring the woman who might be the best looking 38 year-old on the planet. I am of course referring to Pamela Anderson who stars on Foxs newest sitcom, Stacked. Call me old-fashioned, but I get sentimental when it comes to one of the hottest women my generation has had the pleasure of beating off to since puberty. Yes, my Generation Y readers, before Paris Hilton and her sex tape, there was a pornographic video of Pamela and Tommy Lee circulating the internet, and unlike Paris, who amassed her wealth as a brainless heiress, Pamela earned her dollars as a brainless model and actress.

Stacked is the standard “fish out of water’ comedy where airhead blonde Skyler Dayton (Pamela Anderson) tries to get along working in a bookstore among such intellectuals as a physics professor, a pretentious bookstore owner, and his horny brother. For the man who misses the level of pompous snobbery radiated by Frasier Crane, the show provides words like “meretricious’ and references to classics of literature (Sense and Sensibility, Tom Sawyer, Heart of Darkness, etc.) that serve to compliment the bookstore setting. For the man who enjoys the sight of a huge set of knockers, the show is sure to please. For the man who… well, actually all of the men I know fall into one of these two categories, colloquially known as “metro” and “straight.’

A show like Stacked is designed to revolve around its ensemble cast, but in actuality it comes across as a hot babe surrounded by a cast of nobodies (Ok, Christopher Lloyd isn’t a nobody, but what has he done since Back to the Future?) [Ed Note: Things to Do in Denver When You’re Dead, hello?]. The cast’s biggest name (Tom Everett Scott) was let go early in production. The only other woman on the show is an annoying fatso and she isn’t really even part of the bookstore. Rather, she makes coffee and complains to everyone about the woes of her accurate self-assessment of worthlessness in between stealing and scarfing down pastries by the dozen off camera, serving to make Skyler even hotter by comparison, which is her only real function.

The title Stacked is an obvious double entendre that even the show’s own teasers exploited all spring. It was as if Rupert Murdoch wanted me to sit at home and exclaim “OMG are they referring to the books and how they get stacked, or Pamela Anderson’s enormous, voluptuous hooters that every man in America wants to tit-fuck, Wednesdays at 8:30 pm, 7:30 central?!?!?!’ Check out the official website to see a suggestive photo of Pamela herself (sans the rest of the cast), as well as the catchphrase, “A comedy series that proves you can’t judge a bookstore by its cover girl.’ Finally the network known for pushing the envelop of raunchiness gives us a show about a hot babe while marketing it under no other pretense. It’s no surprise that Fox signed the show even before the pilot was made, simply because of Pamela. 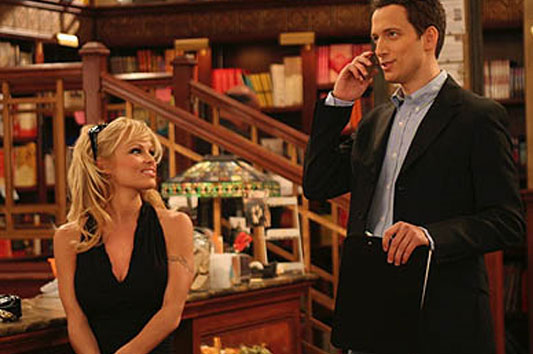 Now, I enjoy sex without substance as much as the next guy, so I am not going to spend so much as one moment complaining that Stacked treats Skyler as a sex object who wears revealing clothes, discusses sex frequently, and is followed by the camera each time she bends over or climbs a ladder. The only further step Fox could take would be to simply cut the dialogue and have the camera follow Pamela around for 30 minutes. Hell, I’d still watch it. Her hooters are the only necessary and sufficient reason that has me tuning in week after week. But honestly, some of the jokes are almost clever enough to create the pretense that one is watching a comedic sitcom rather than an exhibition of tits and ass. Almost.

Skyler wants to get hired at the bookstore. Hilarity ensues.

Plots like this compare to the intricacies of an episode of Seinfeld about as well as a steaming pile of gorilla shit compares to Thomas Mann. Additionally, one gets the impression that Pamela is not really acting, and that she is merely playing herself on the show. However, this is only a possibility if her real self includes the following;

If Pamela’s real life does not consist of such activities then indeed what she does on the show can be considered acting. All that’s missing from her character are some frank discussions on hepatitis c and a hatred of fur clothing. All in all, the show is not too bad… but really, not too good either. However when it comes to watching Pamela Anderson cavorting about for a half hour, what better way can a guy spend his time?