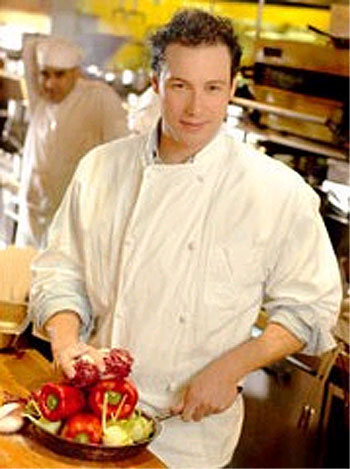 The most surprising thing about “The Restaurant” is that it made it to the air. How did this one get past the network execs?

TV Dude: We want to do a show documenting the opening of a new, somewhat high-end restaurant in the cut-throat world of New York dining.

Evil, yet Realistic, TV Exec: Document? I don’t like the sound of that one bit. Take it to PBS.

TV Dude: No, this is reality TV!

Evil, yet Realistic, TV Exec: Now you’re cooking with gas. How does the bimbo win the million dollars? Who gets voted off and when?

TV Dude: No, this show is about a restaurant.

Evil, yet Realistic, TV Exec: “About.” I don’t like that much either.

Evil, yet Realistic, TV Exec: What, did someone hand you a list of words I don’t want to hear? Look, our evening news doesn’t even have anything resembling content. Our lead story tonight is, “America is Super!” Then there’s a piece about the pros and cons of waffle cones. And you know what all of our focus groups say? The news is too intellectual.

The above is basically my way of saying I very much like the premise of this show and am glad NBC gave it a shot. I think it got on the air because they managed to round up so many advertising tie-ins. Some of these were tolerable. The American Express ads were slightly less boring than the other ones. Plus, small businesses and restaurant patrons do use AMEX’s services and the show has to be paid for somehow. No problem there.

But Coors Light? I laughed out loud at the shot of a crate of “The Silver Bullet” being unloaded during the opening credits. Mostly because the shot stuck out so much. It was just so blatant. The shot is perfectly straight, the logo perfectly in the center of the screen? it looked like it was shot by a six year old. Not to mention that diners at upscale Manhattan restaurants order Coors Light slightly more often than they order Hawaiian Punch.

The Appearance of the “Coors Light Twins” was equally forced. The staff is wowed – but anybody who’s been in NY or LA for more than 20 minutes would barely consider these girls celebs. What happens on the next episode? Does everyone fall all over themselves trying to get an autograph from the Micromachines Guy? Does Chef/Owner, Rocco “Siffredi” prepare a special sandwich for Jarod the Subway Guy?

The wedging in of the “Coors Light Twins” (I didn’t even know that they had a moniker) wasn’t the only thing on the show that felt contrived, and this is the real problem. Some of the deadlines seemed artificial. “Our grand-opening is in 20 minutes and we don’t have any tables!” Don’t real restaurants wait until they have tables to open? And could the staff really be such incompetent, whining bunglers without the producers taking a hand in the selection process? The waiters have one responsibility in preparing for the opening: learn the menu. None of them do it. Rocco pop quizzes some of them with brain busters like “tell me about the chicken parmesan.”

Rocco exasperates the artificiality of the show by constantly playing to the cameras. He brings his mama into the kitchen so she can parade around and say “thatzza spicy meatball” a few times. Producer’s suggestion? Probably. But I think Rocco himself came up with the little speech about the horrors of growing up as an Italian-American, as though it were 1870. “I can finally be proud of the name Rocco.” Now, if only we can finally cast off the yolk of oppression from the Irish? Rocco clearly believes himself to be the next Food Network celebrity chef. Of course this show has made him famous, probably temporarily, but give me Malto Mario any day.

But back to my original point, in spite of it’s myriad flaws, this show is a step up for network TV. It is sort of cool to watch a big restaurant open, even if everyone involved is an ass. (I actually liked the French Guy who manages the place though. When one of the prima donna waiters falls and fucks up his arm, The French Guy says, “that’s life. Go home.” Beautiful. Ruthless.) Basically, this show defines the difference between reality and documentary programming. Reality programming puts real people into contrived circumstances and manipulates everything to maximize entertainment (supposedly). Documentary programming attempts to give viewers a look at realities they otherwise wouldn’t see. Even something like “1900 House” fits in the documentary category, in spite of its experimental premise because it aspires to show us truths about the past and the present. I wish this show really had been taken to PBS because it could have been really good. Instead, it’s just better than what’s on CBS and ABC during the same time slot.

FUCK THE RESTAURANT!!! Dude, Erich, your mind is slipping. You’re pulling one of those Roger Ebert, “Everything sucked and was crappy, but here are three and a half stars just because Scorsese directed it.” And here with The Restaurant, you don’t even have the excuse of a once great director. First of all, aside from the Amex© ads, and the Coor Light© ads, there was a fucking Mitsubishi© Ad in the opening credits! And not for big screen TVs, either. What the fuck does a Japanese automaker have to do with a Manhattan restaurant? That Rocco cat is a whore.

And he’s a fucking pasta-tute, too. He basically opened an Olive Garden for the breast implant-set and all that bullshit (as Erich said) about, “I used to be ashamed to be Italian,” was utter manufactured horse-crap. See, folks living in Twin Septic Tank Montana, might think Italians as an ethnicity seem exotic, but to anyone who has heard the term “role reversal” or used a Sonic-Care© our paison friends and neighbors are basically Wonder Bread©. And Rocco’s going on and on about his shame and new acceptance as if he was a Tuvokian or a Nazi were just outright lies. Of course, this being America, now that he has accepted his ethnicity, it is time to profit off of it – whore-style – via NBC®, Mitsubishi©, etc. What a fucking race-traitor. NIAF should stop worrying about the Sopranos and go after pricks like this Rocco guy.

Oh, and the show sucked, too. It was insulting to anyone who has ever worked in a restaurant. They literally hired morons to work the tables. “I can’t believe that customer wants a fork. What an asshole.” Actually, you know what? I had such a bad taste in my mouth from all the ®s and ©s that I don’t even give a fuck. I mean, what is so God damned realistic about major corporations giving some putz briefcases full of money? It would be just like if you or I started a business, right? Of course wrong. No one even bothered to mention that Rocco already had a fairly successful TV Career and that “Rocco’s” is actually his third restaurant. May all the dumb-ass corporate shills involved with this newest and lowest piece of “reality” trash go hungry.