Perhaps it is a bit late in the game to be spoofing Cops, but Comedy Central’s Reno 911 is worth the wait. While I’ve only seen a handful of complete episodes, from all appearances the show contains a healthy mix of satire, rudeness, politically incorrect stereotypes, and vulgarity to spare. It’s a television program for the same people who enjoy the voyeurism of Cheaters or the shock value of Crank Yankers (of which I am one, thank you very much) and want to laugh at low-brow absurdity.

The show involves the lives and work of seven Reno, Nevada officers, shot in the same verite style as Cops. We follow the officers on domestic violence calls, accidents, public drunkenness arrests, and the occasional paint ball shooting. We also watch the cops prepare for the day, demonstrating that it is a rare occasion indeed when they know what in the hell they are doing. While the “work” they do is standard fare, it is in the “personal segments” that the show truly hits its mark. These scenes play with a deadly seriousness, even though they resemble a ridiculous soap opera more than anything heartfelt. Like one character petitioning the cemetery where her mother is buried to “keep the Asians out.” 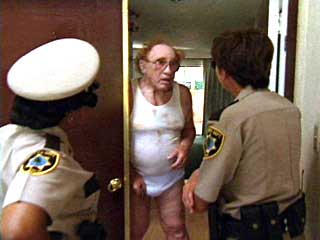 Williams and Wiegel Interrogate a Perp.

As expected, the officers are all “types.” Dep. Wiegel is the resident nutcase, threatening suicide and throwing around racial epithets with a casual glee. Lt. Dangle is a latent homosexual, wearing the tightest, shortest shorts in the history of television. Dep. Junior is the flat-topped bulletproof vest and sunglass-wearing hardass, unafraid of telling a group of school children about anal rape and graphic murder. Dep. Johnson is the big-titted whore; Dep. Williams is the blacker-than-thou cop with an attitude and an ass so large, “you could rest a drink on it”; and Dep. Jones is the buffoonish, yet sensitive, black man. Of all the cops, only Dep. Garcia doesn’t register (maybe I haven’t seen enough episodes, but I don’t remember his character at all).

More than anything, the show works because it is childishly over the top and doesn’t apologize for it. Like when Wiegel tells a high school class, comprised of boys and girls, that, “all of you will be raped. That’s a fact.” Reno 911 is dumb in a Naked Gun sort of way, but it adds a level of outrageousness that keeps it a cut above the usual parody format. We get bleeped out language galore, but more than that we get lurid descriptions of gay sex, murder, and racial tensions. Dep. Wiegel is up front about her racism and we laugh because we simply don’t expect to hear such opinions on television. And when children stare unblinkingly into the eyes of an officer who is talking about finding a man’s severed testicles on the floor of a cell, we are overjoyed because it is exactly the opposite of what is usually “appropriate” for such an audience. At the very least we know that these child actors–some looking as young as 10–are being subjected to this foul language and I for one loved every minute of it. Especially when Officer Junior then told the kids how to make wine in prison that could be, “traded for cigarettes.” 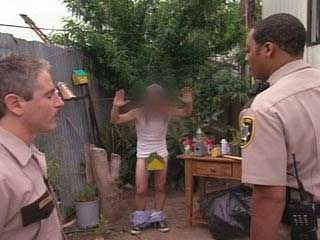 Garcia and Jonesy Catch a Guy Fucking a Birdhouse.
They Bust Him For Breaking and Entering.

Some of you may balk at my recommendation of such obvious junk, but I too enjoy a bit of trash in my day. Not everything can be Kurosawa or Dickens, and I always want to be the first in line to praise anything in our culture that risks offending someone in our oversensitive landscape. Judging by the direction Reno 911 is headed, this shouldn’t be a problem. For, in the above-mentioned episode the officers stumble upon a man handcuffed to bed with a dildo strapped to his head. He defends himself by screaming, “You don’t know me! You can’t judge me!” Then he explains how his sexual fantasies involve unicorns. In another episode, Williams the slut thinks she is pregnant. The search for a daddy for her baby even includes the registered sex offender she has to escort door to door because of Meagan’s Law. Brilliance? My only hope is that in future episodes, the show is even more willing to sacrifice everything we hold dear for a cheap–make that extremely cheap–laugh.