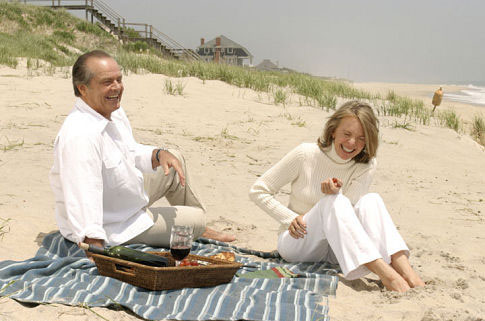 It is a hard and fast rule of Hollywood that bad boys must be tamed, and the sexually adventurous must be brought to their knees in shame, or at least mild humiliation. That rule is alive and well in Nancy Meyers’ Something’s Gotta Give, which is passable to a certain extent, but as unrealistic as they come, even for a romantic comedy. Everyone we meet is charming and successful, attractive and articulate in ways that make our own lives seem pathetic by comparison. But is that not why we go to the movies in the first place? I do not find it offensive that people with great wealth and talent are inventing problems to act as distractions in their otherwise trouble-free worlds, but I am troubled by the iron-fisted belief that those who have healthy sex lives and “play the field” are somehow empty, or in need of correction by a morally superior member of the opposite sex. The character in question, Harry Sanborn (Jack Nicholson), is a music mogul — both fascinating and glamorous — who sleeps with gorgeous young women and at first, sees no reason why he should apologize for it. But apologize he will.

When we first meet Harry, he is dating Marin (Amanda Peet), a young tart who inhabits the high-pressure world of Sotheby’s where she sells millions of dollars worth of art. She brings Harry to her mother’s glorious estate in the Hamptons, where the two are preparing for a weekend of wonderful sex. While changing into his swimming attire, Harry meets Marin’s mother Erica (Diane Keaton), who is both a world-famous playwright and a defiantly single middle-aged woman. Her own marriage ended in divorce, although her ex-husband continues to direct her plays. She has given up on finding true romance at her age, and is little more than disgusted by her daughter’s fling with a much older man. 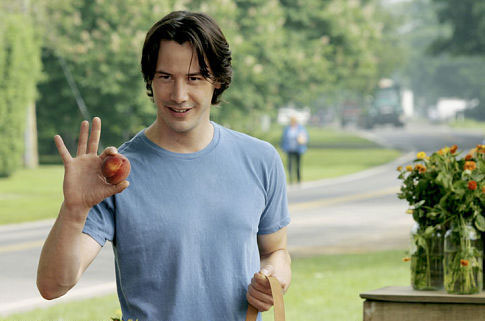 But, as we know if we’ve seen a few romantic comedies over the years, a contrivance will interfere with the proceedings that will bring Erica and Harry together whether they want to be or not. In this case, Harry has a mild heart attack while in the bedroom with Marin, and is rushed to the hospital. Harry is told to rest for several weeks, which of course means that he will be staying with Erica in the Hamptons. Marin is too busy to look after Harry, so Erica becomes his caretaker, which leads to the predictable “knowing glances” and “deep conversations” where the two come to know each other without labels and expectations. As Harry rests and restores his health, he connects with Erica in unexpected ways and the two fall in love. They even share a satisfying sexual experience, which is rare enough in the movies, but doesn’t really count as revolutionary because it involves well-known actors whom we all know and love. After all, I seriously doubt that Hollywood would count on people to pay good money to watch anonymous senior citizens roll around in the sheets. We aren’t really watching older folks get it on; we are watching Jack and Diane. At any rate, Erica begins to believe in love once again, and Harry begins the slow process of changing his ways.

But until true love must triumph, the tried and true obstacles must be placed in their way. Wouldn’t you know it, but Erica also meets a young doctor named Julian (Keanu Reeves), which is surprising only in that we are asked to believe Keanu could get through medical school. Julian is charming and suave, and Erica is flattered by the attentions of a much younger man. And then Harry falls back into predator mode, doesn’t appear ready to commit to Erica, and is even caught in a restaurant with a young babe. But we do watch Harry go through assorted crises, as he appears to want Erica, but keeps her at arm’s length. He even suffers through a few more imagined heart attacks, which are nothing more than panic attacks associated with his overwhelming feelings of love.

But wait! Erica has seemingly moved on, deciding to go to Paris for her birthday just as Harry was meeting with all of his old flames to clear the air and his conscience. Not wanting to let her get away without at least an explanation, Harry flies to France and finds her exactly where he expects her to be, a restaurant she had mentioned in a previous conversation. But wait again! She is there with Julian, and Harry is humiliated once more. He leaves the restaurant and wanders out into the night just as it begins to snow. As he comes to terms with his loss, there is Erica in a cab, ready to take him back. And how did Erica know exactly where Harry would be in a city of several million souls? Need you ask? This is Hollywood, and only hardened cynics care about such details. Well I’m asking and I think it’s a bunch of crap.

So there we are, left with Erica and Harry together at last. Not only that, but Marin has met a new man and started a family. It speaks volumes that her husband is a dweeb, and suggests that the only choices women have are either cheating dogs who live the high life, or faithful, dull accountants. And the ending — complete with Harry playing with Marin’s perfect baby — also suggests that the only life for a man is one of domesticity, where grandchildren are enough reward as the twilight years approach. And another thing, given that this was written and directed by a woman: must all men who live well, eat well, drink well, and have great sex with hot women, always suffer for their crimes? Must they always have heart attacks, panic attacks, moments of pain, and deep regrets? Must men who lust for young pussy always be the targets of our political correctness, whereby an erection is seen as the greatest threat to freedom and stability? Of course, Harry could indeed be empty and shallow and just might be better off with a sophisticated woman his own age, but must it always be so? We are now at the point in our culture where a never-married man of a certain age is either a narcissistic creep or gay. So why do unmarried women think they have it so tough? 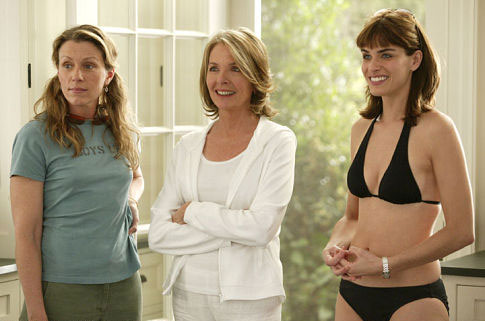 Despite everything working out for the best and every character getting what he or she deserves (at least according to a female director), the film is far from terrible. While it is way overlong and could have used a good 15-20 minute trim, I wasn’t bored. That said, I wasn’t overly entertained either. Something’s Gotta Give is one of those middle-of-the-road movies that left me indifferent, which is arguably worse than if I were nauseated and brought to the brink of suicide. At least with the My Boss’s Daughters of the world I am pushed to feel something, whereas with the merely average I forget what I have seen almost immediately. And yes, the performances are fine (although I would not nominate Keaton for an Oscar as some have suggested) and the script clever in spots, but the entire thing has no real reason to exist. In the end, it’s just another movie.