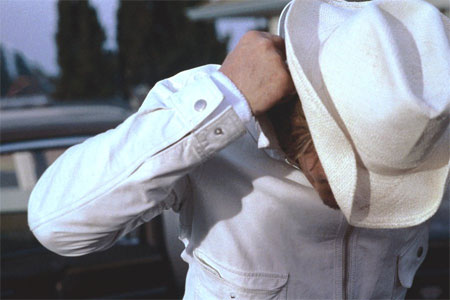 Spun is ostensibly about the pitfalls and perils of crystal meth. Allow me to just take Hunter S. Thompson’s tack here and say, “I hate to advocate drugs, alcohol, violence, or insanity to anyone, but they’ve always worked for me.” Serious, last time I did speed, it was fun for about 24 hours, I had some mind blowing sex, watched the sun come up, missed a day of work and then got on with my life. Big fucking deal. Not in Spun, though. No! Drugs are bad, bad, bad, bad, bad! You’re going to almost die constantly if you do drugs! Cause they’re so bad! Liberal Hollywood my ass. Spun was either funded by the DEA or the D.A.R.E program. Actually, if the government had made it, Spun would have at least be coherent. 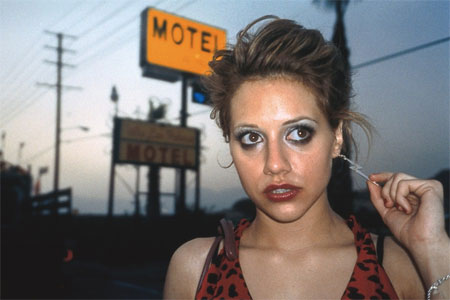 You sure this will boost my indie cred?

If you do meth, you might get shot in the nuts, you might get hit on by Rob Halford, your dog might turn green, you might jump up and down on the bed while jacking off to phone sex while your girl is constipated in the next room, you might tie a girl up in your apartment with duct tape over her eyes for four days, your meth lab might blow up twice, Debbie Harry might break into your apartment or you might have to star in a stupid, shitty movie where all the music is done by Billy Corgin. The best you can hope for is that Ron Jeremy might sell you a beer. See, the actual purpose of Spun is an excuse for the dip-shit Swedish director to attack American youth culture, show off his B-list friends (no offense Ron, Rob) and let Britney Murphy live out the now-en-vogue Hollywood fantasy of pole-dancing/pretending to live in a double-wide. This guy (Åkerlund) cares about drug-addiction like I do about tithing.

What astonishes me the most about Spun, is that unlike the equally crappy aforementioned Doom Generation, the cast here is made up of actors who have all been in excellent movies. Seriously. Schwartzman ruled in Rushmore. Britney Murphy, who has made some recent and dubious choices in work, has done some good films. Mena Suvari was in American Beauty. John Leguizamo, while notorious for picking the wrong script, can at least be the highlight of an otherwise terrible film. Plus, he was real good as Toulouse Lautrec. The Fugit kid did well in Almost Famous. And finally, Mickey Rourke, well around here we can just watch this guy read from a phone book. But he did do Barfly and A Prayer For The Dying. And there will always be Angel Heart. The point of the above list, is that every one of these people has been in a good movie. Fine, not Leguizamo. But surely, the cast must have realized while making Spun that the film was just going to be an out and out piece of shit. They must have [Ed Note: No, actors are as dumb as you thought]. 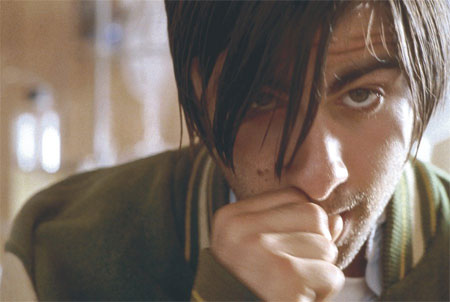 Wes? Wes, I’d love to work with you again. Call me, please!

Other stuff that got my goat. Why would a putz-loser like Schwartzman’s character have two super hot girlfriends and get smooched by Murphy? Oh yeah, cause the movie is pure fucking fiction. Why did the director have to show close-ups of the car door slamming, the engine turning over and Schwartzman’s feet on the pedals EVERYTIME THE CAR MOVED? At first I thought he was trying to make some sort of metaphorical jab at the fact that speed makes one’s body machinelike, etc. But then I just realized that the director fucking sucked. Really, he does. Åkerlund’s career before this includes work with the Smashing Pumpkins, Madonna and Moby. Three artists who could be found dead tomorrow for all I care.

In truth, Spun is very similar to watching a music video about a pretentious, self-consumed “artist.” I got the sense that the director, the younger element of the cast and for sure the writers really felt that they were doing high art. It sickens me to think of how brain dead and frankly out of it the assembled cast and crew must have been. I bet they were all shocked that their little masterpiece was so poorly received by the critics. [Ed note: 17% on Rotten Tomatoes] Of course, the makers of Spun are forgetting one thing; Spun sucks. Don’t be fooled! Just because it is about illegal drugs doesn’t mean it is deep. Just because a guy sticks a needle in his arm, doesn’t mean that the movie has anything relevant to say about drug use. It is like when a “thriller” starts listing out shit found in the Book of Revelations. So what? It means nothing just because it is pop-culture hermetica. Spun has less depth than a kiddie pool.

Arghh! I hate this movie. There is absolutely no new ground covered here, save for some really cheese-ball Flash animation, which is itself a dying art form. Also, what’s with the only stereotype not being Ruthlessly Re-enforced is that black guys have big dicks? Serious, isn’t 2003 these days or something? Oh, and what’s with every fucking stupid-ass millionaire-before-they’re-twenty young actresses jumping with glee at the chance to play “white-trash” characters? I talked a little about this phenomenon way back when in Julian Donkey Boy. It is really disingenuous and frankly a little sickening. Stick to playing rich, fucked up brats. It is much more believable. I’m talking to you, Suvari/Murphy. Or at least work with directors worth a squirt of piss. I’ve given Spun way more thought than it deserves. Suffice to say, there are ways to do movies like Spun well. This example though, rots (It sucks).