Home / Reviews / Movies / THE SQUID AND THE WHALE

THE SQUID AND THE WHALE 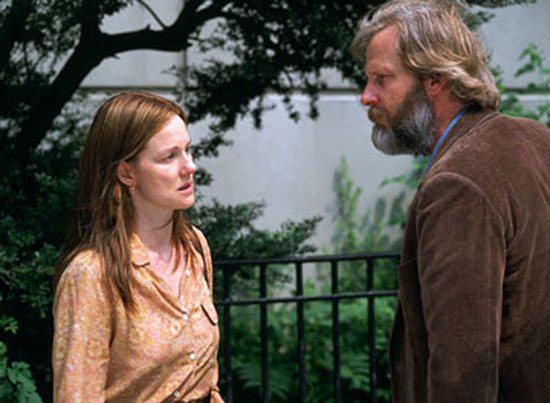 The Squid and the Whale is definitive proof that even Wes Anderson can be tolerable, so long as he abandons the directors chair and acts as a force no more intrusive than producer. True, the films director, Noah Baumbach, co-wrote the snot rag that was The Life Aquatic With Steve Zissou, but here, despite a title that begs to be dismissed with a sneer and a huff, the pair manage to dial down the eccentricities and submit a work of humor, yes, but also understated emotion. This is not, by any means, a masterful exploration of life, love, marriage, or adolescence, but unlike so many so-called independent releases in these dark days, it largely rings true, creating characters that are often smarter than the rest of us, but not so much that we can see the screenwriters hand. And it whips by at a shade over 80 minutes, which is yet another welcome blast against the current trend towards self-indulgence. As such, there are no lingering shots, unnecessary asides, or self-conscious tricks to remind us that the director is a few months removed from film school and wants to justify the choking expense to his parents and personal investment of time.

The film floats along, though not without consequence, and thankfully supplies a memorable gentleman by the name of Bernard Berkman, played by a wonderfully dry Jeff Daniels. Bearded, arrogant, and hopelessly vain, he earns our support not by overplaying his hand, but acting as if hed rather be anywhere else. The deeper he retreats into his elitism and judgmental snobbery, the more we embrace his vision as the one wed like to share. As a professor of English and part-time novelist (once successful, now waiting in vain for a new publisher), he inhabits every expectation we have of the bemused academic. His life in the classroom, surrounded by books, theory, and impressionable young minds, is as much of an escape as the mind-gutting world of popular culture he so despises. Every conversation is an opportunity to validate his own superiority, and every relationship is a battle of wills; the very kind he expects to win each and every time. Even his oldest son, Walt (Jesse Eisenberg), has absorbed his habits of sneering self-satisfaction. Walt parrots his fathers opinions of literature, trusting the old man so much that he feels no need to read the books himself. There is clear hero-worship here, but more than that, the lad has observed that, at least until some bad news later in the film, his father glides through life seemingly untroubled by everyday concerns. The man is calm, assured, and at ease, so what better advertisement for emulation could there be? 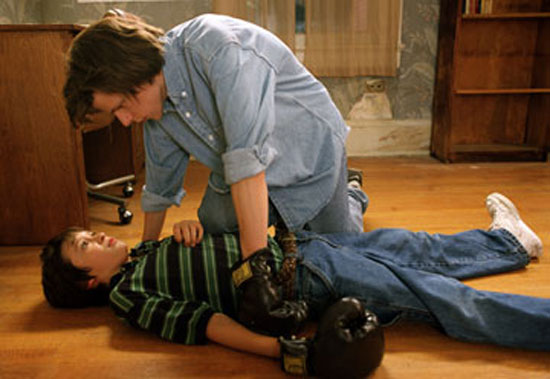 The bad news, needless to say, is that Bernard and Joan (Laura Linney) are getting a divorce, though it is far from a mutual decision, despite appearances. Joan has been cheating on Bernard for years, though from Bernards flirtatious attitudes around his students, one suspects that hes dabbled a bit himself. Its also possible that Joan grew sick of being at the short end of every encounter, even though she too has started to write, meeting with success and a published story in The New Yorker. Still, writing itself does not seem to spring from Joans very being, and were she to meet with failure, it is likely that shed shrug it off and do something else. It seems to be fun for her, while for Bernard, each and every sentence springs from a tortured soul, which is part of his insufferable persona. People like Bernard write not to entertain, or even instruct, but rather to convince themselves that they are vital and, in many ways, indispensable. With a world hanging on his every word, he just might live forever; or at least stay in the headlines. As always, art springs from a desire to achieve immortality, though most are cursed with more ambition than actual talent. Bernard may indeed have the chops, but we dont hear enough of his work to judge fairly. Still, hed be the first one to provide reassurance.

While Bernard wearily pronounces his displeasure with the separation, Walt begins his own journey of romance, although his girlfriend is less a partner than a test case for his inherited assumptions. Hes critical of her looks, constantly asks others (especially his father) for validation, and in the end, dumps her because he feels entitled to something better. What that might be he could not say, but like his father, he first assumes dissatisfaction, then works back to find his fears justified. He is overly tough on the girl (hes condescending when not instinctively mean-spirited) because he knows that his father would approve. The old man even encourages him to sleep with her once, see how it is, and move on if need be. For Bernard, women are a prop for mans colossal ego, and despite claiming to want an intellectual sparring partner, what he really wants is a wide-eyed devotee who worships quietly and without contradiction. The man is even beyond accepting a challenge, as he doesnt believe such a thing is even possible. And why not prey upon nubile young students? They are tailor-made for the very purpose of seeking help and requiring guidance. And if she also happens to be played by Anna Paquin (aging quite nicely, thanks), the situation practically handles itself. You havent lived until youve heard Jeff Daniels command Paquin to put me inside your mouth. 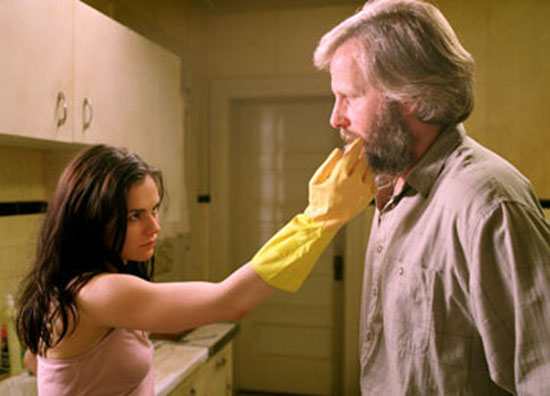 And sure, there was absolutely no reason why the film had to be set in 1986, for nothing was done to date the story or its surroundings (another unexpected turn, as movies desperate for life usually rely on silly fashions and haircuts to distract us from the fact that nothing else is going on). Walts talent contest experience (where he passes off Pink Floyds Hey You as his own and wins the top prize) also could have been trimmed, but in some ways, it stands as a symbol of what Bernard unintentionally teaches his son through example — its not terribly important that you know, so long as the other guy is convinced that you do. Why not steal someone elses work, when father provides you with opinions about books youre implored not to read for yourself? A Tale of Two Cities can be dismissed as minor Dickens not through study and analysis, but as a sound-bite to impress the uninformed. And when Bernard relates an anecdote about sex to his son, somehow its not complete unless he drop George Plimptons name into the mix. He collects conversations, characters, books, and stories not to learn about himself or humanity, but as armor against a world he pities from his ivory tower. If Bernard read the works of the giants for what they said and not to impress dinner guests, his life might not be in such a state of disarray.

In the end, Bernard suffers a collapse (though its not a heart attack and there are no tearful scenes at his bedside), Joan has a new boyfriend, and Walt has learned how to face his fears. Perhaps his change was a bit heavy-handed (something involving a museum exhibits display of, you guessed it, a squid and a whale — a painfully en vogue and currently overused image I might add), but its a small flaw in a movie that — remember — I should have hated. It all comes to an end quite suddenly, which is wise given the temptation to clean up every last shaggy end. Im not sure where these people will end up, and Im glad for the confusion. The film we have just seen, then, is just a slice, and we happened to catch them when they were going through some particularly tough times. No one spoke beyond his or her station, cleverness flowed from a native wit rather than a scribes pen, and the biggest asshole is allowed to be the most interesting person on screen without having to sing for his supper. Sometimes being pleasantly surprised, though not overwhelmed, is enough. Im sated.