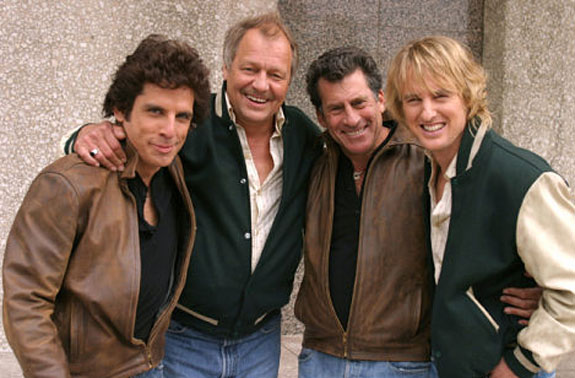 God Hates Us All

The two scariest words in the English language? John Ashcroft. Vying for second place? Todd Phillips. Remember that name, cause this motherfucker is out to sin. He directed this idiotic buffoon-fest and I’m sure some asshole studio exec is about to hand him another briefcase full of money and give the fucker carte blanche to do his worst. His past crimes include Road Trip, a very forgettable Tom Green vehicle and the deeply unfunny Old School, the most overrated film of the last decade. I just checked, and Mr. Phillips is set to start work on the Six Million Dollar Man with none other than Jim “I was funny as Fire Marshal Bill” Carey in the lead role. Oy Veyasmere… Matt Cale, as he often does, summed up my problem with Starsky & Hutch best when reviewing Adam Sandler’s latest horror-show, 50 First Dates. Mr. Cale explained that the film was nothing more than Sandler and friend’s home movies. Ex-fucking-actly. Truthfully speaking, Starsky & Hutch is nothing more than an excuse for Ben Stiller and his boyfriend Owen Wilson [Ed Note: Owen, you can do better] to play dress up and drive around in a life-size Matchbox Car. Fuck man… It is hard to even start this one properly. OK, there are two running jokes in Hutch; one is the 70s, get it? The other is “It’s not a boat–it’s a yacht!” I don’t even know what the fuck I’m talking about.

So, because Ben Stiller fucking sucks, this film is a “comedy.” Oddly it had a few funny moments. The first was the bad guy (Vince Vaughn, who should also be put out to pasture then shot) saying, “I promise, I won’t kill Terrence again.” That line was said right at the beginning and or the briefest of moments I had a glimmer of hope that this movie wouldn’t be an absolute waste of my time. But then of course, Vaughn and his partner hold a meeting where they explain to an assembled crew of baddies that they have invented (genetically engineered?) a new type of cocaine… I can’t even finish the sentence. Point is, the movie is retarded. All right, all right, I’ll finish. It is a new type of coke that is genetically different than normal coke. Dogs can’t sniff it. But it is still coke. Get it? The other funny part is when Stiller offers his badge to the Stupid Chief and then immediately takes it back, explaining he was kidding. There were maybe four or five other parts that made me chuckle. But for a nearly two-hour comedy (which felt like seven), that’s pathetic. 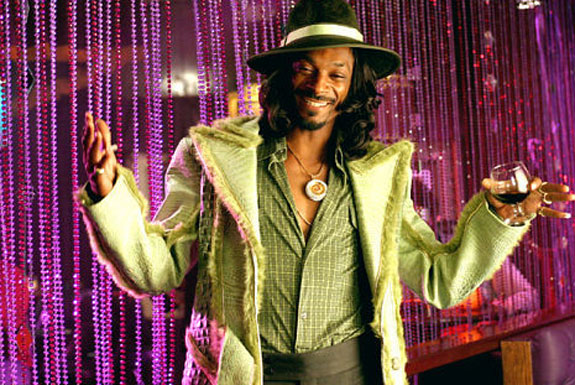 Some of you might write in to tell me “U suk azz. How can u laugh an still h-8?” Look, if you watch an entire episode of Saturday Night Live, a show that is responsible for more rotten movies than even Bruckheimer, you will probably chuckle a few times. And therein lies the problem; you pay ninety minutes and you get half a dozen laughs. That’s one laugh every fifteen minutes. On a good night. Which is fucking pathetic. A good comedy, like Airplane, is consistently funny all the way through. A terrible comedy, like Starsky & Hutch might have the few and far between comedic spots, but the overriding wretchedness (and tediousness) countermands anything else that might have been humorous. I think what I just wrote is my way of following the golden rule. Now I have to return to bashing this hunk of crap.

I found myself muttering “Oh my God” and ” Jesus Christ” every other scene. Which is insane when you realize what a devout atheist I am. For reals, you truly have to produce numbingly bad shit to get me to start invoking imaginary men whose soul function is to record semen spillage. One glaring example of this is Ben Stiller’s cocaine-disco adventure. So, the “fake coke” is sweet and when it doesn’t show up as real coke, Wilson puts it in his pocket. The two moron detectives somehow get Carmen Electra and Amy Smart to go home with them and Stiller starts drinking coffee. Only, Wilson is out of sugar, so Stiller uses the fake coke. Now, they got the fake coke from Will Ferrell, that disgusting no talent hack, whose character is in prison. Presumably, Ferrell had the coke up his ass, right next to his talent. I know talking about plausibility when it comes to lowbrow fare like this is pointless, but if some convict hands you a packet if white powder, would you put it in your coffee. You would? Oh, your brain fell out of your fucking ear? I see. 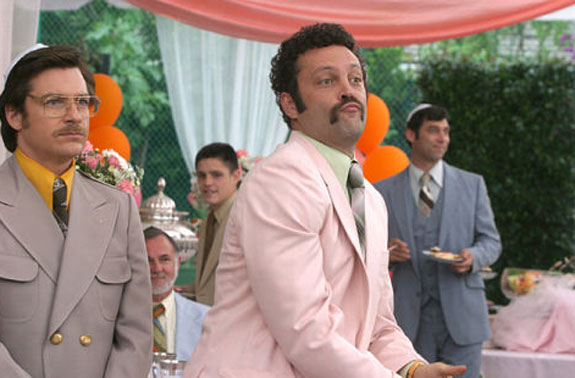 Stiller then goes insane. He behaves as if he is on PCP. Look, I’ve done more coke than four out of five people and cocaine does not make you act like that. No effing way. And the really horrible fact is that every single person involved in the making of Starsky & Hutch has done ten times the coke I have. The fucking guy holding the boom mic knows better! Anyhow, the midget-moron clown jester starts bouncing up and down and rubbing his nose and teeth–which is stupid since he drank it!–before he starts hallucinating and sees a blue cartoon bird. Man, I’ve taken some mean acid in my time and I have never seen shit like that. Then (naturally) he makes them go out disco dancing. Again, the scene is nothing more than just another chance to play dress up. Also, if you have two super-hot bitches (Well, Amy Smart is cute. Carmen Electra is a plastic surgery disaster and has had Dave Navaro’s penis in her mouth. Gross.) on your couch why the fuck would you go dancing? Oh yeah, you wouldn’t. Anyway, Stiller gets into yet another dance-off (see Zoolander) with “Disco Rick.” I guess “Disco Stu” is copyrighted. Or is that copywritten? Disco Rick is played by indie darling Har Mar Superstar who hopefully got a hell of a paycheck for prostituting his ass like that. Actually, I know Har Mar’s lawyer pretty well… man, I’m too upset to even attempt a lawyer joke (Hi Timmy). Ah fuck it, who cares? Rest assured, the scene ends in pure hi-jinks.

I guess I have to return to Will Ferrell. Matt Cale wisely talked me out of making Will Ferrell last month’s Cocksucker of the Month. Ass-face Sam Brownback deserved it much more, but still, after watching the insanely awful Anchorman I was seeing red. Blood fucking red. Dear America, Will Ferrell is not funny. He is not funny at all, not in the slightest. Not in any way, shape or form. Celebrity Jeopardy was funny only because people insulted Will Ferrell. That was the gag (no, I did not watch Saturday Night Live I downloaded the clips. Illegally). His only talent is playing gay men, which I guess is supposed to be funny cause he is such a flabby, gangly nebbish that you are supposed to be surprised when he makes a pass at a fellow character. The truth is that Ferrell must have somehow cast a spell over y’all, because I get into one argument a day about whether or not Ferrell is funny. He’s not funny. Ben Still isn’t funny and Owen Wilson, who was masterful as all get out in Bottle Rocket has now been totally infected with the latter two’s lazy, campy posturing that is supposed to pass as comedy. Er, Owen Wilson is not funny. Here in Hutch Ferrell plays… a gay guy! Didn’t see that one coming, you fucking hack assholes. One more thing–fuck Will Ferrell. 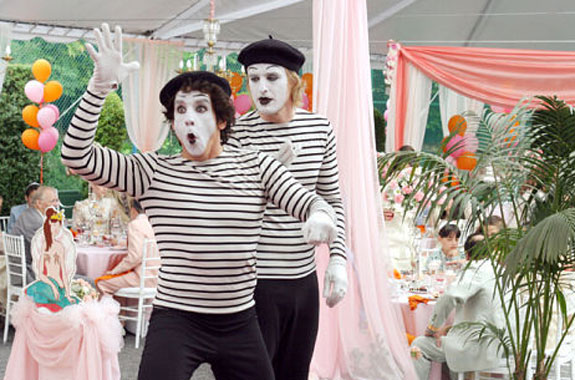 Besides talking to myself about made up supermen who live in outer space (God and Jesus), I found myself asking the recurring question, “Why don’t Stiller and Wilson just suck each other off and get it over with?” Serious, that thought raced through my mind at least a dozen times. I don’t know what it means, and I am scared to find out. The ending of Starsky & Hutch is as inexplicable as it is dull (Snoop Dogg hits Vince Vaughn across the face with a golf club after Stiller sinks his precious car in the ocean) and I am in a bad mood. Let me just end this review with a message to the overpaid, undertalented cretin screenwriters that came up with this crap. 70s music worked in Reservoir Dogs because nobody had fucking done it! Moreover, Tarantino actually selected unknown, non-completely cliché tracks to include on the soundtrack. I am sure you are confused by what I just said because you have only seen Pulp Fiction, but you need to drop dead. Stop writing movies, it only hurts people. I need to wash my fucking eyes out and go to sleep.