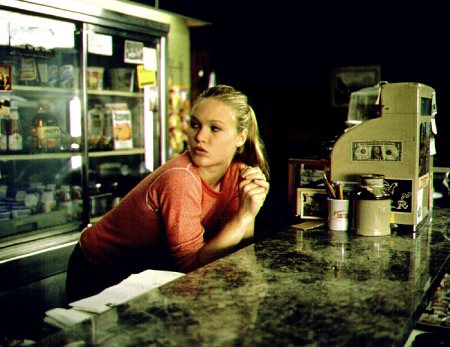 A major motion picture, staring Bob Barrenger and Claire Wellesley and directed by Walt Price, annexes a small New England town for use as a primary location.  Chaos reigns, largely due to Barrengers predilection for underage girls and the hostility of Doug MacKenzie, a local politician.

State and Main is a film that doesnt blind you with its brilliance, but is excellent on every level.  The writing is excellent; the jokes, the acting, the direction, the plot, the characters you name it, its excellent.

It is the subtlety of Mamets writing that lays the foundation for all of the other excellence.  Take one, low-key scene that is discussed on the commentary.  The big time movie production has turned Dougs life upside down.   Because of it, he has gone from being a somehat larger than normal fish in a small pond to a small fish in a small pond and he wants to strike back.  He is trying to place Bob Barrenger with Carla and have him arrested for statutory rape.  Carla has been in an auto accident with Barrenger but Doug has no evidence of it.  Hes sitting at a bar with the local doctor who casually mentions that hes pulled glass from the heads of three people.  Doug asks who the three are and the doc names Barrenger and member of the crew.  You said three.

Did I?  I think youre mistaken.

We wonder what the doctor is up to.  Is he dropping Doug a hint or is he covering up a mistake? Maybe hes just toying with the whole situation.  The acting and direction bring out such subtleties, but they had to first be in the script first.

The most enjoyable aspect of this film may be the characters and their rich phoniness.  Claire cons herself in order to con the production into giving her extra money to show her tits on film (something shes done many times before).  She both spares herself the knowledge of her own venality and finds an excuse to ask for more money by cloaking her greed in mushy spirituality.  Walt, on the other hand, is a virtuoso conman, able to hit the perfect note with any dupe from a small town mayor to a movie star.  But Walts phoniness is obvious–we can see him at work behind the smiles and corny lines and we know that his dupes are allowing themselves to be taken in.

My complaints are minor.  Mamets deliberately stilted dialogue is sometimes too sticky for my taste.  Initially, the character of Carla is great.  She goes through a magazine profile of Barrenger like a hit man studying the dossier on a mark.  She is clearly in control when the two interact.  Ultimately, however, she turns on him in jealousy because he is sleeping with Claire.  This rings false for me.  I see Carla as the predator, indifferent to Barrenger as a person.  I cant believe that he is able to emotionally wound her.

Be sure to watch the all of the credits.

The commentary, featuring about six of the actors, is quite good.  Macy, in particular, is very funny.  Giving portions of the commentary to several people keeps things fresh.  Nobody runs out of things to say.  There are insights into the film and characters, Mamet in general and the accuracy of the film as a spoof of Hollywood as well as stories about the making the film.

State and Main Boy. It is really funny for the first three quarters and then it gets really stupid for the last part. Stupid to the point of wrecking the rest of the movie. State and Main is like meeting a beautiful woman at a bar, and she is interesting and she buys you drinks and she lets you take her home and she looks great naked, but then she’s on the rag and won’t give you head. Also, they should have just said that Alec Baldwin is playing Bruce Willis and Sarah J. Parker is Demi Moore. David Mamet movies are hit and miss. Glengarry Glen Ross and Ronin are hits, where American Buffalo and Hannibal are misses. State and Main manages to both hit and miss. First of all, making fun of Hollywood is like pissing against a wall – you can’t miss, even if you try. However, you can spell your name if you do bother trying. Meaning what exactly, I don’t know, but I dug the metaphor. Which is sort of like State and Main. It’s funny and it shows us how despicable Hollywood folk are, but in the end it just sort of fades Which is why most people just say, “Yeah, it was good. I liked it” when asked about State and Main.

The commentary track is a vomit-fest with the lone, shining exception of William H. Macy, who was also the best part of the movie. Go figure. Sarah Jessica Parker should not be allowed to describe people as geniuses. I think she tells us fifty times that Mamet is a genius. Everyone else only tells us 25 times. If he is so smart, then why is The Heist so fucking bad? Macy is funny and actually swears and makes fun of the other actors. Everyone else just kisses Mamet’s ass. A lot. And they are all as boring as actors without a script to read from. Don’t listen to it.

Except Listening to Sara Jessica Parker try and justify her character with lines like, “I think she only knows how to be manipulative” and “I think she is a really savvy business woman” would be funny if you could sit through it. You probably won’t be able to, though. I wasn’t.